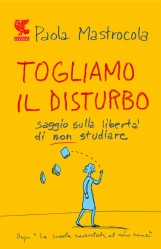 Paola Mastrocola is first of all a teacher, then a successful writer. Like me, she teaches in a Liceo Scientifico - though she teaches Italian and Latin, not English. Like me, she loves and has always loved her job. Just like me, she is more and more disappointed with what teaching teenagers has become. She says: "Do you remember that poor Japanese soldier remained shooting the air because he had not been warned that WWII had finished? Here I am. I am the last one who goes on teaching our own language, Italian. Why didn't they tell me they've decided it is useless"? This is just the beginning of her long, heartfelt, well-written  essay about school nowadays. School is useless, we teachers are useless, hence we'd better be off. Provoking title, "Togliamo il disturbo" ( we'd better go and stop bothering), "saggio sulla libertà di non studiare", an essay on the freedom not to study.

I'll try to translate for those who don't understand Italian: " This book is a fight so that culture won't leave our life and above all our school, making our future a desert. It is also an accusation to my own generation, who made disastrous decisions and doesn't show the least sign of regret. Finally, it is my personal prayer to young people, so that they choose, they in fist person, the life they wish, ignoring any pression, from society or family. And so that , in a world that spoils them, pity them and approves of  their "making martyrs of themselves", with an act of  bravery and rebellion, young people get back their freedom to choose whether to study or not, inverting the unbearable commonplace which has ruled  and oppressed us"


I can't totally agree with what she says, not with everything she says. But this well-written book has been read by the majority of my colleagues, has sold hundreds of thousands of copies in few days and could have been written and signed by so many of us. We are really worn out and disappointed and worried. Not simply angry. And it is not a question of money or recognition we do not get, it's a matter of principles. It's to be forced to witness, helplessly,  the total destruction of a home you believed your own, the  burning to ashes of an alive being you really loved. Astonishment, resignation, sorrow. 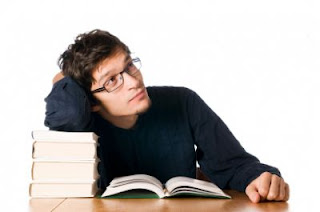 Zero syllables
The students look at me. Attentive, interested. The Iliad fascinates them. They follow me for one hour or two. They are good kids, patient. It is not true that nothing interests them. Nevertheless, with Homer, how can you not be overwhelmed? The gods, the heroes,  poetry and myth ... I'm happy. satisfied. It seems the world works and I have my usefulness. I explain, they listen. Good.
Only that,  after that,  I test them. Oral tests.
What can I do? School is that: the teacher explains, the student studies, the teacher asks questions and does tests, the student asnwers the  questions. There are other things, of course, don't worry: we discuss, joke, talk about so many things. But the core remains this  one: school is based on study. It sounds so normal. That's the way of the (school) world.
So? ( ...)
Shame is, I must test them. You can't imagine how sorry I am, and when it is about Christmas,  even more... But, you know, every student must have marks and evaluation in Italian before the end of term, so,  obviously,  I must test the ones who still haven't got any mark. You understand me, don't you? As a precaution, I even warned them a week in advance:" you are the only four students without any mark, so, obviously,  you'll be  tested soon. Obviously.
Well,  I test them orally. They come near the teacher's desk, slowly, carrying their chairs.
(...)
They didn't study.
The problem is this: they didn't study.
I ask questions and none of them answers. Four students tested, zero syllables. They didn't study. Obvious. If they don't answer a question, it means they don't know. And they don't know because they didn't study. Right? Right.
And I just don't understand why. This is my question. Why didn't they study?
I send them back to their desks with a 4 (out of 10). They failed, then 4. It might have been 2, but I can't do that.  It would be hard to remedy afterwards. However,  4 is  4, there's nothing to laugh at.
(...)
I ask them, I ask the four of them: why didn't you study?
(...)
Zero syllables, again.(...) They are so kind and meek. Meek and dumb. Well-behaved. Quiet. No struggle ever furrows their brains, their voices, their gestures. They don't want to strife, challenge, defy, rebel. Nothing. Maybe,  only from time to time, they are run through by a slight uneasiness, small high clouds which soon pass away.
Sometimes, instead,  - a  miracle! - they answer me.  They say vehemently: But I did study,  prof!
I'm afraid, they are terribly sincere. I'm afraid this means they can't study nor understand whether they studied or not: they think they did it but they don't even barely got the meaning of what to study means.
Another of those questions I mustn't ask comes to my mind: isn't that,  by chance, so far, nobody has asked nor taught them to study?
I feel the urge to caress their heads and tell them: Never mind. Everything's ok, anyway.
But I can't, I'm their Italian  teacher.  I send them back to their desks. With 4 as a mark.
(from p. 23-26)


Dreaming of a different school 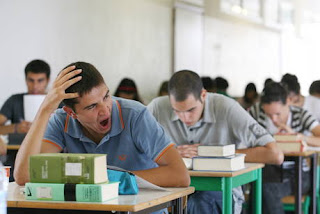 Sad, isn't it? This is a frustrating experience I know so well.  Then, Paola Mastrocola starts analysing how these teenagers live, what their interests and routines are (pomeriggio medio-neutro = avarage neuter afternoon), the death of any sense of shame in them, their going to  (very expensive) private lessons, the difficulty of teaching them the classics because of their incompetence in their mother tongue, the end of words (rather Orwellian, isn't it?), their being a  born- digital generation.
In the second part she proposes a brief history of  "non-study", that is, the struggles and reformations which marked the change in the Italian and European education systems.
In the last utopian part, she dreams of three different kinds of school: a school for work, one for communication and one for studying. She calls them work-school, communication-school, knowledge-school.
She concludes: "So everybody will be able to choose their own type of school, according to what they are and  wish to be, aiming at fullness and happiness". (p.244)
She's tired of feeling herself, her work, her knowledge and role USELESS.
She's sad at watching unhappy teenagers forced to come to school just to show off their new designer's clothes and socialize.
She thinks it is time to let them free not to study.
Do I agree with her? Not completely, as I told you before, but I'm just as tired as she is of teaching people who are almost totally disinterested in what I love. I love teaching but also learning, studying and reading, the classics and art, history and the languages. I meet very few young people who share these interests with me. Can I still  be a good teacher? I dreamt of being one,  when I started. I mean, I dreamt I could convey my passion and fondness to others. I've stopped dreaming at school or about school . I had to wake up and face the reality. The reality this book so ironically and provocatively tells about.
Posted by Maria Grazia at Tuesday, April 05, 2011
Email ThisBlogThis!Share to TwitterShare to FacebookShare to Pinterest
Labels: Books, From my bookshelf, School, Welcome to Italy