WHAT I'VE BEEN WATCHING - AN AWFULLY BIG ADVENTURE (1995) 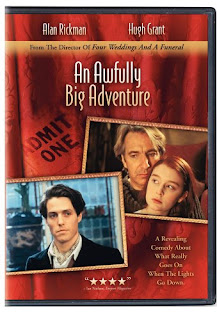 An Awfully Big Adventure is a coming-of-age 1995 drama film about a teenaged girl's experiences with a theatre company in Liverpool. Set in 1947, the film is based on the 1989 novel of the same namel by Beryl Bainbridge.
The reason why I wanted to see this film was its cast: Alan Rickman, Hugh Grant, Peter Firth, Alun Armstrong among others. Only, I thought it was a comedy and didn't expect all the sadness which overwhelmed me in the end. Original and well-acted, I can't deny it, but so extremely sad. More than that... as tragic as an ancient Greek tragedy.
The story  (major spoilers!!!)
In post-WWII Liverpool, England, 16-year-old aspiring actress Stella (Georgina Cates) lives with her uncle (Alun Armstrong) and aunt (Rita Tushingham), after her mother left her with them and disappeared. Something of a dreamer, Stella longs for adventure, which materializes when she becomes an apprentice for a theatre company of aging actors run by eccentric, self-absorbed director Meredith Potter (Hugh Grant). Stella develops a crush on Potter, unaware that he is a homosexual whose flirts include another teenage apprentice, Jeffrey (Alan Cox). Potter does not return Stella's attentions, but something in her  attracts O'Hara (Alan Rickman), a brilliant actor who joins the company to play Captain Hook in  the production of "Peter Pan". 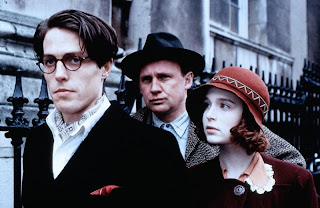 O'Hara behaves with grace and charm publicly but, privately, he is another troubled soul: he is haunted by his wartime experiences, his being a poor provincial actor, and a lost love (who, he believes, bore him a son he never knew). O'Hara and Stella embark on an affair . Stella foolishly views this as a way to lose her virginity and remains emotionally detached, but O'Hara begins to see in her his pre-war girlfriend, and develops an attachment.
Troubled by Stella's emotional preference for the abusive Potter, O'Hara visits her guardians, her  aunt and uncle,  and learns that Stella's missing mother was ... his lost love!  That made Stella - to whom he has been making love - his daughter. A daughter rather than the son he had always imagined.
Keeping his discovery to himself, O'Hara is shocked and  in grief and confusion run to the sea. He appears to make a snap decision to jump a freighter, slips on the wet gangway, hits his head and is pitched into the water, where he drowns. 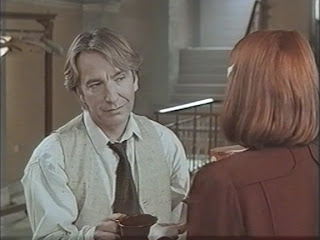 The theatre company learns only that O'Hara has been found drowned (not that his death was accidental), leaving Stella with the impression that he has committed suicide owing to her emotional rejection of him.  Stella hastens to confide her woes over the phone to "her mother" - as has been her habit throughout the film - we are suddenly reminded that the absent Stella Maris had years ago won a nationwide contest to be the voice of the "speaking clock". It is her recorded voice that provides the only response to her daughter's confidences.


Isn't it extremely sad? I usually like moving stories, those which leave you with wet eyes and needing a tissue but... Maybe it was because I didn't expect anything like this that I was so disappointed but I was so depressed,  I needed to watch something much more cheerful after that (bits of Vicar of Dibley, A Handsome Stranger)
P.S. The film's title is a quote from Peter Pan, one of the plays the company is performing, in which Peter declares, "To die will be an awfully big adventure".
Posted by Maria Grazia at Friday, April 01, 2011
Email ThisBlogThis!Share to TwitterShare to FacebookShare to Pinterest
Labels: Costume movies, Movies, My DVD collection

... but I DID tell you it wasn't a comedy, didn't I?
Hope you enjoyed the actors' performances, though :)
Have a lovely w-e everyone,
x K

It sounds wrenching, and even more so since you were expecting a comedy! I actually found this particularly sad: "It is her recorded voice that provides the only response to her daughter's confidences."

I've seen this movie too and not enjoyed it a lot. I'm sure I'm repeating myself now but... the only reason I picked it from the shelf at Blockbuster was Alan Rickman. I'm crazy about him ;)
Ciao, Claudia

Just catching up with more of your postings, MG.:) I saw this movie a long time ago and also read Beryl Bainbridge's novel - I remember admiring both. As a lifelong fan of Hugh Grant, it is nice to see a film where he does a role out of his usual sphere - he actually did quite a few more adventurous roles earlier in his career, before he got typecast in romantic comedies (though I like him in those too.