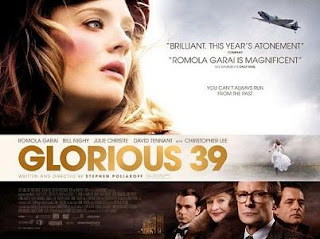 As some of you might remember, I'm fond of WWII movies as well as of films set in older times. I had this 2009 DVD, THE GLORIOUS '39,  there waiting in my TBW list for quite a while. This is not "Schindler's List" nor "La Vita è Bella" nor "Agnes Gray" either. But it was quite an interesting discovery.
It seems this film  bears all the traditional hallmarks of Stephen Poliakoff obsessions: the evocative power of the past, the magic of memory, the mystical bonds of extended family connections, the hidden energies of secrets kept buried for too long, and the shattering consequences of the revelation of truth which has been suppressed. It is weird but original and well acted and, of course, with stunning locations, picturesque castles, hunting grounds, elegant gatherings.
The historical - political context 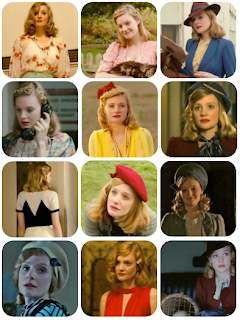 It is a pre-second world war conspiracy thriller set in 1939 in Britain  revealing one of the most terrifying of all the "untold stories" of which the true and secret history of Britain is full . I'm thinking of Poliakoff's approach to the pro-appeasement movement , that is to say , the  supporters of the  foreign policy of British Prime Minister Neville Chamberlain towards Nazi Germany between 1937 and 1939. His policies of avoiding war with Germany have been the subject of intense debate for seventy years among academics, politicians and diplomats. The historians' assessment of Chamberlain has ranged from condemnation for allowing Hitler to grow too strong, to the judgement that he had no alternative and acted in Britain's best interests. At the time, these concessions were widely seen as positive, and the Munich Pact among Germany, Great Britain, France and Italy prompted Chamberlain to announce that he had secured "peace for our time".
The story 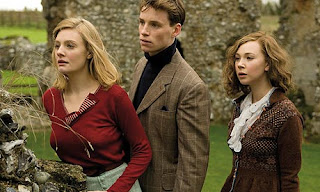 Romola Garai stars as Anne, a young successful actress, the eldest of the three Keyes children; desperate for children, her father, Member of the House of Commons, Alexander (Bill Nighy) and mother, Maud (Jenny Agutter) had adopted her, however, Maud then gave birth to Ralph (Eddie Redmayne) and Celia  (Juno Temple)
In their luxurious, impressive country estate, they talk  war and appeasement, Churchill and Chamberlain. Under the cool, watchful eye of Joseph Balcombe (Jeremy Northam), Foreign Office spoo. One of their friends,  Hector,  a young MP,  (David Tennant) urges action  against Hitler during Sir Keyes' birthday dinner and is  abruptly found dead.

By chance,  Anne finds herself forced to turn into a detective. She starts investigating about the sudden, unexpected suicide of their friend. Nobody else seems to find it strange, unexplicable. She stumbles upon some incriminating recordings, conveniently hidden in the family outhouse, and asks her fellow actor Gilbert (Hugh Bonneville), to listen to them for her. After doing that, he urges her to listen to them and he, too, dies before being able to reveal her what he found out in those recordings. A second unexpected, unbelievable suicide!
The series of tragedies unravelling Anne's comfortable life gets to its apex when she asks her lover Lawerence (Charlie Cox) for help,  revealing him what she has just discovered. She finds him dead too. The really surprising  twist comes in the end, when the story lands back to the present , just where and when it had taken off a couple of hours before. 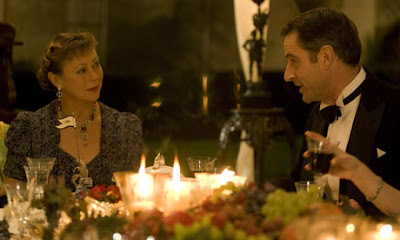 You've certainly noticed the names in the stellar cast , which is one of the main reasons to watch this film. They are all definitely convincing in their roles. Good suspence, symbolical references to the tragedy to come - the scene of the killing and burning of pets -  right pace. Though, at the end of this movie you  may feel as if you've missed something, as if some questions remain confused, unsolved.
Posted by Maria Grazia at Friday, April 15, 2011
Email ThisBlogThis!Share to TwitterShare to FacebookShare to Pinterest
Labels: Costume movies, Movies, My DVD collection, WWII Movies

Great review! I really enjoyed this movie as well (it's been a couple of months since I reviewed it myself). Very thought-provoking film!

This movie sounds really interesting. I've read about it while browsing the web but I was quite disappointed discovering that it hasn't been released in Italy. I hope there will be at least a DVD version, but I'm afraid there won't be.

@Ruth
Off to check your review, then. Thanks for dropping by and leaving your comment. A good weekend to you!
@Claudia
Do you mean in Italian, Claudia? I'm afraid it won't be released in our country. It's already about 2 years old and if it hasn't so far, I fear ... Can't you try the original version? With the help of the subtitles, I'm sure you'll make it. Thanks for your comment. Ciao!

Sounds as if you enjoyed this one a lot more than I did, MG - I thought it was a really bad film in general, although I did like seeing the great cast, especially Romola Garai and David Tennant.

Who moved the baby while Anne was sleeping in the meadow?