My love for costume movies and period drama has brought to me other joys recently. I've finally watched the 2-part adaptation of my favourite Dickens, GREAT EXPECTATIONS and I've happened to watch this relatively recent film,  CHERI , on pay-tv.
1. CHERI (2009) Set in the luxurious demi-monde of pre-First World War Paris, CHÉRI is the story of the love affair between the beautiful retired courtesan Léa (Michelle Pfeiffer) and Fred, nicknamed  Chéri (Rupert Friend, Albert in Young Victoria 2008 and Wickham in Pride and Prejudice 2005), the son of her old colleague and rival, Mme Peloux (Kathy Bates , Misery 1990). 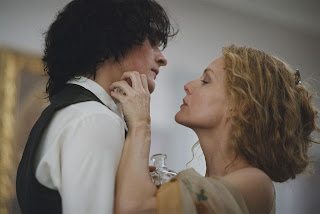 Turning stereotypes upside-down, it is Chéri who wears silk pyjamas and Léa's pearls, and who is the object of gaze. The two believe their relationship is casual until they are separated by Chéri's marriage, with young Edmée (Felicity Jones, Catherine Morland in Northanger Abbey 2007)  at which point they realize they are in deeply and desperately in love. They spend a miserable nine months apart, at which point Chéri appears at Léa's home. They spend the night together and Léa begins to plan their new life together. 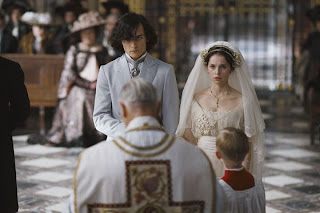 However, when she learns that Chéri had returned for the moral strength to be a husband, she releases him to return home. The final scene shows Chéri leaving Léa's home to walk down the street towards his home. Léa watches him leave, sure that he will turn and come back. When he doesn't, she returns to her vanity table to gaze at herself in the mirror. The narrator cuts in that after many years Chéri will realize that Léa was the only woman he could ever love, but she was too old for him. 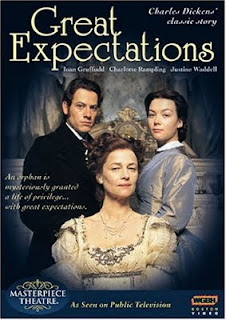 2. GREAT EXPECTATIONS (1999) - Two relatively  young stars team up with a seasoned cast including Charlotte Rampling and Bernard Hill in this  Great Expectations by Charles Dickens.
Welsh actor Ioan Gruffudd (Hornblower, Titanic) stars as Pip, Dickens' hero who goes from rags to riches under the patronage of a secret benefactor. The term "great expectations" refers to prospects of a fabulous inheritance, communicated to Pip by Jaggers, a coldly calculating attorney, on behalf of an unidentified patron. The event transforms Pip from poor orphan, mistreated by his sister and apprenticed to his blacksmith brother-in-law, into a supercilious gentleman-in-training.
The story ranges from the Kent marshes in Southeast England, where Pip grows up and where he encounters Magwitch, a terrifying escaped convict, to bustling, companionable, Dickensian London. Justine Waddell (The Woman in White, Tess of the D'Urbervilles, Wives and Daughters) is Estella, the haughty young woman who beguiles and tantalizes Pip from their tender years into adulthood.
Charlotte Rampling (Farewell My Lovely, The Night Porter) plays Miss Havisham, Estella's deranged guardian, who has hated men ever since her wedding day many years before, when her fiancé failed to show up -- an event she commemorates by living as a recluse in her bridal gown among the decayed ruins of the wedding feast.

Bernard Hill (Titanic) is Magwitch, the convict whom young Pip assists at the start of the story. Dickens fans well know that a desperate character who pops up at the beginning is sure to show up again in a most unexpected context.
Other immortal Dickensian creations spring to life  including Molly, Jaggers' brutish housekeeper; Wemmick, Jaggers' dual-personality clerk; Mrs. Joe, Pip's neurotic and abusive sister; Joe, her husband, the mild-mannered blacksmith; Biddy, their unkempt angelic servant; and Herbert Pocket, Pip's loyal and guileless friend. 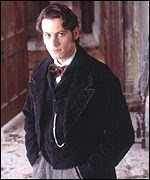 The bizarre and once-beautiful heiress, Miss Havisham, seems to be behind Pip's unexpected legacy. She has mysterious motives possibly connected with a warped match she envisions between Pip and her ward, Estella, whom Miss Havisham has trained to treat all men with contempt.
Although set in the 1800s, producer David Snodin sees the story as being very contemporary: "We've been diligent about getting it historically correct, but what we accentuate is the modernity of the characters. There are people like this in the world today. There are Miss Havishams -- slightly clinically-insane shut-ins who are in deep need of therapy. There are Estellas. There are Magwitches. There are Pips. There are a lot of Pips -- uncertain young men who don't quite know what their lives are about..."
I posted about GREAT EXPECTATIONS, the novel, some time ago. If you want to have a look ... HERE'S MY OLD POST.
Posted by Maria Grazia at Tuesday, September 07, 2010
Email ThisBlogThis!Share to TwitterShare to FacebookShare to Pinterest
Labels: BBC Drama, Costume movies, From Books to Movies

Oh Maria! I LOVED the costuming in Cheri! The whole movie was beautifully done I felt. I like Great Expectations too. Justine Waddell is one of my favorite actresses, I've always found her to be so beautiful. I remember when I first saw her in Tess of the D'Urbervilles, that's really waht got me started on my BBC movies!

Great Expectations is one of my favorite Dickens novels too. I kept my wedding dress explicitly in hopes of wearing it to the supermarket and on other mundane errands as on old woman, like a social Miss Havisham. Some ladies wear purple, but I think a wedding dress very appropriate to celebrate eccentricity in old age. I have never seen this version, but LOVE Justine Waddell. She was also Julia Bertram in Mansfield Park (1999), but I expect you know that. I love you taste in film, Maria!

I love that adaptation of 'Great Expectations' and must watch it again soon - great posting, MG, and I love your choice of stills! I was a bit disappointed by 'Cheri', since I found the characters a bit unconvincing and thought the narration got in the way, but I did love the atmosphere and the costumes, and maybe I would like it more if I saw it again...