Celebrate the 200th Anniversary of Elizabeth Gaskell’s Birth
with a Blog Tour on September 29th, 2010
"He shrank from hearing Margaret's very name mentioned; he, while he blamed her--while he was jealous of her--while he renounced her--he loved her sorely, in spite of himself." Elizabeth Gaskell, North and South 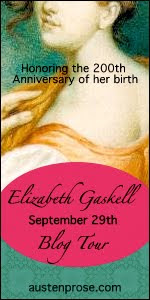 2010 marks the bicentenary of mid-Victorian novelist and short story writer Elizabeth Gaskell’s birth on September 29th, 1810 near London. Best known for her detailed and sensitive portrayals of English social strata, her novels are cherished by literature lovers and social historians for their honest depiction of life of the rich and the poor from the first half of the nineteenth century. Five of her books have also been brought vividly to the screen in television mini-series adaptations: The Brontes of Haworth (1973), Wives and Daughters (1999), North and South (2004), Cranford (2007) and Return to Cranford (2009).
To honor Mrs. Gaskell’s literary achievement, please join me and other fellow Gaskell enthusiasts for a blog tour in celebration of her birthday. Visit any of the participant’s blogs on Wednesday, September 29th, 2010 to read about her life and times, and reviews of books and movie film adaptations. There you will also find a link to take you to the next blog on the tour. Enjoy!
Biography
Elizabeth Gaskell’s life and times: Vic – Jane Austen’s World 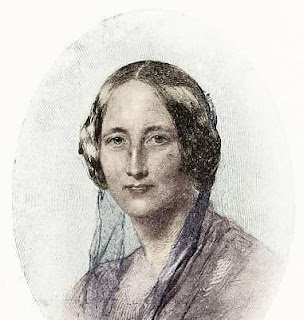 I'm in! Thanks for the heads up. Sounds like great fun!

I've been meaning to review North & South (book and/or miniseries) for several months now, so this is a good incentive to do so! :) I'm in!

So looking forward to your review of N&S--one of the best mini-series ever.

I love Gaskell as well. North and South and Wives and Daughters are two of my absolute all time favorites. I don't know which comes first. It must depend on my mood. The book version North and South ends differently of course from the movie. In a rare case I would say I like the movie with Richard Armitage better. The most romantic ending ever!

Oh, I'm so pleased to see this -- brilliant idea!

I love Elizabeth Gaskell, and when I won Cousin Phillis on a Fly High giveaway I almost thought it was a sign of destiny :D

I really hope that such a great author will be more appreciated in Italy soon and... if there's any publishing house listening... could you please start translating North and South?

I'm writing my N&S (TV) review at the mo and will schedule it for the day, just so that I don't miss it by completely forgetting! (It happens!)

But reading the comments here, Claudia just gave me an idea. I tried seeing if there was a Swedish translation of N&S, but there doesn't seem to be one. Elizabeth Gaskell seems to be very thinly translated into Swedish, and I had never heard of her before I moved to England. Seeing as how the book's public domain and all, I'm thinking it would actually not be a bad idea to sit down and translate the darn thing myself, so that more people can read it! :) A bit overly ambitious perhaps but there you go.

(Let's just say the "easily over-excited" bit in my blog's tagline isn't just there for the sake of it ... I tend to get carried away far too easily.)

When do we start? and could you please give me more detailed info. I've never entered any competition of this kind before. Thanks, Cla

Snce N&S inspired me to write fiction in 2004, thereby literally changing my life, Mrs Gaskell will always have a special place in my heart.

How lovely to celebrate her anniversary!

I would love to win the audiobook. I wish they would come out with an unabridged audiobook narrated by Richard Armitage!