LIFE WAS TOO SMALL TO CONTAIN HER 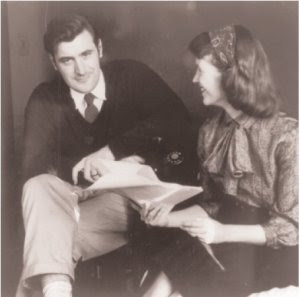 She was American, he was English. Both very sensitive, both very good poets. But he was lucky, he was a man in the 50s. She, instead, was stuck, entrapped, in the cliché of the female role of the 50s- well it was STILL the long-lasting stereotype inherited from very ancient times. He was a heartthrob, she felt like "a horse in a world without race-tracks". Sylvia Plath, Ted Hughes. Two of the greatest poets of the 20th century. The two met at a party in Cambridge in 1956 and got married in the same year. They had two children, Freida and Nicholas. However she was unsatisfied with her life, she desperately wanted to find time for her poetry but her house and her children sucked all her time and her energies. Her life turned into hell one night when she lifted the receiver and overheard a conversation between her husband and his lover, a common acquaintance, Assia. Her turbulent marriage wrecked though their bond of love remained unbreakable. 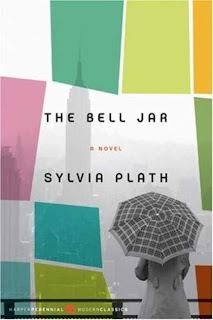 Sylvia had suffered from depression as a teenager and had even tried to kill herself at 19. She was rescued and treated with electro-shock therapy. A terrible period of her life she wrote about in THE BELL JAR, her splendid, deeply touching autobiographical novel. Her fascination to death ( "blackness and silence") became her favourite subject in her poetry, nearly an obsession, and grew on and on till she decided to try again: she gassed herself, she succeded in committing suicide, on the 11 of February 1963. She was 30. In that last troubled year, she wrote her most beautiful lines, Ted Hughes would later on published.
Sylvia Plath is one of my favourite poets but also a woman whose life has always fascinated me since I first read THE BELL JAR, her only novel. Her poetry, known as confessional poetry, is terribly dark, tragic but so...deeply touching. Here are some lines from "The Moon and the Yew Tree" (Ariel):
This is the light of the mind, cold and planetary.
The trees of the mind are black. The light is blue.
The grasses unload their griefs on my feet as if I were God,
Prickling my ankles and murmuring of their humility.
Fumy, spirituous mists inhabit this place
Separated from my house by a row of headstones.
I simply cannot see where there is to get to. (...)

This is instead the letter Ted Hughes wrote to Sylvia's mother after some time from her suicide. Can you imagine his sense of guilt? How difficult could it be to write such a letter? It's extremely moving... LISTEN TO IT. HERE.
(Has any of you recognised the voice reading the letters? Who guesses will win ... MY CONGRATULATIONS!)
In 2003 Christine Jeffs directed an amazingly powerful beautiful film starring Gwyneth Paltrow and Daniel Craig, SYLVIA (in my DVD collection). I know very few people must have seen it but it is a terribly good portray of the two lovers and poets. Critically acclaimed and very moving, it is a must-see movie.

Hi MG, The movie is suberb but I cried so much that I couldn't possible watch it again! I love Gwyneth Paltrow as Sylvia. She's perfect for the role! Sylvia's life was very tragic indeed but she left us beautiful poems and will be remembered forever. Have a nice weekend. Ciao. A.

hehehe RA! I have that full radio program and love it. SOme of the pieces he reads with such feeling it will almost make you cry. I have the last line of "Song" painted on the wall is silver above my bed "My head, worn out with love, at rest." so beautiful! I actually want to see sylvia because I heard that Sam Troughton (Much from Robin Hood) is in it.BTW, I added your link to my "Favorite Blogs" list at the top of my blog a couple weeks ago!

@lunarossa
Ciao, A! Yes, I cry every time, but I love this movie , Sylvia's poetry and her beautiful novel. I also read her diaries and letters, but I've recently discovered Ted Hughes's letters. They close the circle but ...Do you know even Assia, who took Sylvia's place in Ted's life, committed suicide? What kind of monster was that man? How could he go on living with those deaths on his conscience?

@Jenny Kerr
You've guessed so ... you win.... MY CONGRATULATIONS! But I bet you'd guess and I won, so I win ... a great nice BLOG MATE!
Good night, Jenny! For me it's time to sleep. A very good evening to you!
TOMORROW IS SATURDAY. Are you ready for ep. 12?

I didn't study literature at school and it was only when I was working with some fantastic teachers at the Liceo here in Ravenna that I began to get interested in it and learn something. I teach in Scuola Professionale now (which I love) but I miss the literature side of things - your blog is fantastic - I love the way talk about the writers, the characters etc - you must be a great teacher to have and to work with.

I enjoyed this post so much, Maria Grazia! And Ted Hughes' letter made me cry, but then I read that his lover committed suicide too! How awful!

Ciao and have a wonderful weekend!

@Kathryn
As usual, you're always very kind. So you are a teacher, too! This is something I missed. Conversazione? I have a very nice native speaker colleague who sometimes gives extra-curricular English lessons to my students. She's from Cambridge but has been living in Italy for 25 years now. I teach to Liceo students and I'm lucky because I love teaching literature. Much more than language and grammar, but I have to do that, too. Grazie e ciao!
@Elvira
It's unbelievable, yes, also Assia committed suicide. But that letter is incredibly moving. It makes me shiver when I listen to it.
Thanks a lot and take care. Besos.