JOHN KEATS : ONE WHOSE NAME WAS WRIT IN WATER 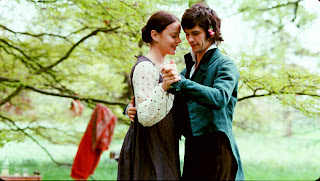 Among the films taking part in this year Cannes Festival there was also Jane Campion’s BRIGHT STAR. Do you remember her? She's the director from New Zealand who won the Palme D’Or in 1993 with her wonderful THE PIANO. As I heard about it, I promised myself this film will be part of my DVD collection as soon as it will be released (with YOUNG VICTORIA, another costume film released this year, which I’m eagerly waiting to see).
The movie tells the story of the tragic romance between JOHN KEATS, one othe English Romantic poets of the second generation, and Fanny Brawne. Keats has now become one of the most popular poets in the English language, but in his life, though he managed to publish his works, he wasn't either famous or rich. 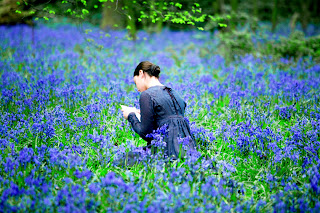 Keats, played by Ben Whishaw, met Fanny, Abbie Cornish in the movie, at his friend Charles Brown’s house in 1818 and soon fell in love with her. She was 18 and he was 23. He had already lost his mother for tuberculosis and his brother Tom would soon follow her, just when John himself started showing the first symptoms of the terrible desease.
The screenplay is based on the letters that the poet wrote to his beloved, letters which were published only after Fanny’s death.
Keats had abandoned his studies in Medicine to dedicate his life to poetry but could hardly live on it.So Fanny’s mother, at the beginning, didn’t approve him as her daughter’s wooer. Despite his health troubles, Keats was a cheerful person, full of life, and with the passing of time Fanny started to return his love. The two lovers got engaged, but their happiness was definitely short. In February 1820, on a cold evening, Keats got back home feverish and started coughing blood, an undeniable sign of his next end.

After a while, sure of his approaching death, he wrote to Fanny suggesting to break their engagement but she firmly refused and he couldn’t hide his relief. After seeing his terrible health conditions, Fanny’s mother hosted him in their house where he lived for three months. But his doctor and his friends stirred him to go to Italy where the mild climate might have helped improve his health.
He had seen his mother and his brother die for that illness and, maybe, he didn’t want to give Fanny the same terrible sorrow he had suffered, so he accepted the proposal of leaving England for Italy. She gave him the paper to write to her and a marble oval, used at that time to cool high temperature. He left with his friend, painter John Severn, but he was quarantined for several days at Naples port so when he finally arrived in Rome his health was seriously compromised. He lived at “La Casina Rossa”, next to the Spanish Steps at Piazza di Spagna for about 3 months, dying there on the 23rd of February 1821, at 25. He never wrote to Fanny nor read her letters but wanted them to be buried with him with a curl of her hair. On his grave, at Testaccio Protestant Cemetery in Rome, no name nor date were written, just these words: “Here lies one whose name was writ in water”. From the letters Fanny later wrote to her sister, we know she remained deeply in love with the poet. She accepted to get married only after 9 years from his death and had three children. She kept Keats’s letters till her death - secretly from her husband.

The title of the movie is taken from one of Keats’s poems, a sonnet, dedicated to Fanny:

Bright star! would I were steadfast as thou art—

Not in lone splendour hung aloft the night,

And watching, with eternal lids apart,

The moving waters at their priestlike task

Or gazing on the new soft fallen mask

Of snow upon the mountains and the moors—

To feel for ever its soft fall and swell,

Awake for ever in a sweet unrest,

And so live ever—or else swoon to death.

Thanks for the info. I didn't know about this film. Sounds interesting. Better keep an eye on the cineam releases. I bet this ends up in arts houses and not in big cinemas! Ciao. A.

@lunarossa
I'm sure of that, at least here, in Italy. This is why I wrote it'll be in my DVD collection as soon as it comes out. No hope to see this film at the cinema. But ... let's hope...Who knows? It hasn't been released so far.
Take care, A.

Looks like I'll have to wait a few more months for this film - according to the imdb it won't be out in the UK until November. I do wonder if it will make it to my town at all, but am eagerly looking forward to it, anyway. All the clips I've seen look wonderful, as does the trailer you have posted here, Maria. Judy