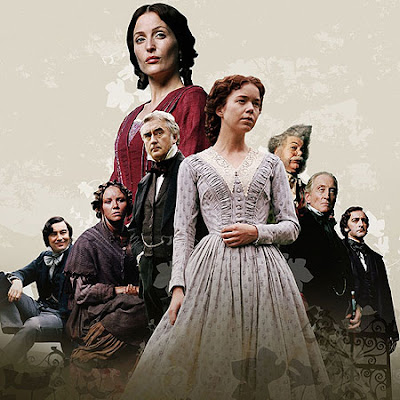 In my Senecan attempt not to waste my time ("Life, if well lived, is long enough"), I usually watch my favourite movies and DVDs while ... ironing. Due to the fact I live with three sports boys (husband and sons), I have got a huge pile of clothes to be ironed at the end of the week. So I've transformed this time consuming - but boring - house activity in an occasion to improve my English (since I try to watch movies and TV series in the original version) and to entertain myself. 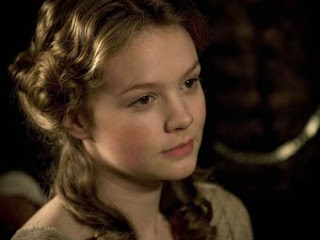 While sweating on my husband's shirts and trousers or my sons T-shirts and jeans, I've recently re-watched BLEAK HOUSE (BBC 2005). I had already seen it as soon as I got the DVDs from Amazon UK, but it is such a complex but exciting mystery story I wanted to see it once more.
The 15-episode series is based on Charles Dickens's mature novel published in 19-20 instalments between 1852-53. His long, well-narrated, exciting stories published in monthly journals substituted , in the Victorian Age, our modern TV drama and made Dickens widely-popular and extremely rich. London theatres were crowded of enthusiastic readers who paid to see and listen to Dickens reading his novels on stage. He was a VIP in the 40s and 50s of the 19th century. 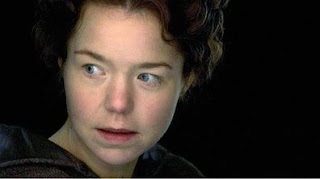 This is - very briefly - the story you find in the book and in the TV series. Bleak House is a mystery story in which its heroine Esther Summerson, discovers the truth about her birth. She is brought up as an orphan by her aunt whom she believes to be her godmother; Mr John Jarndyce, the middle-aged hero of the novel, becomes her guardian and pays for her education. Once she's grown up Mr Jarndyce brings her to his home, Bleak House, as a companion to Ada Clare, his ward and one of the heirs and heiress to the Jarndyces' will.
There are lots of characters and sub-plots in this complicated novel which make it so gripping. But, since it deserves to be read - if you love reading, there are more than 1,000 pages waiting for you - or at least to be watched as a TV series, I don't want to give you too many spoilers. Well, just a hint more...The question of whom Esther will marry contributes to the plot interest and her illness (smallpox) which leaves her face disfigured - but her moral beauty unimpaired - provides one of the story's dramatic and sentimental crises. I MUST STOP NOW, otherwise I'm going to tell you too much!

Now I'll leave you with a nice video made up of the several proposals Esther Summerson receives by different wooers: a funny clerk, Mr Guppy, generous mature Mr John Jarndyce and charming Dr Allan Woodcourt. If you see it till the end, you'll find out who the winner is. Do you agree with Esther's choice?

Warning: Of course, there are spoilers in this video.

CHARLES DICKENS on LEARN ON LINE

AN ANIMATED BIOGRAPHY OF CHARLES DICKENS

Bleak House is such a great story! I've recently re-watched it and I just wish we could see something of this kind on Italian TV...

@Marianna
I really hope so. I love good costume drama. But they are more worried about the watching figures (auditel) they get than about the quality of their programmes. Ergo...let's go on hoping and buying DVDs!
Best wishes, Marianna.

Strangely enough I too followed the episodes of Bleak House ironing my husband's and kis' clothes! Although the series is rather bleak and dark I really enjoyed. I haven't read Dicken's book but my husband said the script was rather faithful to the original. Do you get the dvds via amazon or can you find them in Italy as well? Pls tell me if you need something (books or dvds or else) that you cannot find easily there so i can get them for you. All the best. Ciao. A.

@lunarossa
Well, A. it seems we are discovering day by day that we share much. It's good to find sympathetic friends. As for getting DVDs and books, I usually buy them on line at Amazon co.UK. It's very easy and fast and I can find anything I want. But THANK YOU for your kind offer. I'll think about it when I can't find something.

While I loved Bleak House for the acting, dialogue, cinematography, music, and being an Andrew Davies costume drama (which I suppose encompasses most of these), I think it has a real problem structurally. For me, the emotional climax of the book is the revelation of Lady Deadlock's secret to Esther - which comes in the middle of the film. The film supposedly builds to the climax of the court case, but since that really seems like it comes from nowhere at the last minute (deus ex machina writ large, not that I mind deus ex machina when it works, but I don't think it does here) it doesn't pack an emotional punch that comes from a slow buildup of tension.

I think Little Dorrit, the novel and the recent BBC series, got the structural issues much better resolved. The story has a wonderful structure in which the plots come two two distinct climaxes - once in the middle, and then once at the end, similar to Bleak House - but in the case of the final climax, all the plots come together in a orderly, logical way, so that the tension building up in each one contributes to the sense of satisfaction at the end.

Thanks for the lovely review! Have you gotten a chance to get the special edition of Bleak House - or is that not available where you are? I really enjoy the interviews with Denis Lawson, Gillian Anderson, and Charles Dance, not the mention the three funny commentaries by Davies and the directors.

You sound a real expert! Thanks for your contribution. Yes, I love the extras in my DVD set. I love extras in general. They usually help us to get more of the effort behind the result.

My most favourite of dickens, a wlole word. Esther is so modest unselfish being and grateful with the little that she has. So good and honest friend also for aida and richard and she knows to protect herself from villains with a delicate sense. And Allan what a man, what a man! He loves deeply esther for her beautiful soul. We don't have the physical apperance of esther, at book at least..

one question, the old bleak House from bbc was so good;
Marian