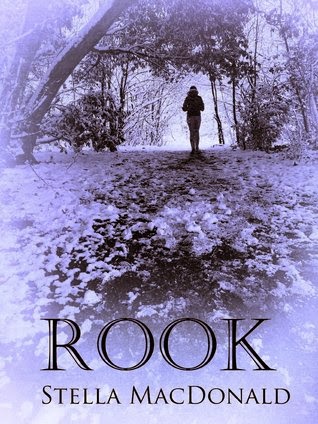 Hello and welcome to my corner of the blogosphere, Stella.  Congratulations on your amazing book, Rook, and thanks for accepting to answer my questions. Since I used to dream of becoming a writer myself, my first  one will be: Have you always wanted to become a writer? When did you start writing?

Yes and no.  I always wrote, but never planned to be a writer.  It seemed to big, too hard.  I thought I should do more traditional jobs, like be a doctor or something – even went pre-med for awhile.  But, ultimately, writing keeps me sane, and I love it, so that’s what I’m going to do.

What did you like to read as a child or a teenager?

I loved Christopher Pike, and moved on pretty young to Dean Koontz.  I read grown up books for a long time before returning to YA.

What do you like most of being a writer?

Most of the time you don’t get to control anything major about your life.  Add to that being so busy that you don’t have a chance to really discover yourself.  Writing, I get to pick everything that happens to everyone, as well as the reasons why. When I wax the most philosophical, it doesn’t take long before I realize I’m really just talking about myself.  I learn tons about myself that way.

Is fantasy also your favourite genre as a reader?

It’s a pretty even toss up between fantasy and dystopian.  I read Hunger Games so many times.  My current favorite book is Mind Games by Kirstein White.

What is the indispensabile element for a successful mystery/fantasy tale in your opinion?

That you’re an honest writer!  If you don’t understand something and then try to write about it, it just isn’t going to work. That’s true even when you’re talking about sci-fi that isn’t even invented.  If you want to write about something, you’d better have it invented all the way in your head before you even get started putting words on paper.

What is the appeal of “the uncanny” to a 21st century reader, especially a YA?

I feel like we live in a world that has gobs of technology, and so much learning, but we still don’t understand such a huge part of what’s out there.  That mystery, knowing the unknowable, that’s something that will always be a draw to a lot of people.

What are the 3 books that you  would take with you to a desert island?

You didn’t say three series… boo!  I’d have to have some Harry Potter, I guess.  Now if you changed it to three series, it’d be all the Harry Potters, all the Hunger Games, and maybe one of those Dean Koontz from my childhood.

Well, that means you’d be lucky enough to travel with a very large suitcase! But you’ve got my sympathy.  Like you I’d love to take my favourite series with me. Now, among the creatures we find in fantasy novels (vampires, angels, fairies, demons, werewolves,etc. ) what would you like to be and why?

Probably a werewolf.  Most of those first four are cold, uncaring creatures that walk around with an agenda.  But werewolves are just big dogs, and we all know that dogs are the best.  Yes… werewolves might eat you, but I think they may just be misunderstood.

What do you like doing when you are not writing?

I’m a mom – that’s what I’m doing.  My kids are some of my very best friends. We do lots of outdoors stuff – hiking, camping, that sort of thing.  Love having kids, and just hanging out with my family.  It puts a whole new spin on the idea of “best friends for life.”

How would you present your book in a tweet?  (140 characters max.)

Man… blurbs are so hard!

Two women, seperated by decades share the same dark secret.  This secret is the key to both their survival, yet only one may learn from the other in order to stop a dark being from taking her over.

That is all, Stella. Thank you very much indeed for taking the time to answer my questions and for being such  a nice and kind guest.  Best wishes for everything! 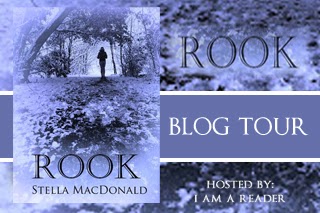 About the book - Rook


Could you be the monster to save who you love? Two women, separated by generations, must leave what they know to start a new life. Seventeen-year-old Kate's senior year is ruined when she's moved from the only home she's ever known. After an isolating month alone in her apartment, school starts, but neither her classmates nor her teacher are who they seem. Kali, a single mother living in the nineteenth century wilds of Montana, is stalked by a malicious past. She fights to keep her daughter safe while her freedom is threatened by her less than benevolent benefactor. Both find love, and with it hope, but that is quickly ripped away as one woman must learn the lessons of the other -- before it's too late to save either.

"This book also drew me in. I couldn't let go of what was happening and when life intervened and forced me to close my computer I kept looking for a few moments to sit down and read some more.” Brookeworm, a Blog 4 Stars

"Rook had me hooked from the first page. It all started so mysteriously that I just had to know what it was all about. “ Jannat Bhat, Obsessive Compulsive Reader 4 Stars

“Rook is an amazing story that had me at the edge of my seat.” Tee Loves Kyle Jacobson Blog, 5 Stars

Is that him? Is he back? My legs jerked, kicking and twitching me around to face the sound. I managed to roll slightly, knocking against a soft, solid object at my feet. It grunted weakly, and immediately I recoiled as though I had been bitten. Squinting, I stared, willing my eyes to find light in the dark, but there was nothing. The sound of the runner drew closer, as if they would trample me any moment. A dim, swaying light appeared through the trees, burning away the inky edges of the deep shadows. When light and sound were almost upon me, branches above me snapped, spraying me in a shower of dried pine needles and snow.

About the author - Stella Mac Donald

Stella is a married graduate student with three boys. Utah is home right now, but the need to wander has extended beyond the fantasy world of writing and into real life. She's lived all around the US and even into the Middle East. The world is really a small place, only made bigger through imagination.


Giveaway was organized by Kathy from I Am A Reader, Not A Writer and sponsored by the author.
a Rafflecopter giveaway
Posted by Maria Grazia at Wednesday, January 08, 2014
Email ThisBlogThis!Share to TwitterShare to FacebookShare to Pinterest
Labels: authors, blog tour, Blog Tours, Books, ebooks, Giveaway, Interviews, rook, YA fiction

sounds like a good read for a very cold winter evening

I know many places in the states would not request this weather request but where we are currently stationed its unseasonly warm so I would like it to be Winter for a week or so :-)

This sounds like a really interest book! I am currently reading Orange is the New Black by Piper Kerman. It is enjoyable, but I actually like the television show based on the book better!

Thanks for the giveaway. :-)

I love to read and im glad i have books in this crazy cold weather ;)