WHY EARLS FALL IN LOVE - INTERVIEW WITH AUTHOR MANDA COLLINS 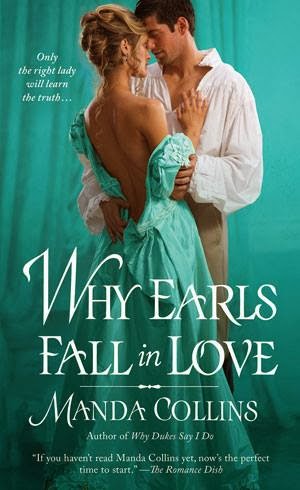 Hello and welcome at FLY HIGH,  Manda. It’s a great pleasure to have the chance to present you and your new spellbinding novel,   “Why Earls Fall in Love” to my readers, since they are always so interested in historical fiction!  Could you tell us something about your heroine,  Georgina?

Georgina Mowbray is the daughter of an Army officer. She’s also the widow of an Army officer. As such, she has been used to living a very structured lifestyle. And she is very firmly ensconced in the middle class. But, when she becomes friends with Isabella and Perdita—both wealthy aristocrats—she is thrust into the world of the ton. She still, however, must earn a living, so at the beginning of the book we see her in her new position as companion to the wealthy Lady Russell. Who just so happens to be the aunt of our hero—Dominic, Earl of Coniston.
Georgie is disciplined, level-headed, and above all resilient. She will bounce back no matter what befalls her.

Is she inspired to any other literary heroine you admire?

Not any one heroine in particular, no. But while I was writing, I kept thinking of her as being very similar to the real-life character of Florence Nightingale, who was also very disciplined and resilent. Though she had a very unhappy love life,  and I was happy to be able to improve on that.

Now Manda, tell us something about yourself and your passion for historical romance.  What age do you prefer to set your novels in?

In my real life (though I suppose writing IS real) I am a librarian, so I am surrounded by books no matter what I’m doing. I’ve loved historical romance since I was in my early teens, and I discovered romance around the same time I discovered Jane Austen. So, naturally I prefer to set my books during the English Regency period. After so many years spent there in books, it feels like home.


What were the most exciting aspects of that age you discovered while researching?

There are so many fun things about the Regency. Most particularly I enjoy the real life characters, like Beau Brummell, and the Prince Regent, and the writers of the period like the poet Felicia Hemans. It was a great time for the arts. And there was so much upheaval politically and culturally. It was just very exciting for everyone.

How difficult was life for a woman at that time?

As with any time, really, the Regency was difficult for women. Once married, a woman became her husband’s property and unless her interests were looked after during the marriage settlements, everything she owned became her husband’s. It’s why so many fortune hunters were keen on marrying heiresses.  And childbirth was extremely dangerous—which is why those sweet epilogues with her hero and heroine cooing over their healthy baby are so wonderful. It’s one of the things we writers can fix with fiction.
Women couldn’t vote or hold political office, women could be quite influential politically. And in the arts. Of course it helped if she had money. But that’s true of anything for men or women.

What is the most important ingredient in your book? Mystery? Romance? Adventure?

If you could be one of the characters in your book, who would you like to be? Why?

I wouldn’t like to be any of the characters in my books. Isn’t that terrible? But really, I’m very happy to live in the 21st century!

Who did you have in mind while depicting your male hero,   Dominic, the Earl of Coniston? Do you have any muse?

Wow! And what is the most intriguing side of writing historical fiction? And what is instead the hardest aspect?

I love being able to lose myself in another world, where I can make believe I’m falling in love and solving mysteries and in general having a drand adventure. Romances take place during the most exciting time in our hero and heroines lives. And I get to live that vicariously every time I write (or read) a book!
The hardest part is making myself sit down to write.

What do you think of historical accuracy in this kind of fiction?

I think historical accuracy is important. But it’s not everything. I don’t think readers would want to read an entirely historically accurate book complete with misogyny and lice and all. (At least this reader doesn’t.) But I do think historical verisimilitude, or feel is important. So I might not sweat a small detail so long as the scene feels as if it could have happened that way.

When you are not writing,what do you like doing?

I like reading, watching television, playing with my dog, waiting on my cats, spending time with my family and friends.

What are you up to at present or in the next future?

I’m working on editing the third book in the Wicked Widows series, WHY LORDS LOSE THEIR HEARTS, which will feature Perdita, the young dowager Duchess of Ormond, as its heroine.

IS IT A REASON FOR ROMANCE?
In Why Earls Fall in Love by Manda Collins, young widowed Georgina Mowbray is settling into her role as Lady Russell’s companion quite well—until the lady’s nephew Dominic, the Earl of Coniston, arrives in Bath for a visit. Georgie’s always found him shallow and too smooth, and trusts him as much as she trusts most men…which is to say, not at all. But Con turns out to be more intriguing than she remembers—and completely irresistible...
OR A PROMISE OF PASSION?
Pretty, practical Georgie is nothing like the women Con usually woos—especially since she seems blind to his charms. But his elderly aunt is so fond of her that Con is determined at least to be sociable…with the occasional flirtation thrown in just for fun. But things take a serious turn when a dangerous figure from Georgie’s unhappy past appears and threatens to bring her harm. Con will do whatever it takes to keep Georgie safe. And if he can show her that all men are not menaces, he might be able to keep her in his arms and never let go…

Manda Collins spent her teen years wishing she’d been born a couple of centuries earlier, preferably in the English countryside. Time travel being what it is, she resigned herself to life with electricity and indoor plumbing, and read lots of books. An affinity for books led to a graduate degree in English, followed by another in Librarianship. By day, she works as an academic librarian at a small liberal arts college, where she teaches college students how to navigate the tangled world of academic research. A native of coastal Alabama, Manda lives in the house her mother grew up in with three cats, sometimes a dog, sometimes her sister, and more books than strictly necessary.

"Why Earls Fall In Love" at Amazon.com

I wouldn’t like to be any of the characters in my books. Isn’t that terrible? But really, I’m very happy to live in the 21st century!

Yay for honesty! I agree... the Regency is an interesting era, but I need my indoor plumbing, modern medicine, and legal rights as a woman.

I don’t think readers would want to read an entirely historically accurate book complete with misogyny and lice and all.

Thanks, June! I definitely appreciate my modern conveniences:)

love historical romance, but I also love my modern conveniences