MUCH ADO ABOUT ... MY WEEKEND 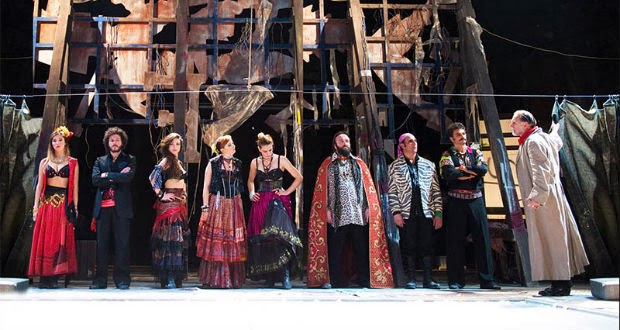 It's been long since I last did so many different things in only one weekend!  But this weekend has truly been pretty busy and special.

On Saturday morning I was at school. What's so special for a teacher? Nothing but it is unusual for me, since Saturday is my day off. I had to be there since I was involved in a project and had to take part in two different meetings with two groups of our students to whom I  presented our "Project Anita B."  for the celebration of the International Holocaust Memorial Day (27th January). I'll tell you more about this possibly tomorrow. 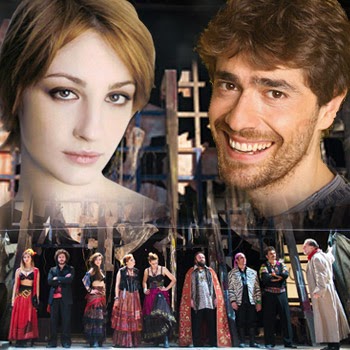 On Saturday afternoon, instead, soon after lunch, I left for Rome with one of my classes and some other colleagues with their students to go to the theatre. As usual,  when we study Shakespeare and the Elizabethan theatre, we pick up one of the many Shakespearian shows that are on in the capital and organize a school trip to see it.
There are always so many good ones! This time we chose a new adaptation of "Tanto rumore per nulla" (Much Ado about Nothing) by director Giancarlo Sepe at Teatro Eliseo. It was not my first, of course, but it was fun and well acted. My best favourite version of Much Ado remains Kenneth Branagh's movie, my second best favourite the stage version I saw at The Globe at Villa Borghese (Rome) in 2010 (my review), and my third best favourite is the modernization I bought and saw on Digital Theatre, the one starring David Tennant and Katherine Tate as Benedick and  Beatrice (see my post). Anyhow, I enjoyed the play also this time and I got the impression my students did too. Their comments sounded so entusiastic once out of the theatre ... especially commenting the gorgeousness of the young
protagonists: Francesca Inaudi as Beatrice  and Giovanni Scifoni as Benedetto. They also loved Claudio very much and Orsola, a minor character. Oh, teens! When they stop being  dismissive or shallow,  their enthusiasm can be contagious. They even asked me to add a question to the test I'm preparing about the play: what did you like the most seeing Much Ado on stage? (they meant  "who",  actually ). They say they've got a lot to write about. They didn't ask me not to do any test? Strange indeed! Jokes apart, they all clapped and cheered at the end of the play and were all smiles once we met outside, hence...they must have liked it.
As for me, let's say that Sepe's gipsy version of this popular comedy conveys even more colour and rhythm to Shakespeare's brilliant love romp, without depriving it of its language richness and variety of registers.
Dialect and folklore add a sparkling tone to the classic comedic devices. Gipsy music and dances accompany all the twists and turns of the unforgettable love stories between Claudio and Hero, Benedick and Beatrice. My final assessement is : Very well done, cast and director!

I said good-bye and wished my students a happy Saturday night once outside,  they went back home with all my other colleagues since I had planned to stay on in Rome to keep a promise to friends: I have known them for years but I have never listened to them sing on an official occasion. So after leaving the theatre, I walked to Via del Corso as far as the beautiful baroque church of St. Ignazio de Loyola. It was rather cold, let's say freezing,  even inside the beautifully frescoed huge church, but once the music started, I forgot everything: Perosi, da Palestrina, de Victoria, Handel, Bach, Mozart, Mendlssohn, Verdi  brought back so many memories of my own past as a singer in a choir (a different one), singing in concerts like that with my mates, enjoying great polyphony, travelling the world and ... being so much younger!  While sitting there in the audience, carefully listening to the "Coro dell'Accademia Filarmonica Romana", I realized I could still sing most of those mottettos in my mind, I remembered them note by note, and ... I enjoyed the concert and the memories very much.
Their conductor is actually the soul of the ensemble. Impossible not to be involved by Monsignor Pablo Colino's joie de vivre, by his geniality and his passion for music. The concert was especially meant as a celebration of his 80th birthday. Yes, he is 80 years old. Or as he likes to say, 4 times 20! And I am a witness of that, I can swear it, he has the energy of 4 20-year-old men! He made his show, music apart. It was such a pleasant experience to see him conduct and present!

Today is Sunday and as usual I must cope with my huge weekly pile. Luckily, ironing has always been for me also the moment of catching up with series and movies I love and can't see during the week. 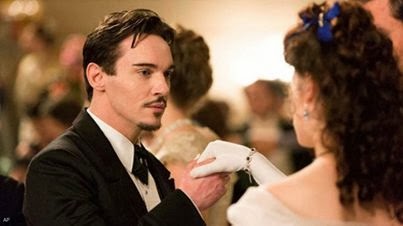 -So...  the incredible finale of Dracula season 1  - Did you miss it? I'd start looking for it,  if I were you. I loved it and I'm looking forward to season 2. Because there must be one! Who dares challenge Mr Grayson and my own disappointment? 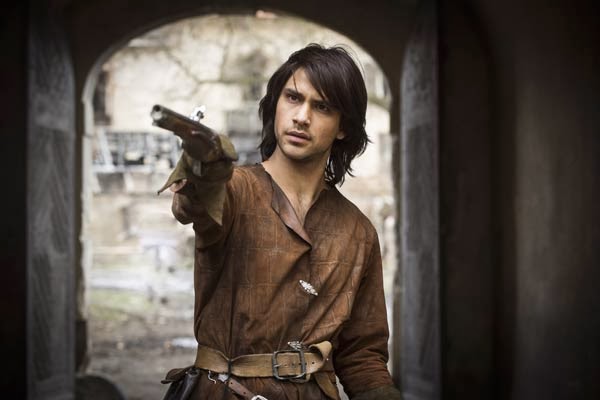 - Then... nice to meet you Luke (Luca) Pasqualino.  Your D'Artagnan is someone I can really like and  even forgive for his dangerous, roguish charm. I didn't expect to like BBC One's The Musketeers that much! 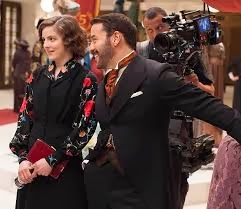 -  And also ... welcome back Mr Selfridge and lovely Miss Towler! Looking forward to tonight's episode 2!
Posted by Maria Grazia at Monday, January 27, 2014
Email ThisBlogThis!Share to TwitterShare to FacebookShare to Pinterest
Labels: About me, At the theatre, Costume drama, Dracula, Mr Selfridge, Much Ado About Nothing, Music, Period Drama, Rome, Shakespeare, The Musketeers

It would be so tempting to sing along with the choir - quietly, of course. If you had time, would you sing again in a choir, or do you just sing to yourself at home? All those live harmonies would be tempting.

Hi June. I sang for so many years! I was in a choir at primary school, then I joined a more important one at 14 and started taking opera singing lessons. Those experiences are unforgettable but I had to stop when my life got... complicated with my quite engaging job + little children. So I still love singing, though my voice is not as trained as it used to be, though teaching has contributed to spoii it, and I do sing (hum?) but when nobody else is around.