SPOTLIGHT ON ... CURSE OF PASSION BY MELISSA BOURBON RAMIREZ + GIVEAWAY 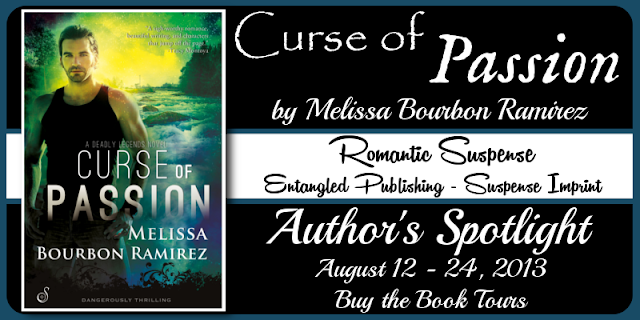 Let's read from the book

Johanna paced and turned toward him, but still hadn’t noticed Ray in the doorway. He catalogued her features. She was thirty-two, with honey-colored skin, cheekbones that gave her an exotic look, long, dark hair…

As it often did, his gaze hitched at her full, red lips. He couldn’t remember the last time he’d kissed lips like that. Maybe never.
The sliver of skin showing between her sweater and her pants drew his eyes. She looked far hotter than any teacher had a right to—certainly hotter than any teacher he’d ever had. Thank God, or he’d never have graduated.
He felt his eyes pinch and blinked hard to break the drugged feeling that suddenly slid over him. He’d done his best to steer clear of her for years, and after this conversation, he’d go back to staying away. 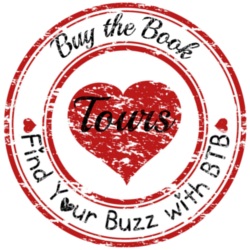 “Who is this? What do you want?” Johanna’s voice held fear, tinged with anger.
That was not a tone Ray associated with Johanna. He froze in place. He’d been trained well by the Army. Freeze first. Assess. Decide. Then move.
She spoke again, her voice rising in pitch. “Would you just stop calling?” she demanded, her voice shaking.
Distressed. Johanna was distressed. Time to act. Ray moved then, coming into the classroom, bumping a desk as he came toward her, startling her.
She whipped around, gasping as she saw him. Her face paled, and a second later she dropped her cell phone on her desk. She speared her hand through her hair, her fingers bending until they looked like claws digging into her scalp.
His heart pumped hard. What the hell? “Johanna,” he said, aware his voice was gruffer than he’d intended. “What was that about?”
She stared at him, her eyes wide, like a damn deer caught in the headlights. One second. Two seconds. Three seconds.
“Prank caller,” she finally said, snapping out of her trance.
Ray ran the pads of his fingers over his goatee. Prank caller, my ass. She’d been engaged in that conversation, had been responding to the person on the other end of the line. But her eyes stayed wary and he decided to let it go. He was here for a purpose. Marianne’s murder needed his attention, and he wanted to know Johanna’s secret.
“Sorry for barging in,” he said, “but I’d like to continue the conversation we started back in my office.”
She raised an eyebrow at him. “You mean about Marianne? Are the deputies coming back?”
He shook his head. “They’re gone.” She looked puzzled as he continued. “You brought up la Llorona.”
“Yes,” she said flatly.
Her voice had lost the shaky edge it had held a moment ago on the phone. Hell, now it almost sounded like it could freeze water. Her own form of self-preservation, he supposed. “You wrote your master’s thesis on her?”
Johanna slumped against her desk and ran one hand over her face, down her neck, let it settle on her chest. “Yes.”
“Why?”
She hesitated, and for a moment looked like she wasn’t going to respond. Then she spoke, her voice softer, more thoughtful. “My mother believed in her.”
Odd. Johanna had placed a strange emphasis on the word believed. Hadn’t her mother simply known about the story? Why would she believe in a ghost tale? “La Llorona is a legend,” he said.
“A legend based on a real woman who lived five hundred years ago.”
“It’s a kid’s story. Like the boogieman and the chupacabra.”
Johanna shook her head. “My mother believed la Llorona was real. Because of that, I’ve always been…curious…about the legend.”
She started when her cell phone rang. Her sudden jerk sent the tips of her fingers slipping under the vee of her sweater. His eyes followed the path as her hand settled on the swell of her breast. He swallowed, narrowing his eyes as he forced his gaze back to her face. Her phone, playing a traditional cumbia rather than a regular ring tone, continued for a full ten seconds while she stood frozen. She didn’t even look at where it sat on the desk.
He tried not to think about whatever might be going on in her personal life that warranted heated phone calls. A bad break-up, maybe? He hadn’t heard she was dating anyone, but she might be. Much as he hated to admit it to himself, he didn’t want her to have a personal life. It messed with his fantasy.
Enough. He had to get his head back in the game. Had to focus on why he was here —and that reason was not to stare at her breasts or get jealous over imaginary lovers or remind himself of the fantasies he’d had of her—fantasies featuring her naked. Her hot mouth on his. Her skin sliding sinuously under his.

About Curse of Passion

The ghost of la Llorona is said to haunt the riverbanks, always searching for her drowned child. She also haunts high school teacher Johanna Rios, whose own mother believed so deeply in the legend she tried to drown her daughters. And now the ghost has become real, a young woman murdered, and the safe world Jo created is falling apart.


Since returning home from his last tour of duty to become a school principal, Ray Vargas has fought his attraction for his employee, the sensual woman who’d once been the girl next door. But the Llorona Killer will not stop until he claims his final victim—Johanna—and Ray will do anything to protect the woman he’s come to love.
With a serial killer out to prove the curse is real, will Ray and Johanna’s future be drowned in the ghostly waters of the past? Or will the power of their love give them the strength to stop a killer…and heal their wounded hearts.

Melissa Bourbon, who sometimes answers to her Latina-by-marriage name Misa Ramirez, gave up teaching middle and high school kids in Northern California to write full-time amidst horses and Longhorns in North Texas. She fantasizes about spending summers writing in quaint, cozy locales, has a love/hate relationship with yoga and chocolate, is devoted to her family, and can’t believe she’s lucky enough to be living the life of her dreams.


She is the Marketing Director with Entangled Publishing, is the founder of Books on the House, the co-founder of The Naked Hero, and is the author of the Lola Cruz Mystery series with St. Martin’s Minotaur and Entangled Publishing, and A Magical Dressmaking Mystery series with NAL. She also has two romantic suspense novels, and is the co-author of The Tricked-out Toolbox, all to be released in 2012/2013.