On occasion of its release for the USA market, with a slightly different title and a totally new cover, here's a novel I had the pleasure to read and review a while ago, Lynn Shepherd's latest novel in the Charles Maddox literary murder series: A Fatal Likeness.

Here's how it is presented on amazon.com:

With The Solitary House, award-winning author Lynn Shepherd introduced readers to Charles Maddox, a brilliant private detective plying his trade on the gaslit streets of Dickensian London. Now, in this mesmerizing new novel of historical suspense, a mystery strikes disturbingly close to home—and draws Maddox into a world of literary legends, tormented souls, and a legacy of terrible secrets.

Synopsis: When his great-uncle, the master detective who schooled him in the science of “thief taking,” is mysteriously stricken, Charles Maddox fears that the old man’s breakdown may be directly related to the latest case he’s been asked to undertake. Summoned to the home of a stuffy nobleman and his imperious wife, Charles finds his investigative services have been engaged by no less than the son of celebrated poet Percy Bysshe Shelley and his famed widow, Mary, author of the gothic classic Frankenstein. Approached by a stranger offering to sell a cache of rare papers allegedly belonging to the legendary late poet, the Shelley family seeks Maddox’s aid in discovering whether the precious documents are authentic or merely the work of an opportunistic charlatan.

But the true identity of his quarry is only the first of many surprises lying in wait for the detective. Hardly a conniving criminal, Claire Clairmont is in fact the stepsister of Mary Shelley, and their tortured history of jealousy, obsession, and dark deceit looms large over the affair Maddox must untangle. So, too, does the shadow of the brilliant, eccentric Percy Shelley, who found no rest from the private demons that pursued him. With each new detail unearthed, the investigation grows ever more disturbing. And when shocking evidence of foul play comes to light, Maddox’s chilling hunt for the truth leads him into the blackest reaches of the soul.
Steeped in finely wrought Victorian atmosphere, and rife with eye-opening historical revelations, A Fatal Likeness carries the reader ever deeper into a darkly magnetic tale of love and madness as utterly harrowing and heartbreaking as it is undeniably human.

And here's instead my personal review of the same book (The title is A Treacherous Likeness , in the UK edition:


The Shelleys and their mystery 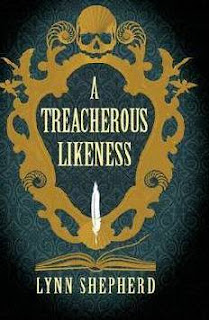 If you are familiar with the adventurous lives of the Young Romantics and their circle, you’ll love Lynn Shepherd’s new literary mystery, A Treacherous Likeness. If you aren’t,  you may love it even more.
You’ll find yourself glued to the pages of this mystery novel, based on an intriguing web of shocking discoveries which detective Charles Maddock unveils,  one after the other , while investigating on behalf of Percy Bysshe Shelley’s only surviving son.
On his quest for missing documents  he gets involved in the mysterious case of Percy Bysshe's first wife's death; he meets Mary Shelley and Claire Clairmont, once Byron's lover, and Mary's half - sister; he discovers his great-uncle once worked on that case and must know much about the secrets hidden in the Shelleys' past. If only he could speak to him, if only the old detective didn't live in a state of total  unconsciousness... (go on reading HERE)


Praise for Lynn Shepherd and A Fatal Likeness

“Shepherd shines again in this superb Victorian thriller. . . . The novel works equally as a family story, a blend of horror and mystery, and a plausible hypothesis about why so many women and children associated with Shelley died mysterious deaths.”—Publishers Weekly (starred review)

“A potent mixture of passion, intrigue, perversion, and betrayal, exploring the lives of Shelley, Byron, and their Romantic intimates through a Gothic lens.”—Lyndsay Faye, author of The Gods of Gotham
“A wonderfully ingenious novel: perceptive, gripping, and fascinating.”—Miranda Seymour, author of Mary Shelley
“Shepherd sets a new standard of brilliance in historical fiction with A Fatal Likeness. Her summoning of dead souls—Mary Shelley, Lord Byron, and their most intimate circle—is so psychologically penetrating, it feels like truth. Exquisitely rendered in Shepherd’s pitch-perfect prose, this tale will haunt the reader long after its close.”—Stephanie Barron, author ofJane and the Canterbury Tale.

Lynn Shepherd's next book, Visible Darkness,  is inspired to Bram Stoker's Dracula
and is due to be released in 2014.

Great reviews of Lynn Shepherds latest book along with a great Give Away!

I just had to reblog it: http://robinintheuk.blogspot.co.uk/2013/08/fly-high-us-release-for-lynn-shepherds.html

I did the HNS review for A Solitary House, and loved the atmospheric style of the writing. I'd love to win a copy.

I am so excited to read this book. I love reading about the Shelleys and the other Romantics, and recently read Jude Morgan's Passion and Mary Shelley's Frankenstein. Plus I'm a fan of Lynn Shepherd and really enjoyed The Solitary House, in particular.

I love everythig about this book- the setting, the mystery- please enter me. kescah at comcast dot net.

Am so wild for Shepherd's books. She just nails it with ambiance! Thanks for the giveaway!

Not read any of Lynn Shepherds' books but love reading mysteries

A mystery about Percy Bysshe Shelley and Mary Shelley sounds exciting. I would love to read it, since I have been a fan of Mary Shelley after reading "Frankenstein" when I was 12.Thank you for the giveaway.
denannduvall@gmail.com

I loved Shelley's Frankenstein and enjoy mysteries, so I'm very interested in reading A Fatal Likeness. The weaving of a mystery through the real connections between these famous figures seems intriguing!

This sounds like a great mystery novel, and I've been wanting to read some more of those! And the cover aaah

Great Giveaway I posted this on my blog http://romanceofpages.blogspot.ro/2013/08/giveaway-open-worldwide.html

I would love to read this book because I always love a good mistery novel.

I entered your giveaway.
It would be great to
WIN A COPY OF
A FATAL LIKENESS By Lynn Shepherd.
In response to your question of
Why would you like
to read A Fatal Likeness?
I would like to read this book because i enjoy reading and discovering new authors.
This sounds like a book i would enjoy reading.
Thank you for having this giveaway!