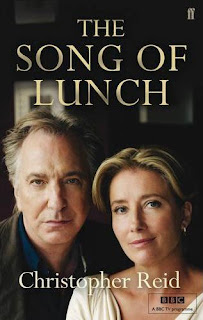 As time passes by, I'm more and more astonished at how daring British TV is.  TV shows about literature at prime time (Faulks on Fiction) and contemporary poetry dramatized by great, talented,  world-famous actors on one of the main state channels. I'm amazed.
A dramatised narrative poem might sound a bit dull but this one with Alan Rickman and Emma Thompson is wonderful.
The production is 50 minutes long, and is a co-production between the BBC and Masterpiece.
Screened on 9 October 2010 during National Poetry Month, now released in DVD, the production is unusual in featuring little spoken dialogue, the action instead being an enactment of incidents described by poetic monologue of the male character.
The Song of Lunch is a television adaptation of Christopher Reid's poem of the same name. It was directed by Niall MacCormick and stars Alan Rickman and Emma Thompson. Executive producer, her handsome husband, Greg Wise who peeps out from a bookcover two or three times in the 50 minutes. 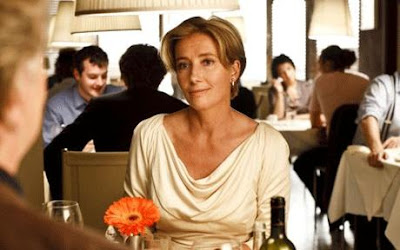 It tells the story of an unnamed book editor (Alan Rickman) who, 15 years after their break-up, is meeting his former love (Emma Thompson) for a nostalgic lunch at Zanzotti's, the Soho restaurant they used to frequent.
"The Woman" is now living a glamorous life in Paris, married to a world-renowned writer, (Greg Wise)  while the unnamed editor has failed in his writing career, detests his mundane publishing job and regrets the end of their love affair.
When he arrives at Zanzotti's he finds it under new management and much changed, and this seems to fuel his resentment about growing older and being left behind. The stage is set for an emotional and bittersweet reunion.
As the wine flows, and the couple rake over their failed relationship, nostalgia turns to recrimination.
The single film sees Alan Rickman and Emma Thompson working together once again – they both starred in Sense And Sensibility 1995 , as Colonel Brandon and Elinor Dashwood respectively, and Alan directed Emma in "A Winter Guest".

Greg Wise, executive producer, said : "We were all in utterly uncharted territory, for, as far as we were aware, a poem had never been made into a film before… what were the rules?"
So it was a completely new experiment and a fascinating one, a narrative poem made into a film for the first time :
"how were we to transpose verse into film - what were the rules, what was the grammar, how do we move from the interior monologue to dialogue?"
Christopher Reid, the author of the poem,  stated: "I wrote The Song Of Lunch after I'd finished A Scattering, largely a book about the death of my wife. I loved the scene in Ulysses where Joyce picks through the minutiae of a pub, and thought I could do the same for lunch. As I wrote it, it became clear I was rewriting the Orpheus legend, that it was a poem about death, about failing to bring anyone back to life. I left teaching shortly after and my successor taught using The Song of Lunch, and then realised it was very cinematic". 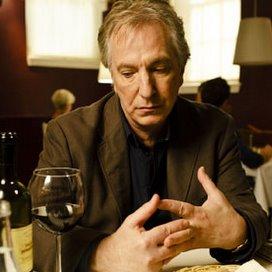 The result is brilliant, I can assure you : Greg Wise, his director Niall MacCormick and the awesome intense protagonists,  found the perfect way to convey each little nuance of Reid's poem. It is stunningly enticing. Clever, sad, true. You are there caught in each little gesture and look, caressed by Alan Rickman's voice, caught in the series of sensations and emotions the narrating "he" experiences in those 50 minutes.

So you did like it, after all! Glad to hear (read) it :)
Alan's voice is mesmerizing, and his facial expressions are priceless. Ok, Emma is not bad, too ;)
K/V

Beautiful. Thanks for dedicating a post to this show. I've always thought Rickman and Thompson are such a well-matched couple :)

I watched this when it was shown in October 2010. It was fantastic. I was pre-disposed to enjoy it because of my respect for Alan Rickman and Emma Thompson, but I think I would have loved it even if I'd never seen them before. Each of them conveyed so much both when speaking and when silent, to the extent that I was doubting whether there was in fact a narration of Alan Rickman's character's thoughts supplementing the dialogue until I checked your review! I haven't read the poem so can't comment on whether it was a faithful adaptation, but it was a most wonderful, thought-provoking piece which I didn't want to end.

Two fantastic actors who I really admire. Will watch the show, when I have more time:)

Isn't Greg Wise Emma Thompson's real-life hubby? :) Meant to record this when it was shown on TV, but I forgot about it. D'oh! I do like the Thompson/Rickman pairing. They seem to click so well, somehow.