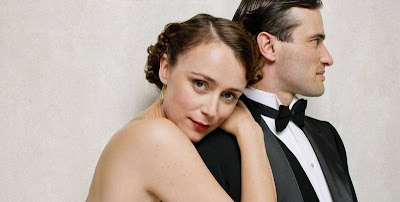 I know Upstairs, Downstairs  was one of the biggest TV hits of the 1970s, both with British audiences and around the world (not in Italy, it wasn't on Italian TV). Unfortunately, I have never seen it, not one episode, so what I cannot do here is a comparison between the original and this new re-make,  broadcast on BBC1 on 26-27-28  December, which I was lucky enough to watch on TV while I was  in London.
I liked it much. It's good period drama with a brilliant cast and great taste for costumes, locations, period details.
What I cannot do either is to answer the question "Is it as good as/better/worse than the incredibly successful Downtown Abbey?" , since I haven't seen the latter yet. But I'm going to do it soon, promise.
So I can only focus my review on BBC1 UPSTAIRS DOWNSTAIRS 2010.
I read that the ITV series showed life above and below stairs at a wealthy home in Edwardian London, complete with gossip, intrigue and affairs of the heart and this is what happens in the new series too. 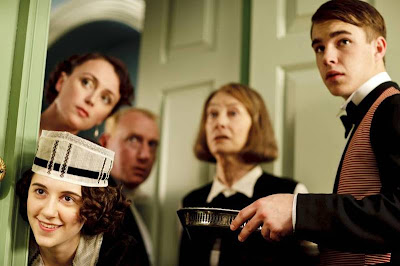 I've also heard that Jean Marsh played housemaid Rose and also co-created the series. She was among the ones downstairst also this time. First, she said in an interview, she had reservations about both her character's and the programme's return. Then her doubts vanished.
The new show picks up the action precisely  in 1936 with another family moving into the Bellamy family's old house at 165 Eaton Place.
The wreath above the mantelpiece is full of dust. The chandelier is covered with cobwebs. Then a key turns in the lock - and a handsome millionaire walks in, with the woman he loves in his arms... 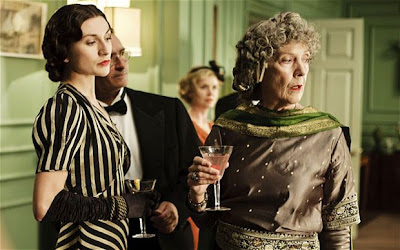 Sir Hallam Holland enters the iconic townhouse with his wife, Lady Agnes. With the help of former maid Rose, they launch a whole new era for the sumptuous London residence. Lady Agnes remarks: “This house is going to see such life!”
But storm clouds are gathering in Europe, and servants are no longer biddable and cheap. The Hollands’ first year at Eaton Place does not unfold as either Lady Agnes or Rose anticipates.
The drama  sets intriguing domestic plots against a sweeping historical background. There may be two families living in 165 - one upstairs and one down - but their fates are intimately linked. 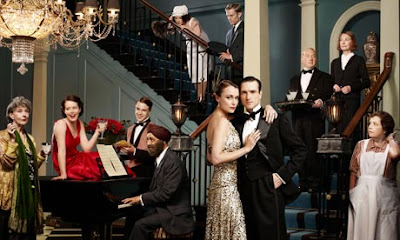 SIR HALLAM HOLLAND.  He appears to have everything. He has risen rapidly through the ranks of the Foreign Office, and has recently inherited not just 165 Eaton Place but a considerable fortune and a baronetcy. The events of 1936 will challenge and change him in ways he could not have foreseen. I like the journey of this character in the series very much.

LADY AGNES. The eldest daughter of the 12th Earl Towyn, she was reared in a very damp castle in Wales. Beautiful and aristocratic, she has never been well off. Despite financial hardship, and their failure to have children, her marriage to Sir Hallam has been happy and devoted. The sudden rush of new money thrills her, and she is determined to put her husband, and her home, at the heart of London high society.

LADY HALLAM. Maud, she is Sir Hallam’s mother, one of the women who helped to build the Raj. Newly widowed, she returns to England to write her memoirs, and  hopes to build a new relationship with her grown-up son. But thirty years of distance are not easily overcome, and there will be  heartache along the way. And secrets unveiled in the end.

LADY PERSEPHONE TOWYN. She  is the 20 year-old sister of Lady Agnes. She has been marooned in Wales due to lack of family funds - a situation Lady Agnes is delighted to reverse. But Lady Persie’s lack of education, and the stimulation of the London scene, make for a highly combustible mix. Especially when she starts a scandalous affair with one of the men downstairs and sympathising with the Fascists.

ROSE BUCK. She was the upper house parlourmaid at Eaton Place for almost forty years. Since 1932 she has eked out a living running a domestic employment agency - but a twist of fate brings Lady Agnes to her door. Initially engaged purely to recruit the servants for the Hollands, Rose soon proves herself indispensible to the running of the house.

MR PRITCHARD. Warwick Pritchard is sleek, discreet and quite beautifully spoken. Teetotal and highly strung, his exacting façade conceals deep kindness and real integrity. As the downstairs family settles in, he gradually becomes the moral centre of the household - though he still has a few surprises up his sleeve.

MRS THACKERAY. Clarice Thackeray is a widow. Passionate about her work, she expects the highest standards of herself and others. She follows the workings of high society through the pages of the Tatler. Romantic and affectionate by nature, she is also nosey, judgemental and a monumental snob.

MR AMNJIT. Educated, gentle, and imposing, Amanjit Singh comes to Eaton Place as secretary to Maud, Lady Holland. Having been in her service in India for many years, he is devoted to her welfare. His relationship with German/Jewish Rachel is touching.

RACHEL PERLMUTTER. She  is a German-Jewish refugee who comes to 165, as the new parlourmaid, in May 1936. Reserved and sophisticated, Rachel knows little about basic household chores, but is determined to make the best of her circumstances.

HARRY SPARGO. Good-looking and rather arrogant,  Harry Spargo enjoys his position with Hollands, but resents the social system that keeps him there. He enjoys a cautious camaraderie with Sir Hallam, but this is put to the test by the events of 1936.

IVY MORRIS. Just 15 years-old and  orphaned, she  is spirited, wilful,  likes red nail varnish and singing in the bath. Ivy would never willingly risk her newfound security at 165 but her hunger for love leads her, and others, into danger.

JOHNNY PROUDE. Aged 16,  he  launches a career in domestic service in an effort to escape a life spent down the pit. Charming and hard-working, he is popular with the other servants - especially Ivy - but comes to 165 with a troubling secret that, once revealed, will shatter the whole household. 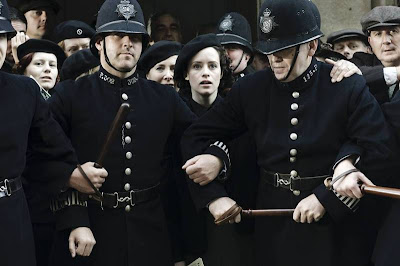 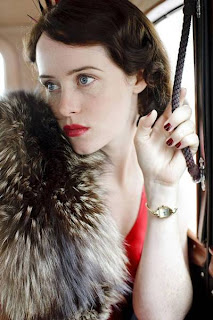 The sets are exquisite, especially the  ones for interior scenes. Exterior scenes – such as the spectacular recreation of the Cable Street riots were relatively few but always  essential to the storyline. I agree with Heidi Thomas, writer and executive producer when she says that
"There is also a very strong message of equality in Upstairs Downstairs,which is often overlooked. Because the drama treats both rich and poor with an even hand, it says to the viewer 'Whether you drip with jewels and are swathed in furs, or are wrapped in a pinny and scrub until you hands bleed, your story really, really matters'. It respects and celebrates every aspect of human experience, and that is a powerful thing".

You can still see the 3 episodes on BBC iPlayer,  if you live in the areas where the service is available.
Posted by Maria Grazia at Sunday, January 02, 2011
Email ThisBlogThis!Share to TwitterShare to FacebookShare to Pinterest
Labels: BBC Drama, Costume drama

I can't wait to see this!

I would love to see this. I still have very fond memories of the original series which was certainly longer than 3 episodes. Are there plans to continue the series or is 3 all we get?
Lucky you to see it already. That trip was timed very well!
I am glad it is not a remake as I doubt anyone could improve on the performances of the characters in the original series. But a continuation is a marvelous idea!

I loved the original show and had heard they were going to make a new one, I just didn't know it was so soon!