ANN SWINFEN, THE TESTAMENT OF MARIAM - MY REVIEW 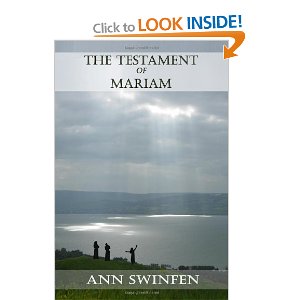 This book is both very gripping and moving, both very  familiar and extremely new, both poetic and definitely credible. Ann Swinfen was very brave at making up her mind to write Yeshua's story from a new point of view. Yeshua (Jesus) is a very human figure, a young man who deeply changed the world,  a rebel, a dreamer, whose revolutionary message  started a new era for mankind.
Yeshua's compelling story is told from his sister's point of view, Mariam. Her first-person account turns the New Testament events  into an amazingly involving novel.
Mariam is quite a modern character. She grows up in a hard-working peasant community, mutinous, impatient, unwilling to accept the traditional role of women in her society. Running away from home, against all conventions and propriety, to follow her charismatic brother Yeshua and his best friend Yehuda, Mariam shares in the excitement, the fear and mystery, but at last witnesses the apparent betrayal of the one and the tragic and brutal death of the other. The bond that connects Mariam with the two men from childhood till beyond death is the heart of the story which begins in Roman Gaul where old Mariam is a refugee from far-off Judah. She has turned her back on the past and lives there with her family. For more than thirty years she has kept her secret but now news from her native country and her illness start weakening her strength and her past comes back to haunt her.
Mariam is an admirable strong woman who follows her heart with no fear nor regret, who risks everything she has-  her dignity and respectability- to follow and support the two people she most love in her life, her brother and her betrothed.

Yeshua and Yehuda, friends from childhood and mates in their fight against injustices, united in their love for Mariam, are also very fascinating characters.
Yeshua has always had a charm on Mariam, has always succeeded in drawing the best out of her, has rescued and cuddled her in sad or difficult moments in her life, has given her the gift of languages and the gift of learning. He has always been different from the rest of the family, from the rest of Mariam's brothers.

Yehuda is the true friend and the true lover. He's ready to obey Yeshua and be loyal  to him even in his extreme, tragic choice. He's ready to become "the traitor", an instrument of destiny,  if that is  what Yeshua wants from him. He loves Mariam deeply and passionately too but, again, he's ready to renounce his passion if Yeshua wishes him voted to celibate. Finally,  he leaves Mariam to the possibility of a better life, once he has turned into a man on the run. True love involves the sacrifice of oneself and of one's selfishness... Yeshua's teaching.


The Testament of Mariam at Amazon
Ann Swinfen's site
Read an extract from the book
Posted by Maria Grazia at Saturday, January 22, 2011
Email ThisBlogThis!Share to TwitterShare to FacebookShare to Pinterest
Labels: Books, From my bookshelf

This sounds like a really interesting book--I love reading about this period in time, and the perspective of Mariam sounds fascinating, despite her modern trappings :)

It's on the list--thanks for the review, Maria.

There will be an interview and a giveaway soon. So stay tuned, Jane!