AT THE CINEMA - IL DISCORSO DEL RE (THE KING'S SPEECH) 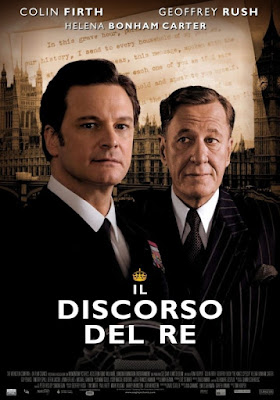 When there's so much fuss about something I am usually disappointed in the end. Not this time. I saw  "The King's Speech", just released in Italy as "Il discorso del re" and nothing disappointed me. Colin Firth even succeeded in touching my heart with his sober but forceful performance, he was the most human king I've ever seen on screen. Excellent! What do you think? Did  Her Majesty, Queen Elizabeth,  check how Tom Hooper represented her father in this film and, above all,  did she like it? I'm so curious to know her reaction to the movie. I'm sure she wanted to see it. She is lovely represented in it , as a sweet  little girl with her sister Margaret.

I think the Royals can't complain, the film is gentle at dealing with their history and just hints at Edward VIII 's sympathies for Nazism and Hitler;   it also depicts George VI in a very positive way, more positive than any historian has ever done so far. Actually,  this film focuses more on Bertie, the Duke of York,  as the man who unwillingly  happened to become  king George VI due to his elder brother's abdication (to marry divorced American, Wallis Simpson) ; it deals with the grown-up stammering prince who still  has to  overcome the fears  that  haunted his childhood, more than with  King George VI and his kingdom . We follow Bertie, the man,  through his struggle against his fears and his stammer, until  his  rewarding victory against his frailty and his coronation as the king of a nation on the brink of a second world war , a nation who couldn't admit a speechless king in a moment in which they terribly needed encouragement and motivation. 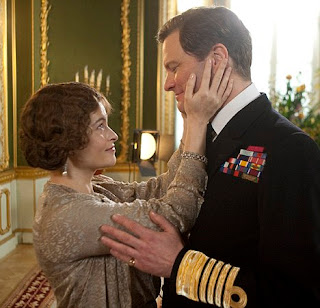 The movie is opened by a speech and closed by a speech. The first one, a failure which the Duke of York deeply felt, when  he stammered horribly during the closing  of the Empire Exhibition in 1925; the end of the story is , instead,   the successful speech King George VI pronounced in 1939 , when he managed to announce the break out of WWII and the involvement of their country  in the fight against Hitler with a steady voice.
The miracle took place thanks to  a long bizzarre therapy -  unorthodox for the times and the royal etiquette-  which the Duke of York underwent with the help of an extravagant Australian speech therapist, Lionel Logue, who eventually became his close friend and was even knighted. They actually remained friends untile the King's death in 1952.
During the war the King and the Queen stayed in Buckingham Palace , under the German bombing , with food and water rationed, just like all their subjects . After freeing himself from stammering , George VI , though  king by chance,  thanks to Churchill's  precious advice, chose to fight against Nazism and in the name of freedom.
A fantastic,  unforgettable couple, Colin Firth as the timid insecure king-to-be,  and Geoffrey Rush as the self-confident, full of himself,  therapist. 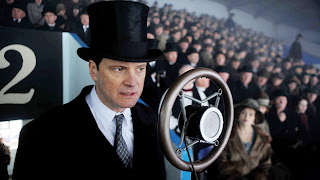 This film is unmissable. Amusing and touching at the same time. Director Tom Hooper, an expert in costume TV drama (Longford, John Adams), was blissed with a stellar talented cast including Firth and Rush, as well as Helena Bonham Carter as  Elizabeth, the king's wife, Guy Pearce as Edward VIII, Michael Gambon as the father, king George V, Timothy Spall as Winston Churchill and  Derek Jacobi as the Archbishop of Canterbury, Jennifer Ehle as Lionel's wife. 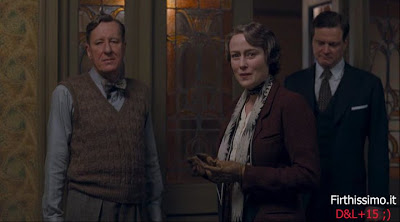 A final brief note .  How tender it was to see Lizzie and Darcy in the same room after so many years, but they didn't seem to recognize each other. Jokes apart, everybody knows Jennifer Ehle and Colin Firth were the protagonists of  the 1995 TV adaptation of Austen's Pride and Prejudice but also Geoffrey Rush has already worked with Colin Firth. They were together in the cast of an Oscar - winning movie: they were  respectively Philip Henslowe and Lord Wessex in Shakespeare in love.
Oscar Nominations: The King's Speech Leads
The King's Speech at imdb
Posted by Maria Grazia at Saturday, January 29, 2011
Email ThisBlogThis!Share to TwitterShare to FacebookShare to Pinterest
Labels: At the cinema, Colin Firth

Hi MG, I've already seen it twice but I think I'd like to watch it on the big screen once more. It's absolutely superb. Was it that good although dubbed into Italian? How did they manage to convey Colin's and Geoffrey's majestic performances? All the best. Ciao. A.

I'm glad you got to see it Maria! And that you loved it! I forgot that Colin and Geoffrey were in Shakespeare in Love together, although that isn't one of my favorite Colin Firth characters...

Wasn't that Mr. Collins in the movie too? LOL!

@lunarossa
I saw it in English, A. I couldn't bear dubbing. And they were brilliant! I really hope both will get what they deserve! (IYKWIM)
@Meredith
Colin Firth as Lord Wessex was a sport, but not his best role, of course. Mr Collins, you ask? Did I miss anything?

Lovely review, MG: I agree with everything you've said. I've watched trailers in Italian but although it's not that bad I couldn't stand listening to Colin dubbed!

Meredith is right, David Bamber(Mr Collins 1995) made a short appearance - a cameo? - as the stage director who rejected Logue when he auditioned performing RIII's speech.

I agree it is a great movie - Colin Firth has long been one of my favourite actors, ever since he was in the movie version of 'Another Country', but I also loved Geoffrey Rush's performance. Really felt for him in the scene where he has his Shakespeare audition and the people are so snobby about his Australian accent!

I watched this film with my 17-year-old son and we both loved it - which goes to prove that it has universal appeal (few other films fall into that category!).

Presumably it's big in Italy, as Colin lives there part of the time?

I took my 86 year old mum to see this. We both loved it!! Accolades must go to Colin Firth and Geoffrey Rush for their fine performances. A must see!!

First of all, I am huge fan of Firth and have been looking forward to this movie. I was delighted to read your review. And second of all, I have a much personal reason for wanting to view this because my Little One suffers from a speech disorder and dyslexia. I think it would do well for him to watch this.

@Avalon
Yes, it will definitely help him. This film can be so amusing, delicate and touching at the same time. He will find great hope in this story. My sister is a speech therapist and she often tells me about her little everyday victories against dyslexia, speech disorders, stammer and so on. Not always easy, but never impossible.

I also feel pretty curious about the Queen's thoughts on the film. I think they did an excellent job, and I really loved it. I'm crossing my fingers for an Oscar for a well-deserving Colin Firth and cast!

Maria,your review for The King's Speech I found very good! I saw for the first time the movie on 01/29, saturday for me too. Every actor in it was excellent and Colin with his extra ordinary talent gave the film its' power!

I can't wait to see this! CharleyBrown says it's available online, but I'd rather wait for the DVD.