I know, I  live at one-hour-drive distance from Rome. What's so special in being there, then? To me it is very special. Each time. And each time I discover more. Each time I realize I have still so much to learn .
I love being in Rome as a tourist (because more often it happens I'm there on errands which are job related)  and it has happened again in these latest days, thanks to my very special friend, K./V . who lives  there and hosts me each time I need a brief escape from ... my hermitage in the mountains.
I stayed there for a couple of days and we had a "bellyfull of art, sightseeing, wandering about the centre alleys and the picturesque landmarks, museums and exhibitions. Do you want to have a look at some of my  photos? Not work of arts,  but my own shots of breathtaking emotions.
ST PETER'S FROM CASTEL SANT' ANGELO 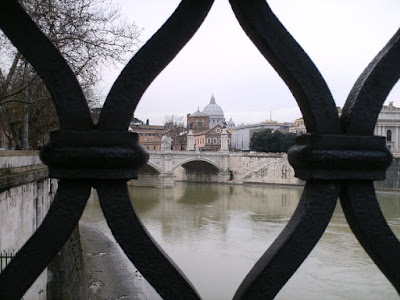 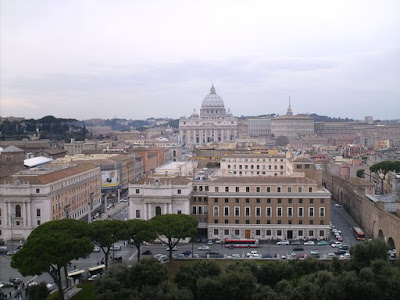 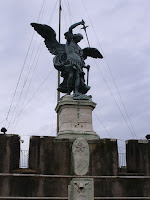 The Mole Adriana, now called Castel Sant'Angelo, was originally built between 123 and 139 AD as the monumental grave of the Roman Emperor Adrianoand was used as a tomb by the imperial families up until the death of the Emperor Caracalla (217 AD). From what remains it is possilbe to imagine the original aspect of the "Mole", which became, later on, a  true fortress. The name Castel Sant'Angelo dates back to the late 6th century when under Pope Gregory the Great it was renamed because of the legendary miracolous apparition of the Archangel atop the Mausoleum, putting an end to the terrible epidemy of plague. 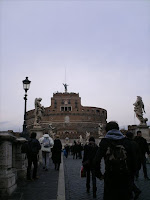 In 1527 Rome was invaded and occupied by troops led by Charles V (Sack of Rome) and, on that occasion, Pope Clement VII fled in safetyf, from the Vatican to the fortress, through the famous "Passetto", a passageway which starts from Saint Mark's bastion and runs on top of the wall that encircles the Vatican). Castel Sant'Angelo has been used as one of the impressive locations in  Dan Brown 's novel "Angels and Demons" as well as in  the movie based on it, but it was also one of the settings of Tosca by Giacomo Puccini. By the way, I saw all the settings of Tosca in my Roman errands these days: The Church of Sant'Andrea della Valle (act 1), Palazzo Farnese (act 2) and, of course, Castel Sant'Angelo (act 3) where Cavaradossi, imprisoned by Scarpia and overwhelmed by memories of Tosca,  sings "E lucevan le stelle". 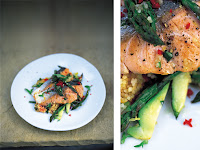 Can you see? Once in Rome you can't avoid a bellyfull of art! But thinking of more profane bellyfulls, I ate delicious food, too. We had lunch in a  famous trattoria near Via del Corso and,  at night, K./V. prepared  a very  exotic meal just for me, one of  Jamie Olivier's recipes, cous-cous and salmon. Have you ever heard about it? Maybe. Ehm... anyhow, it was tasty! It was my first try but ... I want to make it myself. soon It is rapid and delicious. 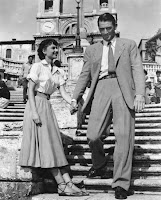 Among my firsts, I went walking along Via Margutta for the first time: iti s a small street looking southward toward The Spanish Steps  which in the 1950s, after the film Roman Holiday ,  became an exclusive road, and a residence of many famous people, like film director Federico Fellini and which is now a place with many art galleries and fashionable restaurants.  I visited Galleria Borghese for the first time, which I had longed to see for so long and never had been able to before, and which hosts one of the most stunning collections of the world (have a look at the link!) and, only until 13th February, an exhibition of Lucas Cranach's works, Cranach, The Other Renaissance.
Finally I saw the Trevi Fountain from the inside for the first time, have you ever tried? It's curious to see the always crowded square and the fountain from the windows at its back. As evocative as observing someone you know very well from a hidden corner and a completely new perspective. Curious, indeed. 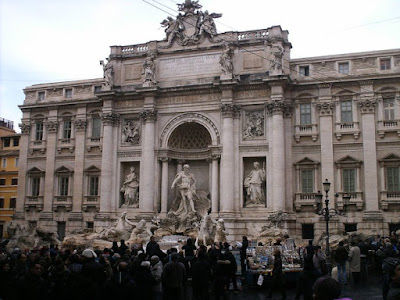 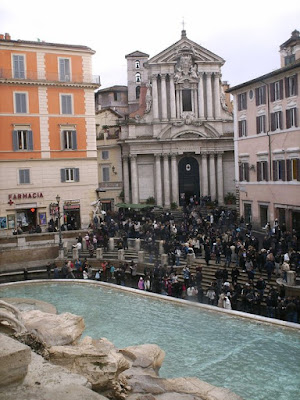 I'd love to visit Rome. At the moment we have a detective programme on tv called Zen and that's based in Rome. My son now wants to go and live there.

@Debs Carr
Sshh...keep it secret, Debs. But I saw the first episode of Zen just at my friend's house in Rome after eating cous-cous and salmon and I liked it very much. Rufus Sewell, Greg Wise, Caterina Murino. Now, I want to see the rest of it!
My son wants to live in London and play football in the Premiere league. Can we arrange a swap? Where do you live?

Lovely photos! I adore Rome. I saw Zen and I wasn't much impressed. All the men are British and the (pretty) ladies are Italian... A mixture of English and Italian accents, no consistency. Rome almost deserted. ???? But Rufus Sewell is gorgeous and Rome even more! I feel so homesick!
Baci. A. PS. Would Leeds United be ok for your son? Not Premiership but pretty good anyway...

I absolutely agree with Lunarossa re Zen: they must have shot it in August, judging by how deserted Rome looks... but the live recorded dialogue tells another story: the environment is too noisy, I barely understood half of their lines!
Anyway, it's a pleasure to see that Rome is still so popular overseas :)
Thank you MG for this lovely report of your first visit to Rome in 2011 :)
xx K

Oh Maria, I love your photos! It is wonderful that you still find wonder in your area. I know some people that have lived in my area their entire life and never visited some of our local historical attractions. That is really sad too, not to support your homeland.

I will have to post some photos of my Rome soon. My city was named after your Rome.

I feel the same when you say each time in Rome is different. I miss Rome, I hope I'll be able to plan a trip soon ;)