BOOK REVIEW - WHEN WILL THERE BE GOOD NEWS? by KATE ATKINSON

WHEN WILL THERE BE GOOD NEWS? : “ A true literary thriller”.
KATE ATKINSON:  “A genuinely surprising novelist. In the best possible way”.
Not my words but my thoughts. 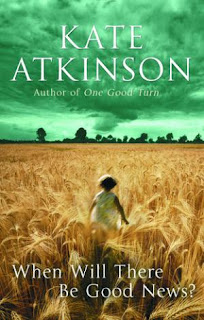 The novel opens with a shocking violent event: a six-year-old girl witnesses her own family’s appalling slaughter. Her mother, elder sister and baby brother are stabbed to death by a stranger while they are walking in the country. The evil man,  who will change Joanna’s life forever,  is a complete stranger.
What more can happen if it already starts with such a tragic event? Unexpected twists abound till the very end of this novel. A real page turner.
A huge surprising jigsaw puzzle
The lives of many characters, extremely well-drawn and so involving, coincidence after coincidence, will cross one another around Joanna’s life. Thirty years later she is a doctor, a G.P., in Edinburgh. We also meet Reggie (Regina), her 16-year-old nanny, whose mother drowned not long ago while on holiday with her new partner; her brother Billy and her private tutor for her Latin and Greek A-levels, terminally ill Ms MacDonald; Jackson Brodie , former policeman and private detective - the protagonist of two well-known novels by Atkinson, One Good Turn and Case Histories - is on a journey for a very personal investigation but gets caught in the same web of events as Reggie, Dr Hunter and Chief Inspector Louise Monroe. The latter nearly had a romantic connection with Brodie in One Good Turn but is now surprisingly – even to herself - married to Irish orthopaedic surgeon, Patrick. 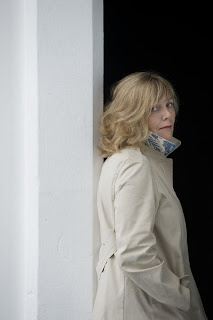 Mr Hunter, Dr Joanna Hunter’s husband, is investigated on for a suspicious fire at one of his arcades, by Inspector Monroe and her assistants but she is also the one who has the hard task to warn Dr Joanna Hunter that the guilty of her family’s massacre, Andrew Decker, is now free after 30-years spent in a prison. Among the characters also Joanna’s father, Howard Mason, writer, the Great Pretender in Joanna’s mind. So many pieces will form a complex surprising puzzle the readers themselves will put together little by little, page after page, going through a roller-coaster of emotions, discoveries, reflections, twists and turns.
Coincidences
Is there a philosophy behind the story? More than one, I think. The leit-motiv is , “How much are we governed by circumstances beyond our control”? It is impossible, Atkinson seems to think, to take any action in a void space, to live your own life not completely connected to the lives of others. "A coincidence," Jackson Brodie says, "is just an explanation waiting to happen." And there is an incredible number of coincidences in this story. You think them unbelievable at first, while reading, but there’s something Kate Atkinson writes immediately after that makes it possible and plausible to you.
Literary references and dry humour

There are numerous literary references and quotations in Atkinson’s prose: in the title of the chapters - for instance, She Would Get the Flowers Herself, Nada y Pues Nada, Great Expectations - and all through the novel (“she was the golden bowl to him”, “she had always preferred North and South to Wuthering Heights”). Reggie is a young literary genius and the pages dedicated to her point of view of the story are full of references to Greek and Latin classic literatures. But, of course, what impressed me most was to find a bit of Austen, too,  in Atkinson’s dry humour: “There had been another man once. The kind of man she could have imagined standing shoulder to shoulder with, a comrade-in-arms, but they had been as chaste as the protagonists in an Austen novel. All sense and no sensibility, no persuasion at all”. (This is Chief Inspector Louise Monroe thinking about Jackson Brodie before they meet again by chance after long time, both married). 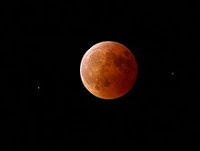 I have to thank , heartily,  my friend Antonella- lunarossa that on occasion of our pleasant chat for My Blogger Buddies wanted
1. to give away a new copy of this great novel she had just finished reading
2. to send a copy as a gift also to me , knowing I really love reading good books.
She is so fond of this British writer that she met her at a talk she gave in York, where Antonella lives. Here's her post dedicated to the memorable meeting with Kate Atkinson.


Thank you so much, Antonella, for making me know about Ms Atkinson's books.
It has been greatly appreciated.
If you haven’t discovered this wonderfully gifted writer yet, here is Kate Atkinson's official site and two interesting interviews, one is at http://www.powells.com/authors/atkinson.html , and the other one from The Times On Line.
I’ll leave you with one of my favourite quotes from “When Will There Be Good News?”

I'm actually not much of a "thriller" fan, but your review and wonderful connections has made me curious! It's an interesting premise. Thanks for sharing your review. I'll have to look into this one.

@mjmbecky
Well, I'm not a "thriller fan" either but there so much more in this novel and it is so well written. If you get it and read it, you'll understand what I mean. It is impossible not to get caught into its web of emotions. Great book.

This does sound like a good thriller. I wouldn't have thought so with the cover. Your mention here has got me interested. I still have Case Studies to read as well as there were good reviews for that too.

@vvb32reads
Hello, Velvet. I'd read that book you have asap. If it is as good as Ms Atkinson's latest one, it's absolutely worth it.

Hi MG, What a great review of a great book! You've caught the essence of the novel so well that there is nothing I can add, except for saying that Case Studies is also excellent! And I like your part about the literary references! I'm so happy that you liked the book! Ciao. A.

@lunarossa
Hi, A. Thanks again for your beautiful gift. You've opened a new world to me!
Just wanted to say, I've double-checked the title of Ms Atkinson's book on her site and it says CASE HISTORIES, so I wrote CASE HISTORIES ...How is it that you and vvb32 know about a differently titled book? Am I wrong? If you can help me to ... solve the mystery, I'll be grateful. Chief Inspector MG.

I really enjoy reading the Jackson Brodie books by Kate Atkinson. I went and heard her talk at one time and she was funny and warm, and seemed absolutely genuine. I haven't quite been brave enough to try any of her other books just in case I don't enjoy them as much. I will one day though.