WHAT I HAVE BEEN WATCHING 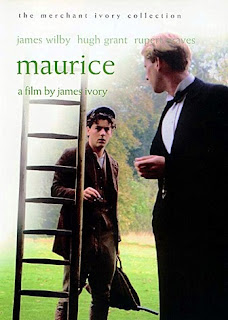 1. I think I've told you ( HERE ) about my E.M. Forster period, dating back to my university years and soon after. I read all his novels and saw several of  the beautiful films based on them. I hadn't seen this one yet, MAURICE (1987),  starring James Wilby, Hugh Grant and Rupert Graves and directed by James Ivory.
Since I first studied Oscar Wilde and read about the tragic descent from his huge success to the  hypocritical public assassination of his character due to his homosexuality, I've been always attracted by the English people's controversial relationship with that reality, especially during the Victorian and Edwardian Ages.Homosexuality a crime persecuted by law? Punished with hard labour sentences? Absurd but true. His homosexuality was a mark which made E.M . Forsters's life frighteningly complicated, especially as a young man living in England in those years. And his personal, suffered attempt to hide or even correct his nature, his fight  against his own natural instincts considered unnatural by the rest of society,  became Maurice's story. 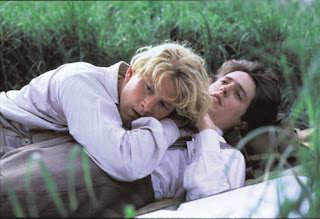 This novel was published in 1971, only after the death of its successful author, who struggled all his life through to hide his homosexuality to his audience who  loved his HOWARD'S END, A PASSAGE TO INDIA, A ROOM WITH A VIEW deeply. The novel is remarkable for its time in describing same-sex love in a non-condemnatory way. Forster resisted publication because of public and legal attitudes to homosexuality — a note found on the manuscript read: "Publishable, but worth it?". Forster was particularly keen that his novel should have a happy ending, but knew that this would make the book too controversial. However, by the time he died, British attitudes and law had changed. Fortunately. I really loved this lyrical adaptation by James Ivory. Tender, soft, touching, never vulgar with a brilliant cast (already mentioned at the beginning) including Ben Kingsley.

2. I also saw a  2-part series from Italian State TV RAI Uno , CARAVAGGIO. I wanted to get a more human picture of this artist I've always admired , since I was at school and studied his impressive paintings on my Art books as a teenager. Guess what? When I first saw his huge paintings in front of me at S. Luigi Dei Francesi ( a baroque church in Rome), I shivered and was moved to tears: his "Vocazione di San Matteo" and "Martirio di San Matteo" were there in front of me and I just couldn't avoid being that moved.
Caravaggio's real name was Michelangelo Merisi, he was born in 1571 and his life his a tragic adventure novel well told in this Italian TV production. 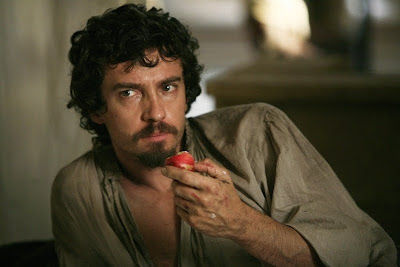 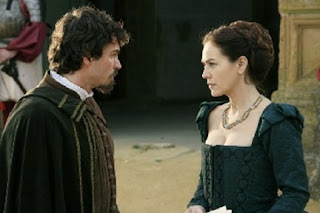 Alessio Boni is a credible and compelling "Prince of the Rebels", as Caravaggio has been nicknamed for his reckless, rebellious , aggressive temper. This period drama, set in Milan and Rome between the end of the 16th and the beginning of 17th century, is a real picaresque tale: Caravaggio travels through Italy in search of fame living among the homeless at first, begging for food at times, meeting both prostitutes and noble ladies, fighting to duels and getting drunk, living in promiscuity with men and women, hated and loved by noble men and men of the Roman Church, always struggling for his own liberty and independence in a time when he had to witness Beatrice Cenci's unfair tragic trial and execution or Giordano Bruno's burning for his heresy. He was imprisoned several times, dreamt of being one of the Chevaliers of Malta and succeeded in becoming one for a short period, he even killed a man and was a runaway in the final part  of his life. But what is most important, he has left to all of us his incredible human portraits of saints and his biblical scenes, his masterpieces, that were often misunderstood and criticized during his life because they were too forward , too modern for those dark times. 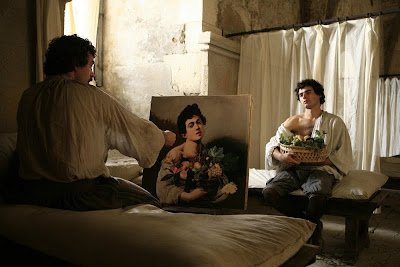 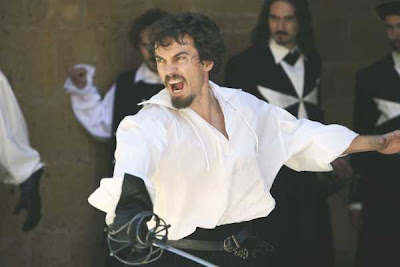 My love for Art and my fondness for period drama found contemporary satisfaction while watching this beatiful miniseries.
Now I'm ready to go and visit Caravaggio Exhibition at the Scuderie del Quirinale in Rome tomorrow. I'll tell you about it, promised.  I'm so excited!
Posted by Maria Grazia at Monday, April 05, 2010
Email ThisBlogThis!Share to TwitterShare to FacebookShare to Pinterest
Labels: From Books to Movies, My DVD collection

I haven't seen Maurice or read the book, even though I love E.M. Forster and Ivory's films. Now that I have read your post, I'll try to find the film and see it.

This is such an exciting post! I have never even heard of Maurice (already in my Amazon cart). Nothing more exciting than to discover new books by a beloved author! And Caravaggio!!! I find myself increasingly envious of your Italian TV.

Maurice has been sitting on my shelf for years, unread. I really want to take the time to read it this year--I've enjoyed Forster's other books so much, and now after reading this post, I want to watch the movie, but can't until I've read the book.

Almost everything I know about Caravaggio I learned from reading Jonathan Harr's book, "The Lost Painting: The Quest for a Caravaggio Masterpiece," which was amazingly good. Can't wait to read your report on the exhibit in Rome. Sounds perfect :)

I love E.M. Foster but I’ve never read Maurice so your great post reminded me that maybe it is time I get the book out of my shelf :) But I had no idea about the movie so thank you for the review.
I’m with Alexa, there’s nothing more exciting than discovering a new book or a movie!

@Elvira
Hola , querida! I?m so happy you've found the time to drop by! James Ivory /E.M. Forster are are a wounderful combination. I hope you'll like the movie. Besos.
@Alexa, Jane, Lua
Thanks for your kind comments. I'm just back from Rome. Caravaggio exhibition was worth 1 hour and half queueing. I'll tell about it, promised. It was a beautiful warm spring day in Rome and I had a very good time. Big hugs to you all.

look forward to your comments on the exhibition

AWWWW, MG!
You bring me back to the happy years when I first discovered James Ivory AND Forster, thanks to the delightful A Room with a View and then this impressively touching Maurice. On a similar subject there is another very good movie: Another Country (1984), a powerful condemation of the public school system - among other social issues ;-) - in UK: I highly recommend it!

@Karen
Another country? Curious coincidence! I've just borrowed it from a very dear friend of mine!
;-)
I'll see it asap!
Thanks for your kind comments
MG