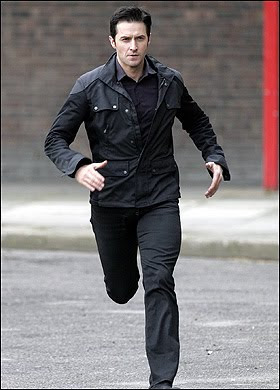 More than running from someone, Lucas North (Richard Armitage)  seems being chasing someone. Look at his arms and hands. They are ready to attack,  catch and hold tight. This is a still of an  action scene from SPOOKS 9 (crew and cast are shooting in London),  from  a snippet published in THE SUN last 31st March with a cryptic comment which has already stirred hypothesis, claims, perplexities, anxiety, fears, tremors, restlessness in various RA dedicated forums. The comment to the picture says: "SPOOKS star Richard Armitage returns for the drama's ninth series and becomes embroiled in what bosses say is a "dark secret that leads to the ultimate betrayal".
Who is Rich (as The Sun and friends of mine call him) running after , then? My answer is... Spooks scriptwriters!
After what other scriptwriters did to his character and a whole successful BBC show (namely, Guy of Gisborne and Robin Hood 3), he can't bear running the same risk with Spooks! So, run, Lucas/Richard, run! Catch and strangle them! Guy of Gisborne and John Porter are with you! 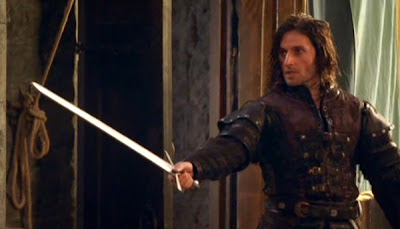 While Richard runs and gives their comeuppance to crazy scriptwriters, we can get ready to listen to him in BBC 4 Clarissa next Sunday. The epilogue of the unfortunate never-born (or one-sided?) love story between the heroine and the rake, Robert Lovelace, can  be but a tragic one. Let's get ready to face the inevitable and be brave. It is said that  the 18th century readers of Richardson's novel cried a lot on Clarissa's sad ending. What about us next Sunday? I'm curious to read the different reactions all over the blogosphere.

signature by kiteflier
You can see her wonderful graphic works at
http://community.livejournal.com/dreams_of_fancy/

For all the admirers of the winning combination Georgette Heyer's Regency novels/Richard Armitage's voice, there's another precious audiobook coming out for Naxos : THE CONVENIENT MARRIAGE. It will be released on 2nd August and can be pre-ordered at Amazon.UK. I haven't read the book yet. So, first step, get a copy of The Convenient Marriage. Second step, pre-order the audiobook. Third step, start hoping to receive it before the publication date, as it happened for Sylvester and Venetia.

Finally,  if I had been a fond admirer of talented Mr Armitage - which I definitely AM,  I know, but wait for the rest of it! - living in London (so, you see, that can't be me),  I wouldn't have missed the chance to see the preview of the first two episodes of Strike Back at  BAFTA premises in Piccadilly on Monday 19th April at 6.15pm. . But I live in Italy and I'll be working on that Monday. Sigh! I'll have to wait till... when? Sky 1 starts airing Strike Back in the week between 1st/7th May . And -  again -  since I live in Italy -   but even worse - my Sky 1 channel speaks Italian and broadcasts different programmes!
BTW, even if you live in London, it's too late for the preview. Tickets are sold out for that event. Let's hope we can read the enthusiastic comments of the lucky ones, at least.
(Once again thanks to Annette for keeping us well informed and updated with her site  http://www.richardarmitageonline.com/)
Posted by Maria Grazia at Friday, April 02, 2010
Email ThisBlogThis!Share to TwitterShare to FacebookShare to Pinterest
Labels: Richard Armitage

Thank you for this, MG! It's just so sad that I'm so far away from London! I will just have to wait for news then.

@Jac
Just like you, Jac. I'll have t wait and be contented with other people's comments on the event. Fortunately, RA's community on line is enthusiastic to share and very generous!
Have a nice weekend!

Just hope that he's not running out of the series, like many of my favourites already did! Have a lovely Easter. Mum and dad are here but it's very cold and rainy. Ciao. A.

I wish I could see Strikeback too, ASAP! And I am not looking forward to the sad end of Clarissa!
Love your take on why Lucas is running. Get those rotten scriptwriters, indeed!

@lunarossa
This is what we all fear, A., that Lucas North might be bound to leave the series as a traitor. I wouldn't like that. Not at all. Enjoy Easter time with your family, then!
@phylly3
I can't wait to see Richard as John Porter. It's a promising complex character, from what I got reading the book. I know it'll be different but...I bet Richard will be at his best.
Clarissa's finale. Guess what? I, too am not waiting for this last episode as eaferly as for the first three ones.
Have a great Easter weekend, P!

Well, based on the other seasons we may well believe Lucas can have a tragic death very soon... Maybe not, but who knows? Some screenwriters are just crazy!

@Luciana
To be honest, if Lucas should die as a hero serving his country -something like RPJ/Adam Carter- it wouldn't be that bad. But they speak of betrayal...I wouldn't like the idea of his being a double-agent and leaving the series as a traitor.
Maybe it is better to wait for next autumn and hope for the best. Happy Easter Time, Luciana!

Oh my gosh, he's so handsome it's incredible! *swoon*

...And back to planet Earth again. Thanks for the info, pic and links! :) Have a nice easter!

@Traxy
Recovered from swooning? Yep! Here you are! A very good Easter time to you too!

He's been in but ONE series of Spooks that we have seen so far in Australia, i can't believe the goss.that he will be killed off . . . so soon . . . and as a traitor! no wonder he's doing audio-books, no one leaves him round long enough!
Thanks MG for another great blog. am away from my own computer for 4 days and borrowed someone else's to catch up on Friday. Off to Amazon to place orders for audios and then shall plug in to Radio 4 Archive for episode 3 of Clarissa.
Have a wonderful Easter break

@mesmered
Well...you still have series 8 to go through, then. Again, let's hope we misinterpreted the sentence.
Enjoy your Easter break, too! Big Hug, P.

I have been watching Spooks since series 1 and have enjoyed all their leading men, none yet have disappointed and I am sure Lucas will be another who is working for Queen and country. I have to say that RA is not doing my blood pressure any good when going for treatment, sitting there with my iPod and his talking books as my entertainment. However I have now finally got round to ordering Venetia and looking forward to it. Talking to my friend who has read all of Heyer's books The Convenient Marriage is a good book, she got me interested in them with the Spanish Bride which is also a Georgian romance and based in part on fact. Heyer did a lot of research and is always factually accurate. Loving the blog and will keep following MG. Happy Easter, LJ.

@ElleJay
Hi, LJ. Welcome back! I too have been watching since series 1 and really hope these new scriptwriters won't spoil one of my favourite shows and , above all, my favourite spook ever, Lucas North! I've finished reading and listening to VENETIA last week so I'm glad I can start looking forward to a new Heyer narrated by Richard. Then there is STRIKE BACK coming out in the first week of May! Lots of Richard ...Not good for our blood pressure, you say? Impossible! His wonderful voice will help you go through your treatment and escape sadness. I'm sure of that. Happy Easter to you, LJ. A Big Hug. MG.