FANCY A WALK IN THE CLOUDS? 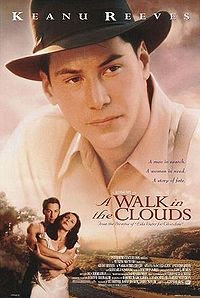 I did it. I went for a couple - of - hour’s walk in the clouds this afternoon. It was an attempt to escape blue mood and even depression at the idea of spending my Sunday afternoon coping with a massive ironing session. So, as I usually do, I chose a DVD from my collection, put it in the player and… walked in the clouds. It was so romantic! I must confess I sometimes stopped ironing and stayed still, punches on cheeks, bent on the ironing board, staring dreamingly at the beautiful landscapes, in rapture when the most romantic scenes appeared on the screen. Don’t worry. I did my duty of perfect housewife, I mean, I ironed till the last little piece of clothes.
A WALK IN THE CLOUDS is the latest acquisition in my DVD collection. A gift, actually. From Spain, from my niece who spent there her summer holidays, double audio English or Spanish. It is, a 1995 American movie , directed by Alfonso Arau and based on the 1942 Italian film “Four Steps in the Clouds”. I never happened to see it on TV, though I remember it has been on more than once. 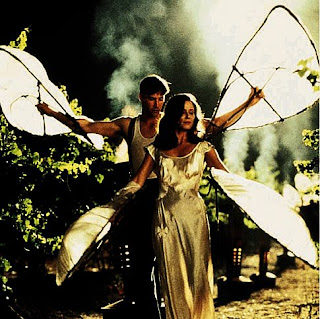 Shortly after the surrender of Japan, marking the end of World War II, Paul Sutton returns to San Francisco to reunite with his wife Betty, whom he had married just the day before he departed for the Pacific. The war has left him with emotional scars and he experiences flashbacks on a regular basis.
Paul's reunion with Betty is strained, especially after he discovers most of the letters he wrote her were set aside unopened. He is determined to make a go of the marriage, however, and hopes to establish a new career for himself. Betty insists he continue to sell candy door-to-door, and he sets off to Sacramento.
En route, he meets a beautiful young woman Victoria Aragon, a Stanford University graduate student whose Mexican-American family owns a vineyard in the Napa Valley. When he learns the unmarried woman is pregnant by her professor, Paul offers to introduce himself to her very traditionalist family as her husband.
Victoria's father is infuriated, not only that she married a man below her social standing, but without his permission as well. Paul's initial plan to quietly slip away and continue on his journey, leaving Victoria's family to believe he abandoned her, is derailed when her grandfather Don Pedro encourages him to stay and help with the harvest. Paul and Victoria try to ignore their growing attraction for each other. His desire to salvage his marriage prompts him to return home, where he discovers his wife is involved with another man. This was an extremely weed winding situation. She has applied for an annulment, to which he readily agrees, and he returns to the Aragon estate to ask Victoria to marry him. An argument with her father leads to a disastrous fire which destroys the vineyard, but the family are certain they will recover from their loss with the help of its newest member.

The director chose to give this tale the colours of a dreamy romantic fairy-tale. Magic sunsets and sunrisings make the visual setting of the story incredibly beautiful, fit for a fairy-tale in fact.
The two protagonists are young and charming, disenchanted, good –hearted, and hit it off immediately with Fate playing with their lives. Several mistakes and weird events make their paths cross more than once. They are destined to be together.
Paul falls immediately in love with Victoria’s beauty and, especially, with the fact that she has a large loving traditional family around her. Something he has always only dreamt about since he was brought up in an orphanage. So he is sort of hooked by the atmosphere there in that great mansion and doesn’t manage to go away. He actually wants to stay more than everything else but his strong sense of honour and duty stirs him to go back to his wife.
Victoria falls immediately in love with Paul’s generosity, disenchantment, sincerity, kindness, loving care for her. He is so incredibly different from all the men in her life. Her strict old-mannered father who promises to kill anybody who stains the honour of the family or her lover, the professor who diserted her when she discovered she was pregnant; none of them have never loved her nor treated her like Paul.

The script sounds rather melodramatic more than once, some turns of the plots are rather expected or unbelievable. But a walk in the clouds is something suspended above reality, something you can go for only suspending disbelief… this is what you have to do to enjoy this romantic tale … believe in the unbelievable, accept the idea that “everything is possible” .
Finally, the international cast includes wonderful actors: Keanu Reeves (Paul), Aitana Sànchez-Gijòn (Victoria), Giancarlo Giannini (Victoria’s father, Alberto Aragon) , Anthony Quinn (Don Pedro Aragon, Victoria’s grandfather), Debra Messing (Betty, Paul’s wife).

You're pretty convincing. Might give it a chance since usually Keanu movies are not a staple in this household. For next time i need to iron.

@Ragtag
It's a good idea. A good comedy or a romance make boring tasks less ... heavy. Thanks for dropping by.

That sure beats the ironing

I like this movie too. :)
Putting in a good one really does help the laundry folding/ironing go by faster!
~Nat

@R.A.FanBlog
Thank you, Nat, for dropping by and sympathize. Cheers!

Errata corrige!
The teacher corrects herself :(
....dropping by and sympathizing.

Its Victoria!!
not Virginia....