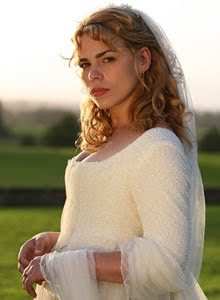 Billie Piper (on the left as Fanny Price in ITV Mansfield Park, 2007) returns to BBC One to star as Betty, a young wife and mother who falls deeply in love with a Polish neighbour with disastrous consequences, in Kay Mellor's A Passionate Woman.

A Passionate Woman is made by Rollem Productions and is adapted from Mellor's worldwide smash hit stage play.
Filming starts in Leeds this month and the drama will screen on BBC One next year.

Set in Leeds in the Fifties Cold War period, Billie Piper stars as Betty, a young wife and mother who reluctantly falls passionately and hopelessly in love with her charismatic Polish neighbour, Alex Crazenovski, played by Theo James (new Woody Allen film, as yet untitled).
But little does Betty know that some 30 years later, in Eighties Thatcherite Britain, her affair will implode on her beloved son Mark's wedding day.

Mark as an adult is played by Andrew Lee Potts (Primeval).

Sue Johnston (The Turn Of The Screw, Waking The Dead), stars as Betty in the Eighties opposite Alun Armstrong (New Tricks) who plays her devoted, if dull, husband, Donald. 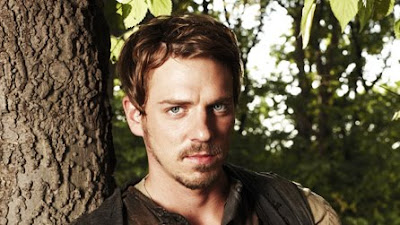 The younger Donald is played by Alun Armstrong's real-life son Joe Armstrong (on the left, Allan-a-Dale in Robin Hood), in his first on-screen appearance with his father.

Frances Barber (The Street) plays Betty's sister, Margaret, who is always there for her sibling through thick and thin, and in her younger years aided and abetted Betty's affair. Rachel Leskovac (Coronation Street, Holby City) plays Margaret in the Fifties. 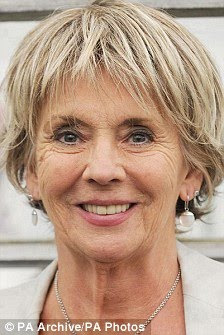 Kay Mellor, one of Britain's leading TV writers, has penned numerous hit dramas including The Chase, Fat Friends, Playing The Field and the seminal Band Of Gold. She was awarded on OBE in the Queen's Birthday Honours list in June 2009.

Kay Mellor says: "Mum and I were washing-up one day when she confided in me she'd had an affair before I was born, when she and my dad lived in the poorer area of Leeds. The affair ended when her lover was suddenly killed. I realised she'd kept this secret for 30 years and that she still loved this man. Years later, my younger brother was getting married and I saw that same pain on her face. I knew these two periods of mum's life were intrinsically linked and I was compelled to write the play A Passionate Woman for the West Yorkshire Playhouse. (...) Three years ago mum died and I suppose the film is a way of bringing her back for me."
Polly Hill, BBC Commissioning Editor, Independent drama, England, adds:
"We are delighted that the script has attracted such a wonderful cast led by Billie Piper and Sue Johnston and we are sure it will prove a real treat for the audience."

Sounds like an interesting movie. I love the movies BBC produces.

Regarding your previous post. I am looking forward to reading the Jane Austin Monster books. Sounds like it would be a hoot:)

@Vickie
It seems a poignant beautiful story developing from the 50s to nowadays.
As to my previous post,as I wrote, I've never read any of those novels you mention but they might be fun. I've just shared the topics I've been working on with my students these days: the rise of the Gothic novel and Austen's attempt at mocking them. Thanks for dropping by and commenting!

Thanks for the info, MG! Although I live in the UK I get to know about these new British TV dramas from you!!!!!!!!! Ciao. A.

@lunarossa
It is because I'd love to live there and try to know as much as I can about my favourite foreign country! Then I love period drama and think BBC is very good at it. Ciao!

BBC rocks! Thanks for sharing. I have an award for you: http://gofita.blogspot.com/2009/10/honest-scrap-award-and-others.html

@hmsgofita
THANK YOU!!! It's such a pleasure to have so kind blogger mates! Have a wonderful evening!

@Anonymous
I saw "Between the Sheets" too, for ...a "certain actor's presence" in it and I perfectly remember Alun but not Joe Armstrong ! I have to re-watch it! Probably BBC informers are not very well informed about ITV programmes ;-)
Thank you for your contribution.

My pet hate is billie piper! : ( dunno why to be honest.

I think the new BBC Emma has started I'm going to catch it on BBC website iplayer now.

@London Belle
I don't particularly like BP but I don't hate her either. As for BBC new Emma, yes! It started on Sunday. Let me know what you think about it!

Joe had a small role in "Between The Sheets".
I have seen him in Folye's War,Midsummer Murders etc. When you see Alun and Joe in the roles they are playing you can see Joe's father at times. Mannersim and the such.

hello guys, I like your blog is very interesting your subject .... I would like to receive information about this!