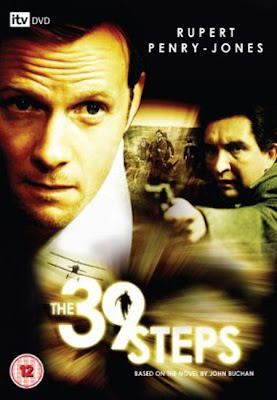 I got this DVD a couple of months ago but, as usual, I had to wait for some spare time to watch it. THE 39 STEPS starring Rupert Penry-Jones (one of my favourite SPOOKS and, definitely, my favourite Captain Wentworth) and Lydia Leonard was broadcast at Christmas time 2008 on BBC but, of course, living in Italy, I had to wait for the DVD to be released. I ordered it from Amazon UK though I read no positive review on the net (newspapers and magazines on line). They all compared this TV movie either to John Cuchan’s novel, on which it is based, or to Hitchcock’s 1935 version. After watching it just yesterday night, I think it is a pretty entertaining comedy. It seems more a parody of serious espionage films and, just for this reason, I find it really enjoyable. Maybe it is because I haven’t read Cuchan’s novel nor seen 1935 version by Hitchcock. Last but not least, Rupert Penry-Jones is dashing, adorable, as Richard Hannay! 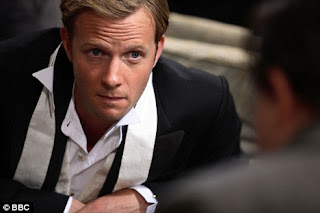 The story starts in London, 1914. Richard Hannay, back from Africa, finds the city “cliquey, claustrophobic and class-bound”. He is extremely bored and spends the nights drinking at clubs. His life is unexpectedly changed into a mystery , a real exciting thriller, when one of his neighbours, Mr Scudder, seeks refuge in his flat claiming he is a British secret agent chased by German spies. Mr Scudder is discovered and murdered in Richard’s flat and he finds himself suddenly accused of being a killer and involved in a deadly conspiracy which not only threatens his life but the safety of the nation.
Forced into this bizarre turn of events, he escapes from London to Scotland hoping to uncover a German espionage ring. 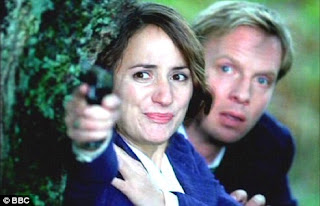 As the police and the spies close in on him, he struggles to decode Scudder's secret notebook. Reluctantly he joins forces with a feisty suffragette, Victoria Sinclair (a character I particularly liked)

Victoria and Hannay don't hit it off, but they find themselves increasingly reliant on each other as they race to unmask a traitor and save Great Britain from invasion.

What I especially love in this movie is that it is thrilling, with quick turns, amusing, with spectacular natural settings (Scotland!) beautiful costumes/houses/cars, and … some very romantic scenes.

Here is my favourite one…

HEHEHEH I JUST watched this on Tuesday! I'd not been able to see it before then either. I thought it was very cute! RPJ is a cutey as well and I felt, to spite his chauvinistic ways, was rather charming. My favorite Wentworth will always be Ciaran Hinds (he's one of my fav actors) though. He was good on spooks, I like RA the best of course and I must say Matthew MacFadYUM is my second favorite.. he and my husband have a few facial similarities that win me over every time!

Hi MG, Lots of problems with my Internet connection again so I'm on/off it regularly! A nightmare! Loved the 39 steps with Rupert Penry-Jones. I absolutely adore him! Have you seen Whitechapel? He's so fantastic in it! Chilling but excellent! All the best. Ciao. A.

@Jenny Kerr
So! That's telepathy... As for SPOOKS, of course, MY FAVOURITE MI5 agent is Lucas North, then "ex equo" Tom Quinn and Adam Carter!
@lunarossa
Hi, A. While watching this movie, I thought of you 'cause you told me about your liking RPJ more than RA! Oh... I can't forgive you that... Joking...And yes! I've got a copy of Whitechapel now but ... I just had a look ... I saw ... a lot of blood...hope my stomach will bear that. I want to see it soon. You'll know it as soon as I do. If your Internet connection lets you...Ciao!

I saw this one a couple of months ago and I loved it! Rupert Penry-Jones is my favourite Captain Wentworth...Persuasion...aaah what false hopes you give me!

@Mona
Hi! Thanks for dropping by and commenting.

Rumour has it that Rupert Penry-Jones is going to play Shardlake in a televised version of the C J Sansom novels. Have you read them?

@Table Talk
I'm afraid I haven't , Ann. Do you think I might like them? I'll search the Net for more information. Thanks for your reading tip and ... rumours about RPJ future work.

Maria Grazia!!! Did you see my post about the winner of Cleopatra's Daughter...??

@Ms Lucy
Ta Taaan! I am the winner! Oh Lucy, Thanks I'm so happy! It's my first time. I've never won anything in my life! THANK YOU!!!

Thanks Maria - I must find a copy of this. I adore Rupert Penry-Jones and agree that he makes a dashing Captain Wentworth. (I haven't seen any other adaptations of Persuasion on TV ... are there any?). RPJ has recently done Whitechapel which looks interesting as well.

I've got a copy of Whitechapel. It's on my VERY long list of things to watch. As for Persuasion, there two old BBC adaptations, which I haven't seen either, 1971 and 1995.Congrat for your last post. I love it.