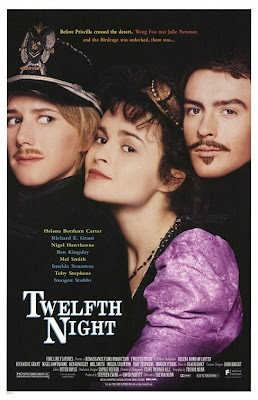 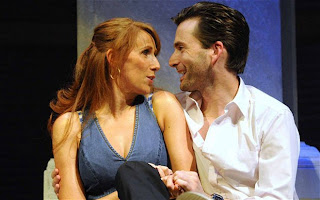 Watching adaptations of classics is one of my favourite pastimes and I'm glad  I could recently add  two titles to my "watched" list: the film Twelfth Night (1996) and a recent London stage version of Much Ado About Nothing (2011). Two of Shakespeare's greatest achievements in comedy, these are two of the plays I've seen  performed on a stage more often (HERE and HERE), with The Taming of the Shrew and The Merry Wives of Windsor, and which I most appreciate for different reasons with As you like it. In both comedies we can recognize different takes on love by Shakespeare.

The 1996 film version of Twelfth Night, directed by Trevor Nunn with  a remarkable cast (Imogen Stubbs, Elena Bonham -Carter, Ben Kingsley, Toby Stephens, Imelda Staunton, Richard E. Grant) is Shakespeare's comedy of gender confusion, in which a girl disguises herself as a man to be near the count she adores, only to be pursued by the woman he loves.
Romantic love is the main focus and, despite the fact that the play offers a happy ending, in which the various lovers find one another and achieve wedded bliss, Shakespeare shows that love can cause pain. The tone, is often melodramatic  and  mainly melancholic. I had never seen this film version before and I appreciated it quite a lot. Watch this clip with Toby Stephens as Orsino, Imogen Stubbs as Viola/Cesario and Ben Kingsley as Feste.

Much Ado About Nothing was instead a recent record breaking London West End production starring    the irresistible Doctor Who couple, Tennant and Tate, as the disputatious Shakespearean lovers, Benedick and Beatrice, the most sparkling, unsentimental couple of lovers ever. Purists might turn their noses up at this production which is set in the 1980s in Gibraltar but it has a freshness and wit  that is often irresistible, as irresistible as the chemistry between the two protagonists.

We are given different views of the same reality, love, views which we might call romantic (the plot Hero-Claudio) and realistic (Beatrice-Benedick). The first view is conveyed by Shakespeare through a conventional tragi-comedy story , while the second view is connected to the comedy of wit.

This adaptation brilliantly works on Shakespeare's exploration of the nature and the limitations of love, with a sparkling picture  of the young, their games and jokes, easy enthusiasm and excesses. What Shakespeare hinted at in the background, here comes to the foreground thanks to the 1980s setting, the huge amount of drinking and smoking, the music and the intelligent direction of Josie Rourke.

Digital Theatre is the site I've recently discovered which gave me the possibility to download and watch on my computer this amazing staging of Much Ado About Nothing as if I were in London among the much amused audience in that theatre.How much we laughed! Digital Theatre is an incredible source of emotions, you can watch plays online or buy them and keep it forever in your computer to re-watch them whenever you wish.

Posted by Maria Grazia at Tuesday, January 31, 2012
Email ThisBlogThis!Share to TwitterShare to FacebookShare to Pinterest
Labels: At the theatre, Costume movies, David Tennant

That production of Twelth Night is (I believe) the only Helena Bonham-Carter movie I have not seen - must do so soon. I think it is one of the fabulous things about Shakespeare that his works are so easily adapted to any era, as they always have been, so Much Ado About Nothing set in the 80's seems very natural to me. I have not been so fortunate as to see so many of his comedies as you have. It seems I have almost only seen his tragedies live, particularly Hamlet, the best version of which was set in the 40's and cast Hamlet as a junkie. It was fabulous.

You know Maria, you are the number one reason why my to-be-watched list of films is as long as it is. So much to see and so little time!

Hold on @Alexa. You'll catch up with all the things you are taking notes of, I'm sure. You'll see them with little E. when she grows up :D
As for me, I often steal time from sleep, to do all the things I must or want to do. And this is not healthy, believe me. However, as you know, my watching period film, series or adptation of classics is directly proportional to my ironing pile. Big hug and thanks for dropping by and commenting.