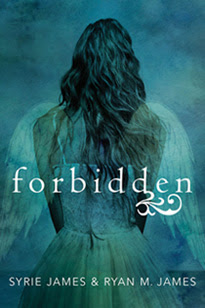 Today is release day for FORBIDDEN! I wish Syrie James and her son Ryan great success. I can't wait to get my review copy and read it. I'm sure I'll like it at least as much as Nocturne, which I loved, and not less than The Lost Memoirs of Jane Austen, which was lovely.
Just on the day of its release, a lucky reader of FLY HIGH! is going to get her brand new copy of Forbidden after leaving a comment to Syrie and Ryan's guestpost. Congratulations to ...

Claire Brennan has spent her entire life wondering who her father is, and why her paranoid, "hippie" mom insists on moving every year or two. Who—or what—are they running from? Desperate to stay put at the high school she loves, Claire hides the fact that she's started getting psychic visions that seem to predict the future—especially when the visions take a darker turn, warning Claire that her own life is in danger.
Alec MacKenzie is a handsome, angelic watcher with incredible powers, who chose Emerson Academy as the ideal hiding place where he could escape his exhausting duties and just be normal for once. He hadn't planned on falling deeply in love with Claire, whose secret heritage makes their relationship—and her very existence—forbidden.
When the reason behind Claire's unusual powers is revealed and the threat to her life becomes clear, how much will they risk to stay together? How far will Alec go to protect her.

To find out more about Forbidden, visit its website or Syrie's website, SyrieJames.com. You can also connect with Syrie and Ryan at Forbidden's Facebook page or follow them on Twitter -  Ryan @RMJames and Syrie  @SyrieJames
Posted by Maria Grazia at Tuesday, January 24, 2012
Email ThisBlogThis!Share to TwitterShare to FacebookShare to Pinterest
Labels: Books, Giveaways