ROME. THE PAINTING OF AN EMPIRE.

It was an exciting school day yesterday for students and teachers. We were in Rome to visit an Art Exhibition at the Scuderie del Quirinale (Quirinale = The President of the Italian Republic’s official residence). One of my classes study Latin, Greek and Art as their main subjects so this exhibition was a “must” to them and I was glad to join them in this trip.

I have recently read Michelle Moran’s Cleopatra’s Daughter, so when unexpectedly we were told that the beautiful wall with frescoes we were admiring was taken from Julia’s and Marcellus’s ( two of the protagonists of that novel and historical figures, of course) bedroom, I felt so involved and nearly moved! It was as if Ancient Rome’s everyday life was there under our eyes and those portraits … They were so impressive, so realistic. 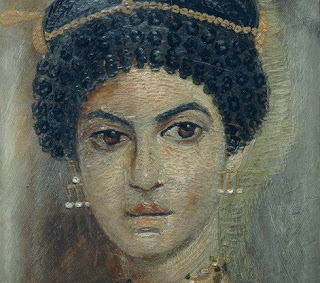 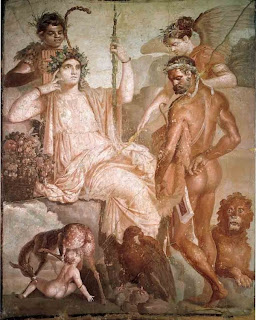 “Rome. The painting of an Empire” presents the figurative representation of a crucial period in Roman History, from 1st century b.C. to the 5th A.D. Six centuries which saw the Roman Empire rise and develop, from the advent of Julius Caesar in 49 b.C. to the extraordinary consolidation of advanced power structures that could hold such a vast territory together. In this period of time imperialistic expansion gave rise to a cultural ferment of rare intensity, to such a degree that the art of imperial Rome may be considered a source of inspiration for cultural and aesthetic canons that left their mark on the whole of subsequent western painting and art. Those images reveal aspects of the collective imagination and they are correlated with the more general system of representation of a concrete, practical-minded society that was at the basis of all subsequent civilizations. The works in the exhibition show that Roman painting was not simply a derivation and passive heir of classical Greek heritage. The about 100 works organized in 5 sections are all loan works from the world’s most important archaelogical sites and museums, including the Louvre in Paris, the British museum in London, the archaeological museums of Munich, Frankfurt and Zurich, the Pompei excavations, the National museum of Rome, the Vatican museum, the Naples and the Capitoline Museums. The spectacular context has been devised and designed by the great theatre director Luca Ronconi. 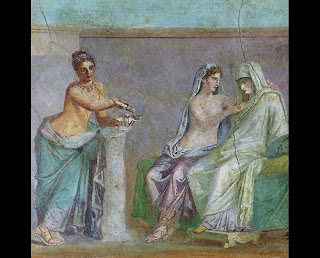 This one on the left is a detail from the fresco you can see at the top of this post. It is the one I was mostly impressed by.

The lady in white sitting with such a sad, worried face is a young just married bride (at that time girls were given in marriage at 12-13 by their fathers) and the lady next to her is trying to convince her that "what " was expecting her was not so terrible... Poor girl. I hoped her just married groom was not a fat ,  bald , old Senator!

The exhibition will be opened until 17 January 2010 at the Scuderie del Quirinale, Rome.
Posted by Maria Grazia at Thursday, December 17, 2009
Email ThisBlogThis!Share to TwitterShare to FacebookShare to Pinterest
Labels: Ancient Rome, Art, Exhibitions

You are so lucky! I wish I could be there to see it all live!

Wow! What a neat trip you got to take! FYI, I talked about your web site on my blog and referred my readers here. Hope you don't mind! I just love all this stuff!

Here's the link to my blog if you want to see what I wrote: http://m-gray.blogspot.com

It is amazing to stand in front of a fresco that once decorated the walls of Julia and Marcellus' home! I am rather jealous you live in Italy - I studied in Florence in the late 90's but haven't been back since. The most amazing thing about Italy for me, other than the food, was being able to view objects, like these frescoes, which draw you so intimately back into the past. Especially when dealing with the Roman imperial family, whose members remain so well known, it can feel like they are just in front of you, rather than 2000 years dead. Yes, I'm that strange American who wondered around Pompeii weeping. Never have I been anywhere where the past feels as vibrant and immediate as it does in Italy. This post has thrown me into a fit of wander lust.

Oh, to have such access to history at your fingertips! SO JEALOUS! Actually, I love that you get to involve your students in such beautiful pieces of history, and then to find yourself so connected thanks to your reading. What a great connection. Thanks for sharing!