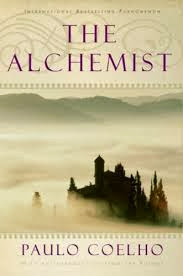 O Alquimista, the original Portuguese version of the now popular book, brought its share of despair to its creator, Paulo Coelho. Though published, and sold in some measure, the publisher had told Coelho that it was never really going to be big. A disappointed Coelho had left the city and gone away for a while, before he decided that he believed in the book and had to make it happen!

He was back with a bang, and was working hard - knocking doors to make the magic happen. This, in a sense, can be called his Personal Legend, also the core theme of the book.

The Personal Legend is an interesting idea. Each individual has a different legend – a unique goal to achieve, a unique desire to fulfill. You have to believe in your personal legend and work to make it happen. And when you do that, magically, things begin to happen and they move you forward on your path. According to the author, the universe conspires to make it happen for you.

I personally, have one deep reservation about the personal legend theory. What if your desire or goal is to destroy the world? Will the stars favour you even then? What if your desire clashes with the desires of others? What will happen? Whom will the universe favour? For whom will the universe conspire to make it happen? And finally, is there nothing bigger than a personal desire or goal? The book does not answer these questions.

That said, the book is an engaging read and has hooked millions, as is borne out by the sales. The author employs a simple parable style, which resonates with the kind of folklore most of us have grown up with. We all love to hear stories about people- where do they come from, where are they headed, are they good? What obstacles do they face, how do they overcome them and move on? We may not realize it, but in our heads we quickly identify the hero and the villain of the story – we judge almost unconsciously. A savvy author takes this into account. Coelho has also done this successfully, because the readers love Santiago and are practically willing the universe to conspire to give him what he desires.

Santiago’s tale is straight and simple. He is at the seminary in Andalusia, training in religious studies. He dreams a dream several times, that of finding treasure in the Egyptian pyramids. His responsive mind simply cannot ignore this dream and with his father’s permission, he sets out on what can only be called a pilgrimage – a pilgrimage of self-discovery.  He decides to tend sheep and travel the world.

The story unfolds in true Chaucerian style (I am not sure if Coelho has read the Canterbury Tales. But I reiterate a point I made earlier. Folklore across the world is quite similar in their use of metaphors for life’s obstacles and spiritual journeys). He meets a number of interesting and colourful characters who guide, and sometimes misguide, him into reaching his goal. His quest, the journey, the goal – all combine to form his personal legend.

He meets a king, a gypsy, an Englishman, a beautiful girl, and eventually an alchemist. Together, the two of them meet a Coptic monk, hugely orthodox and therefore skeptical. He brings out a pan of lead, which the alchemist turns into gold. The monk then does not want to accept his share. What purpose does this interaction serve? I think Coelho intends for the reader to arrive at their own conclusions.

The author employs the classical third person narrative, and mostly refers to Santiago as ‘the boy’; the alchemist is ‘the alchemist’ and so on. The one advantage of the omniscient narrator is that the reader becomes an omniscient reader. That gives him a sense of involvement in the proceedings, and the confidence in the powers of his prayers for his character.

I also see echoes of the iconic Christian allegory, ‘The Pilgrim’s Progress’, insofar as the effect of the work. Both works universalize situations. The protagonist in The Pilgrim’s Progress is called ‘Christian’ and other people and places are personifications of human traits and situations (Wanton is a temptress, the Slough of Despond is a place). Coelho’s work has not really personified, but in a way, depersonalized, so that it reads like everyman’s (or every person’s story).

Coelho’s Alchemist responds to most people who believe in the callings of the heart. Here is an excerpt -

“Why do we have to listen to our hearts?" the boy asked, when they had made camp that day.
"Because, wherever your heart is, that is where you'll find your treasure."
"But my heart is agitated," the boy said. "It has its dreams, it gets emotional, and it's become passionate over a woman of the desert. It asks things of me, and it keeps me from sleeping many nights, when I'm thinking about her."
"Well, that's good. Your heart is alive. Keep listening to what it has to say."

A book is never complete without the response of the reader. Some will feel and react to the emotional pull of the situations and the confused and anguished boy’s cries. Others, like me, will see echoes of some other wonderful works of literature and will respond from that point of view. Still others may just pick up the lesson that they have to learn, with no opinion about the form, content or style of the book.

I'm Ramya Raju, a freelance writer/web designer from India. I write on varied topics like English Courses, SEO, Web Design, Mobile, Marketing etc., I have an experience of about 8 years in content writing and have worked for top blogs and websites. I'm generally an extrovert; I like photography, anthropology and traveling to different countries to learn the culture and living of the local inhabitants.