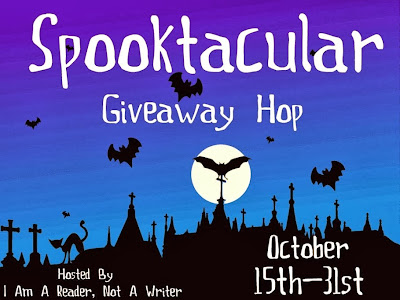 Is there anything most appropriate than this Spooktacular Hop to accompany us straight to the scariest and most exciting night of the year? Halloween is so close and we must get into the right mood to welcome it again.  Thanks to Kathy at I Am a Reader not a Writer for organizing such a huge spooky event and happy hop to all of you.

Here are the prizes I've chosen for you, dearest readers of FLY HIGH! I'm giving away a kindle copy of  book 1 +  book 2  in the All Souls trilogy,  Discovery of Witches and Shadow of Night by Deborah Harkness. I'm reading and greatly enjoying book 1 just these days and I highly recommend it!

1. In a sparkling debut, A Discovery of Witches became the "it" book of early 2011, bringing Deborah Harkness into the spotlight and galvanizing fans around the world. In this tale of passion and obsession, Diana Bishop, a young scholar and the descendant of witches, discovers a long-lost and enchanted alchemical manuscript deep in Oxford's Bodleian Library. Its reappearance summons a fantastical underworld, which she navigates with her leading man, vampire geneticist Matthew Clairmont. Harkness has created a universe to rival those of Anne Rice, Diana Gabaldon, and Elizabeth Kostova, and she adds a scholar's depth to this riveting story of magic and suspense. And the story continues in Book Two, Shadow of Night.

2. J. K. Rowling, Stephenie Meyer, Anne Rice—only a few writers capture the imagination the way that Deborah Harkness has done with books one and two of her New York Times–bestselling All Souls trilogy. A Discovery of Witches introduced reluctant witch Diana Bishop, vampire geneticist Matthew Clairmont, and the battle for a lost, enchanted manuscript known asAshmole 782.
Harkness’s much-anticipated sequel, Shadow of Night, picks up from A Discovery of Witches’ cliffhanger ending. Diana and Matthew time-travel to Elizabethan London and are plunged into a world of spies, magic, and a coterie of Matthew’s old friends, the School of Night. As the search for Ashmole 782 deepens and Diana searches for a witch to tutor her in magic, the net of Matthew’s past tightens around them, and they embark on a very different—and vastly more dangerous—journey.

What do you have to do to win these two wonderful e-books? Just take as many chances as you can in the rafflecopter form below. Oh! And don't forget to tell us what fantasy creature you would like to be or feel more like to in the comments! A fairy, a vampire, a werewolf, a witch, a shadowhunter, an elf, ...? This giveaway is open internationally and ends on November 1st.

Remember this is a hop so check as many blogs as you can from the list below. Good luck and happy Halloween!

Emily @ Falling For YA said...

I think if I would be a pretty good vampire =P

I would luv to be a tall and immortal warrior, aka AN ELF <3

It's a toss up between a dragon and a mermaid. Thanks for the giveaway opportunity.

I would want to be either a vampire or a witch. Not sure why I just really like most stories with them!

I am so thrilled to be a part of this book giveaway extravaganza with so many great bloggers! Find me at http://wp.me/p3GCnv-1MC

My favorite supernatural characters are vampires, werewolves, and fairies. They are just fun to read about.

Thank you so much for the giveaway! I'd love the chance to win, so fingers crossed. :-)

At Armitage4Clairmont we liken ourselves to Daemons...but of course, our other favorite supernatural characters are vampires and witches!

Thanks for giving others the opportunity to read the All Souls Trilogy!

I'd love to be a shapeshifter. I think it'd be fun to run wild!

Definitely a shapeshifter! Thanks for the giveaway!

I have to pick vampire, if only because I am curious what the world will be like a hundred years from now :)

I've always liked vampires, but f I actually had to be something, it'd probably be a Shadowhunter. Or maybe some sort of shapeshifter. I don't think I'd want to be a vampire.

A vampire, they have always been my favorite.
Thanks for the chance to win!

My favorite paranormal beings are vampires, but I'd like to be a magical being myself, maybe an elf or a witch.

I would like to be a vampire. I could get around at night when there is less traffic.

I'd love to be a witch (with the power to turn into an animal) that was turned into a vampire. That's going to be awesome! Thanks for the great giveaway!

Shapeshifter. It would be cool to be able to change into a big cat, wolf or dragon.

I've always wanted to be a witch or female wizard! I think it's for the various spells and charms I could learn!
falses1gns(at)gmail(dot)com

I'd want to be a fairy. I love all of the different takes I've seen on fairies, so I think there's a lot of variety in the creature :)

Psychics. I'd like to read how authors paint their lives and their abilities. The possibilities are endless!

My favorite mythical creature or fairy tale animal is the Elf. I think I really grew to love them because of The Lord of the Rings and Eragon.

I love vampires, but I don't think I'd want to be one. I'm not sure what I'd like to be...maybe a witch.

I love shifters in paranormal books, but I don't know if I'd like to be one myself :D

I like vampires because they are the most human!
Thanks for the giveaway!

I'd want to be a half-goddess or something similar :D

A witch probably, anything that uses magic is awesome. Thanks for the giveaway!

I'd like to be a vampire because I love their abilities. Thank you for the giveaway :)

Probably a shadowhunter cuz then at least then i'd still be human, just Superhuman!Stellar giveaway!

If you have time, check mine out too!I'm giving away some amazing books as well as an amazon giftcard! Libertad & Guinevere @ Twinja Book Reviews

I'd rather be a witch. Spells are powerful! You can transform yourself with it, maybe even prolong your life if you want.

Elves, Pixies, and Fairies are adorable!!! These would be my choice.

I love werewolves/ wolf shifters. I wouldn't mind being one.

Well, my favorite creatures to read about are probably vampires (non-sparkly ones only). However, were I to be a paranormal creature, I'd probably choose to be a faerie or an elf--and not the sickeningly sweet kind, either. The deadly and dangerous kind.