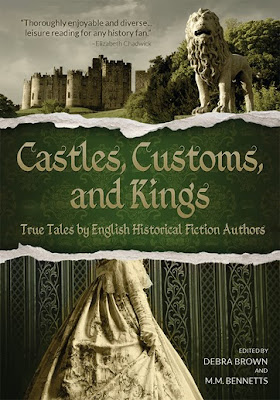 To be honest, the runaway success of the English Historical Fiction Authors has taken us all by surprise.
It started small, you know.  Tiny.
It was the brainchild of Debra Brown, who, after writing her first novel set in the Victorian era and needing a 'web presence' set up this daily blog in which historical novelists wrote short essays about the bits and bobs of English history which they'd learned in the course of their research for their own novels.

It was a great idea.  Great for everyone involved.
Great for the authors--because let's face it, we do enormous amounts of research, studying ancient texts or period newspapers, visiting sites for our novels in the torrential rain (I know--I was the driver that day and it was POURING!), eating things that fortunately most cookbooks omit these days, learning skills from the past, and reading thousands of books, all so that we can put our readers 'in the room' of whatever era we're writing about.
But, to tell the truth, with all that, sometimes we only use 1% of what we've uncovered or studied in our books.  Thus, for us, this brilliant idea gave us the opportunity to showcase some of what we've picked up along the way--because let's face it, as authors and researchers, we love history.  Adore it.

And wonderfully, magically, terrifically, readers felt the same.
Not everyone--just because they love the White Queen or Sense & Sensibility--wants to gain their PhD in history and sit about reading tomes about the Apprentice Act of 1812 (I might do, but we'll leave that...)  But that doesn't mean they don't love history and wish they could indulge in their fascination with the people and events and places of the past.  And I have to say it, the English Historical Fiction Authors daily blog has filled this niche.
Filled it and then some for nearly a quarter of a million readers...

So maybe it wasn't a complete surprise---given the blog's popularity with contributors and readers alike--that when one of the authors considered we were coming up to our second anniversary she suggested we should put out an anthology of the 'best of' from the first years' collection of blogs, everyone thought it was a grand idea.
And that's what Castles, Customs, and Kings--True Tales by English Historical Fiction Authors is.   All newly edited, neatly packaged up and beautifully presented in one delicious single volume, the book is a compendium of our first year's work, our very best.  From the savagery of the ancient Britons to what William the Conqueror was up to before he came with his army in 1066, from mediaeval feasting and farming to 17th century spies to Regency gardens and theatre (an evening's performance generally lasted some six hours--and the seats weren't padded), Castles, Customs, and Kings brings it all to life.
And all of it written by some of the finest and most popular authors in the field of historical fiction today--Barbara Kyle, Sandra Byrd, Nancy Bilyeau, Lucinda Brant, Gillian Bagwell...and a host of others, 55 authors in total.

So whether you're waiting for the next episode of Downton Abbey or lamenting the finish of the White Queen or impatiently pondering the upcoming BBC dramatisation of Death Comes to Pemberly,  Castles, Customs, and Kings has something for you--backstories to bring familiar historical figures to life, details of daily life like when did envelopes start being used or how did they clean those muslin dresses in the Regency or what was it like to be a lady-in-waiting to Elizabeth I and what happened to all those poor unfortunate women turfed out of their convent homes by the Dissolution of the Monasteries.  It's all here, under one roof!
So, if you want my opinion, this book is the BEST present ever.  Either for yourself, or for someone you know who has a fondness for historical detail and delight.
I'll be honest, I love it to bits.  I've learned so much, encountered so many other epochs than the one I specialised in, and truly, I'm so grateful to have been a part of bringing this lovely book to you, the reader.
And if readers enjoy it even half as much as I have enjoyed editing it, they'll have the most fun and fascinating time ever.
Enjoy!
M. M. Bennetts

A compilation of essays from the English Historical Fiction Authors blog, this book provides a wealth of historical information from Roman Britain to early twentieth century England. Over fifty different authors share hundreds of real life stories and tantalizing tidbits discovered while doing research for their own historical novels.
From Queen Boadicea's revolt to Tudor ladies-in-waiting, from Regency dining and dress to Victorian crime and technology, immerse yourself in the lore of Great Britain. Read the history behind the fiction and discover the true tales surrounding England's castles, customs, and kings.

Thanks, Maria, for having us here on your blog! Wishing everyone a good-reading autumn and winter.

You're welcome, Debra. Good luck to you and M.M. with this beautiful book!

Wow, sounds fascinating. What a great idea! This is going on my Christmas list. :)