ON THE ROAD AGAIN - KEROUAC, THE BEATS, TRANSGRESSION AND REBELLION

For once I didn't want to open the new school year talking about Early Romantic Poetry or reading passages from Gothic novels, Jane Austen and Sir Walter Scott. Students in their last year at High School are supposed to read authors from the 19th and 20th century in English Literature and even authors from Anglo-American literature can be read. What usually happens is that following a chronological order, we manage to study many texts from the 19th century and only a few the the 20th, and the last ones in a hurry, when the final exams are approaching. First of all, my syllabus this year - since I can pick up which authors, themes and texts to include -   doesn't follow a chronological order, then I've also divided authors and texts according to short theme modules.

The first theme I wanted to discuss with my oldest students (18-19 years old) is Rebellious Youth,  starting with J.D. Salinger's The Catcher in the Rye, then reading pages from Jack Kerouac's On The Road as well as a poem by Sylvia Plath, Daddy,  and the conclusion of this set of lessons will be a movie my students haven't seen so far: Dead Poets Society.

At first our lessons focused on what being a teenager - a young adult - means in the students' personal experience.  Then we moved on to reading the literary texts, we analysed them and also discussed the social/historical context in which they were written.
It's been quite an interesting start so I'd like to go on with what I've planned and hope my students will not be too confused by our moving back and forth in time following the themes I've chosen for them.

What has been interesting is that the restlessness, the wish for adventures and transgression, the tendency to break rules and to rebel to conventions, the appeal to what is extreme and prohibited are all elements which my students have been able to recognize as part of their own nature. They have been personally involved in the reflections on the texts and have contributed  interesting comments. Now I'm really curious to see/hear what their reactions will be watching the movie I've chosen to show them.

But am I surprised for their response? No, not at all actually, because are the rebellion of young Holden Caufield to the phoniness of the adult world,  the beat generation's wish for freedom and transgression or Sylvia Plath's urge to kill her father's "ghost" something these young people living nowadays may perceive as incomprehensible and distant? Or is it instead something they can easily relate to?
Apparently, though some of them don't agree with the extremity of certain choices, the majority of them recognize and appreciate  the sensitivity and poetical quality of  the passages we read and are convinced those fictional characters - as well as their authors - are not so different from them. They share the same will to change a world they feel as unjust and unfair, the sensation of  not being listened to  or being misanderstood, the impulsivity in making decisions, the fascination for adventure, transgression and the prohibited.

What I think but haven't told them - not yet at least - is that nowadays the real transgression would be ... to conform. What do I mean? I mean,  there is so much freedom in YA people's lives! So many of them drink alcohol, use drugs and have early sexual experiences that contrarily to what happened to their grandparents, their dissent should be expressed through a prim and proper behaviour.
"Do you want to differ and be against ? Do not smoke, do not drink alcohol, do not have early sexual experience, do not use drugs".
To be like that would require courage, the courage to stand apart and be different,  which usually  turns individuals into social outcasts.
Kerouac and his friends - Ginsberg and Cassady for instance - Sylvia Plath or young Holden Caufield (though only a fictional character)  were brave enough to dissent and be a minority. They were ostracized, rejected and despised for being different, rebellious and were even considered dangerous.
They contributed to change the world though, they did something extraordinary. Our young people have to be grateful to them for the freedom and the consideration they are granted by the adults at present. They may think they aren't granted any or not that much,  but they must be certain that it is much, much more than what the young generations of the past received and were allowed to experience. 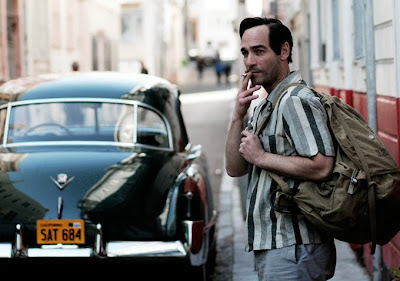 Apparently there is much interest in those rebellious youth and in those times these days. For example,in 2012 we had an adaptation of On the Road, which I still haven't seen, and there are two new films about the Beat Generation coming out in the theaters soon. The first one is "Kill Your Darlings" starring Daniel Radcliffe as young Allen Ginsberg  which was presented at The Toronto Festival 2013.
The second one is "Big Sur" , with Jean-Marc Barr as the protagonist,  which focuses on a moment in Kerouac’s life when, overwhelmed by the success of his  On the Road and struggling to battle inner demons, he seeks respite in three brief sojourns to a cabin in the small, coastal California town of Big Sur. Directed by Michael Polish, the  film is said to be at once a poetic meditation and a love-letter to the work of an author who defined the Beat Generation.

What do I hope my students get from our discussions/reflections about those rebellious young people and about themselves? I'd love some of them,  at least,  will treasure Holden Caufield's lesson, his dream to become a "catcher  in the rye", which means an adult  who will take care of future children.