AT THE CINEMA - YOUNG BEAUTIFUL CREATURES LONGING TO BE ... INFINITE 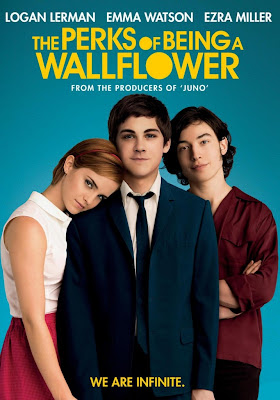 Aging is not always easy. Growing up can, instead,  be hard but exciting and thrilling at the same time. Young people tend to be  full of hope, dreams and possibility.  That's what youth is made of. That rubbish idea  of  "feeling young inside" can't really work nor help when all that is actually  just part of your memories.  Past. Over.
It must sound like I'm not in an enthusiastic mood today, but  that is not the case. I feel grateful I can age surrounded by young people: my sons, my nieces and nephews, my young cousins,  my students, ex-students sticking around. I feel the gap but not suffer from it. I can smell dreams, energy, future and ... find some hope.
I happen to like young people pretty much and I'm really curious about what they like, think and long for. They are not simply my task, not only my job. They are my life,  people I deeply care for.  I don't know if this is why I often watch films or read books they seem to be fond of or that tell  their stories. Stories of kids or teenagers.  I do that. Quite often.

For instance, I've seen two movies targeting a teenage audience these days. Both have just been released here in Italy, both are adaptations of successful books: Beautiful Creatures (La sedicesima luna) and Noi siamo infinito (The Perks of Being a Wallflower). 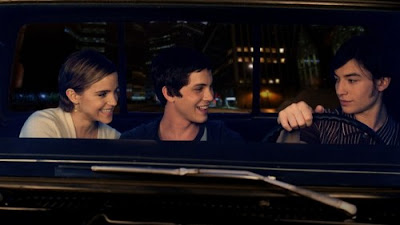 Let's start from the second one which reminds me so much of 20th century novels like J.D.  Salinger's "The Catcher in the Rye" or Sylvia Plath's  "The Bell Jar". "Noi siamo infinito" (The Perks of Being a Wallflower)  is definitely touching and thought-provoking, though it starts unsurprisingly like many other coming-of-age tales: Charlie (Logan Lerman,  seen  in Percy Jackson  and The Three Musketeers) is a very shy,  introverted ,  melancholic freshman terrorized by his new school, new mates, new teachers. Making friends has always been very difficult to him (he is a wallpaper watching life from aside)  and he is haunted by very sad memories from his past (which becomes even hallucinations from time to time) .  He will find friends though, a few of those damaged souls nobody wants as mates,  usually bullied or emarginated. As the story flows, scene after scene, gifting the watcher  with tender moments, memorable quotes, stunning scenes and   final surprising twist,  we witness Charlie grow  till the moment he finally feels himself infinite.   The film is an adaptation of 1999 epistolary novel by  Stephen Chbosky. Lerman's excellent performance is supported by  brilliant Emma Watson as Sam and Ezra Miller as Patrick. I loved it and highly recommend it. Beautiful Creatures (official site) is the first installment in a trilogy,  a popular YA saga by  Kami Garcia and Margaret Stohl, which seems to propose the hugely successful model of supernatural love between a human and a being with powers, who are doomed to face unimaginable predicaments.  Twilight-style,  to make it clear. This time the story is told from a male perspective, that of Ethan Wate ( Alden Ehrenreich),  the young hero who will fall in love with a beautiful, apparently innocent teenage witch, Lena Duchannes (Alice Englert) and who will be ready to defy obscure powers and even a mortal curse to save her from the grasp of the dark forces. He will have to cope with her bizarre, dangerous uncle Macon Ravenwood (Jeremy Irons) and her wicked, heartless mother Sarafine (Emma Thompson). Impressive soundtrack, time travelling, romance, young love, old values. As in the case of Edward Cullen and Isabella Swan, if this  is what young people like,  it  is ok to me. It is less dangerous than many other very bad models they get from tv or at the movies. As for myself, I really don't mind romance at all, neither if of the supernatural type. Only I  found this film a bit boring, despite the loveliness of the two young protagonists and the remarkable presence of stars like Irons and Thompson on screen. I'm pretty sure the books are much better.
Posted by Maria Grazia at Thursday, March 07, 2013
Email ThisBlogThis!Share to TwitterShare to FacebookShare to Pinterest
Labels: At the cinema, Beautiful Creatures, From Books to Movies, Movies, The Perks of Being a Wallflower, YA fiction

Beautiful words, MG. Thanks for sharing your thoughts.

... that's why I suggested you to read the books before watching! Now that you've watched this boring adaptation I bet you aren't tempted at all ;-)
ciao,
K/V

Glad you liked them, Monica. Thanks to you for being such a kind, loyal reader/friend.
And K/V, you know I don't mind reading after watching as I don't mind spoilers. I have Beautiful Creature and I'll read it. I don't know when, but I 'll do it :-)
Thanks for dropping by and reading. CU soon!