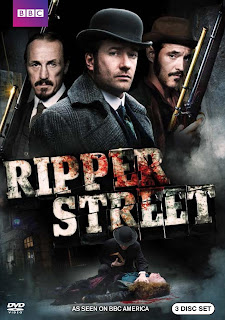 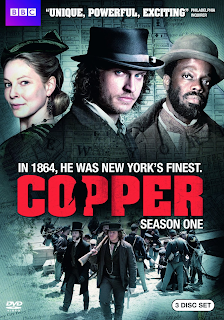 Just have a look at the two DVD covers up here and you'll immediately notice the similarities. They stroke me while recently watching Ripper Street, the successful BBC1 series starring Matthew Mac Fadyen. I had finished watching BBC America Copper on Fox Crime (one of our pay tv satellite channels) not long before.
Tough,  fascinating,  torn between their duties and tragic, painful personal experiences,  the two protagonists are police detectives fighting crime,  respectively in New York and in London,   in the 19th century. Their love for justice, their frailty hidden under a tough surface,  as well as their charming looks can get under your skin. 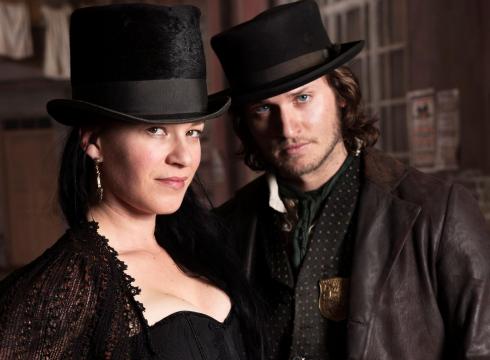 1864. Kevin Corcoran (Tom Weston - Jones,  already seen in Spooks 10 and World Without End)  is an Irish copper living at Five Points,  recruited by New York Police Department after coming back as a war hero from the battlefield of the civil war. He came back home where a terrible shock was expecting him:  his wife's disappearance and the murder of their little daughter. Corcoran can count on loyal and brave mates, Francis Maguire - closest friend and partner in the Sixth Precinct  - and  Eva Heissen - a shrewd businesswoman who runs a saloon and a brothel - 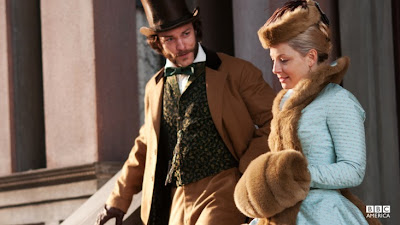 who are ready to risk their lives and to cover up truths to prevent him from suffering more. He has friends among the aristocracy too, despite his humble origins, Robert Morehouse - a handsome bon vivant who was in the 71st  Regiment with Corcoran -  and an extraordinary help in doctor Matthew Freeman - an African- American physician who was Morehouse  valet during the war.


Copper is the  first original period drama series produced and broadcast by BBC America (they usually broadcast overseas transplants) and I'm glad we  could see on Italian  pay - TV channels (Fox Crime). It is gritty and gripping, different from the British series I love watching, pretty American in fact, both in the shooting style and in context and background. It is  based on a good blend of action and introspection, has  a myriad of interesting characters, pays attention to social - historical problems and touching human relationships. Twists, turns and suspense till the very last minute of the final episode. Looking forward to series 2, since Copper has been recommissioned. 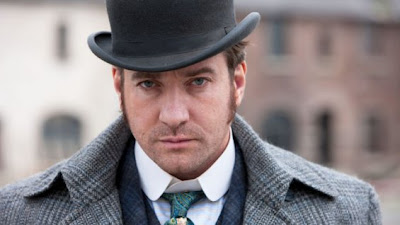 1889 - Detective Edmund Reid (Matthew Mac Fadyen already seen in Spooks series 1/3, Pride and Prejudice, The Three Musketeers, Little Dorrit, The Pillar of the Earth) teams with Detective Sergeant Bennett Drake  and US Army surgeon and former Pinkerton agent Captain Homer Jackson to investigate mysterious  killings six months since the last Jack the Ripper killing, in Whitechapel.
Each episode has got its own case to be solved and its own good quantity  of social - historical issues depicted in it: prostitution, anarchism and workers' strikes, Victorian hypocritical respectability, the imperialistic wars, the project of electrical trains underground, and others. 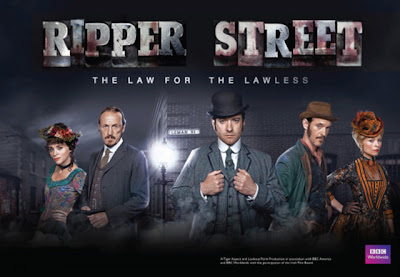 It is a brilliant series, thoroughly  scripted and shot, with an  incredible cast including Jerome Flynn, Amanda Hale, Adam Rothenberg, MyAnna Buring, Charlene MacKenna.
Watching the two period crime-fiction series back to back,  it was impossible not to notice the various analogies. Same historical setting, the second half of the 19th century,  but different geographical reality , the two detectives share a close knowledge of the lowest suburbs of their own city, both are tolerant with the business of the local brothels,  both cry a dead/missing  little daughter, they have a smart doctor in their team / as a friend. Their apparent toughness hides a very sensitive, complex personality.

Also Ripper Street has been recommissioned. We will see  series 2 in 2014.

I love both of these series! Copper has already wrapped here in the US and Ripper Street is in the final stages of the first season (though I understand it's already done in the UK). There are a number of similarities in the bones of the series, but also some obvious differences in Detective Corcoran and Inspector Reid. Corcoran is much more apt to get physical with his suspects while Reid leans on Drake for those duties. Also, Reid is the chief at H division and Corcoran is usually in trouble with his superior officer at Little Five Points station ;-).

The differences help blend wonderful tales of law enforcement during a really interesting period of history.

Hello Pamala! Thanks for dropping by and contributing your opinion. Yes, Corky is an ex boxer quite willing to use his strength while Drake is the one who copes with the "dirty tasks" in Ripper Street. Then Detective Corcoran has quite an active sexual life which apparently his British colleague doesn't have (Victorian pruderie?)
Other differences?
Both series have wrapped up here so looking forward to season 2 for both of them :-)

I totally agree, Maria! Homer Jackson is a close blend of Matthew the physician and Corcoran. Corky's character ilines up a bit more with Homer Jackson (besides the fact that his real name is Matthew Judge and he made off with Long Susan while he was suppose to be protecting her).

And you're so right--the differences in the sexual attitudes of the main characters is a stark contrast and maybe meant to highlight the America v England dynamic. Corcoran has gone through the madam and the lady which sets him apart from the unhappily married inspector. Although, Reid seems to be seething for the lady that runs that orphanage :)

I'm not sure how many more episodes Ripper Street has to air here in the US but I'll be looking forward to them all.

@Pamala
There are only 8 episodes in this series and, from what you say, you may have two ones left.

P.S. I like Jackson very much! But Corky more than Reid (but shhhh! Don't tell MMF's fans!)

You said the similarities stroke you, but I think you meant they struck you, otherwise it sounds as if you were being caressed by them

Thanks for reading my posts so carefully, Terry. Apparently I'm not that good at detecting my typos ;-)