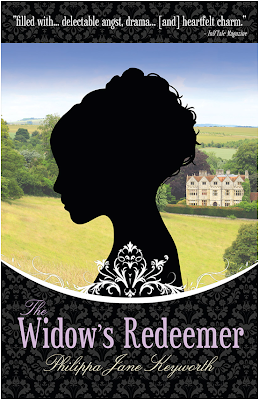 Philippa Jane Keyworth's debut novel is out today: The Widow's Redeemer.  If you like me, love historical fiction novels, you are invited to discover more about her Regency novel and about herself. Read the excerpt, watch  her video presentation and visit her links. Enjoy!

Book Blurb
“Does she have no thought to propriety?”
“No, aunt, I cannot lie to you. I do not think she does.”

A penniless young widow with an indomitable spirit. A wealthy viscount with an unsavory reputation.

London, 1815: After her husband’s untimely death, Letty Burton comes up from the country with her domineering mother-in-law. Hiding a past she wishes to forget and facing an uncertain future, all she wants is to navigate London Society as a silent companion. A chance meeting with London’s most eligible bachelor sets in motion a series of events that will bring her quiet life under the unfriendly scrutiny of the ton. With the net of scandal, debts, and rivals closing in, will she let her dark past dictate her life forever? Will she learn to trust again? And most importantly, will she allow herself to love?

Everything has beauty, but not everyone sees it.
Confucius

“I don’t understand your meaning, sir.” A little crinkle appeared between Letty’s brows. She folded and unfolded her stitchery, her hands becoming more agitated with every second that passed.


How are you? I am so sad to hear of John’s passing away. It was such a dreadful shock! I actually said to Mrs. Grockel, my housekeeper, how sudden it was. I even dropped my paintbrush when I read the letter you sent me about it. (I was in the midst of decorating a small cabinet and now it is totally ruined as I dropped a black paintbrush right in the middle. I have no idea what to do about it. Mrs. Grockel said to paint it one color again. I told her if she wished to spend hours repainting the pattern she is welcome to it!)
Anyway, I am getting quite beside the point! Mr. Burton—well, David to you, I suppose, since you are family—has become quite ill, and as I thought you may be in need of some company and so shall I, I am inviting you to come and stay with us a while. Would you like to? Please say yes, for if I only have Mrs. Grockel to speak to I may fall ill myself, though I do not wish to exaggerate, of course.
I hope everything is well with you, dear sister, and I look forward to seeing you soon. I send my love—
Your dearest sister-in-law,
Theodora Burton


Letty folded the letter and laid it in her lap. She turned to gaze out of the parlor window onto green fields that heaved up and fell away outside. Her thumb stroked the thick paper; perhaps it would be good to visit Theo. It had been a long time since she had seen her and it would be a way to save her parents any expense. Her father had been graced with a decent parish, but that did not mean money had ever been plentiful. The thought of her father only brought her mind back to John. If only money had not been so scarce when she had been young! Her father would not have had to take on gentlemen to tutor. She would never have met John, and they would never have married in a desperate attempt to avert the scandal.
She suddenly shook herself. What was she doing? Self-pity would help nothing. The past was set in stone and ultimately unchangeable. She must think of the future. If she could not change past actions, she could at least try to survive the present. She reprimanded herself and then, flicking the long plait of hair she had been fiddling with back over her shoulder, she rose clasping the letter. She sat in John’s old chair at the large wooden desk, the high back overshadowing her, and took out a sheet of paper. Once the letter to Theo was finished, sealed, and sent, Letty went about packing the few dresses she owned into a small trunk. She saw to the business of the farm, and finally coming back to Highfield, she began saying goodbye to her home.
***
And so the farm, the house, and all the possessions therein were left to the debt collectors. Letty took her final leave with only a small trunk and a portmanteau to her widowed name. She removed to her sister-in-law’s house in Truro. While Theodora’s husband remained sick, Letty would be the young wife’s comforter and companion.
The widow remembered with such clarity the day on which she left: the crisp morning air that pinched at her cheeks before she stepped up into the carriage; the sweet smell of earth that was laced with traces of briny sea air; the wind that flung her long hair back and forth, loosing it from the contraptions imprisoning it; the sky that was thick shades of iron gray and layers of towering clouds building above; the heath and shrub covered landscape in all its unruly beauty she knew so well—all was left to the elements behind her. The animals were hidden away in warm homes together, the only farewell being the natural blow of westerly winds.
The harshly sprung carriage afforded a small view of the country which she loved through a murky pane of glass. This view she engraved in her mind’s eye. She would keep it for a time when she needed to know there was a place like heaven, a paradise somewhere.

Known to her friends as Pip, Philippa Jane Keyworth has been writing since she was twelve in every notebook she could find. Add to this her love for reading, history, and horse-riding, and you have the perfect recipe for creating Regency romances. Pip's debut novel, The Widow's Redeemer (Madison Street Publishing, 2012), brings to life the romance between a young widow with an indomitable spirit and a wealthy viscount with an unsavory reputation.