Will they become as popular and universally acknowledged as Liam Neeson, Colin Farrell,   Pierce Brosnan, Gabriel Byrne, Ciaran Hinds and  Jonathan Rhys Meyers? All these fascinating men share their talent at acting and their being Irish. All of them made it in the movie industry,  getting to a huge popularity. Will Aidan Turner and Robert Sheehan, young, Irish and talented, make it too? I'd say, they've got great chances and , in fact, they are already on their way to stardom. I bet you'll soon hear of them if you haven't yet. 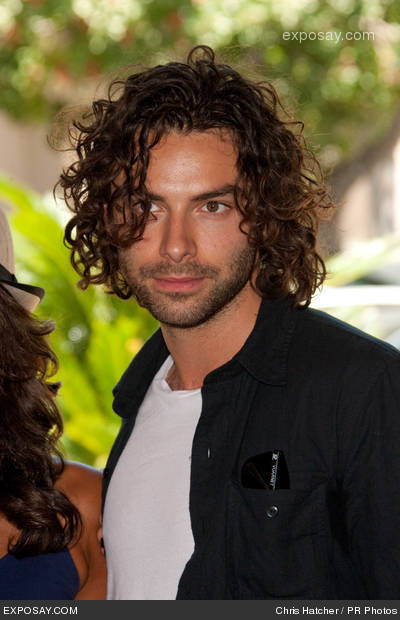 One of his first important roles was Dante Gabriel Rossetti in Desperate Romantics, a 2010 BBC2 period drama I liked and reviewed HERE. After starring as the charming painter /poet of Italian origin who started the  Pre-Raphaelite movement,  he was vampire Mitchell for 3 series of Being Human, the BBC3 popular paranormal series now at its fifth season. Mitchell had to be killed off when Aidan received a phone call from Peter Jackson who invited him to Middle Earth. You can have a glimpse at the great time he had there with a fellowship of funny mates going to the cinema these days and watching the just released blockbuster movie, The Hobbit An Unexpected Journey. Remember,  he is one of the dwarves sharing  the  unexpected adventure with the protagonist, the hobbit Bilbo Baggins, and his name is Kili. You may have problems at recognizing him under the heavy costumes, the abundant hair and the prosthetics. Is this the role of a life for handsome Aidan? Or maybe is that yet to come? Meanwhile, Aidan has got another blockbuster movie coming out in August 2013: The Mortal Instruments: City of Bones. He is Luke Garroway, a werewolf  this time,  in this greatly expected film based on book I of   Cassandra Clare 's best selling series , The Mortal Instruments. Who's ready to bet this upcoming thrilling series of movies will replace the just ended Twilight Saga in many mourning hearts? Have a look at the trailer. 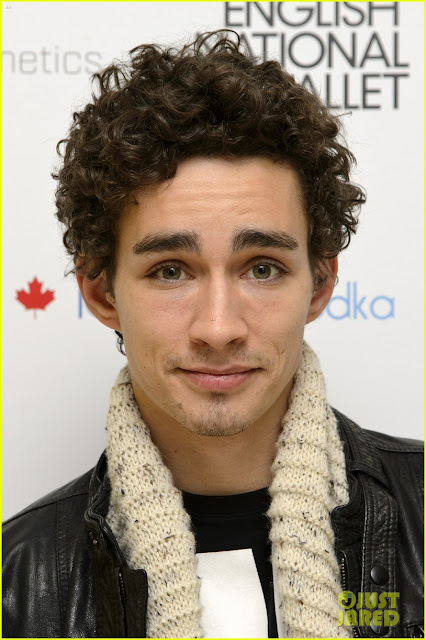 In the same movie, The Mortal Instrument: City of Bones, Robert Sheehan is Simon Lewis he will start as the protagonist's best friend, the friend of a life time for Clary (Lily Collins), who is in love with her but ... taken for granted and loved as a brother. Well, at first. I'm sure Clary will notice him sooner or later, looking at   his mesmerizing green eyes behind his nerd spectacles (Simon wears glasses). Or will Simon be the new Jacob Black and Robert Sheehan the new Taylor Lautner (thinking of the Twilight saga)?  He will compete with Jamie Campbell Bower as Jace Wayland for Clary's love. Let's hope his heart will not be shattered into little pieces. He is such a lovely bloke.
I've happened to enjoy young Robert's talent and charms recently, watching him in the funny BBC1 rom-sit-com, Me and Mrs Jones , where he is 24-year-old Billy,  swooping into the already messy life of Gemma Jones (Sarah Alexander)  as her son's best friend. He is not a presence easy to ignore for Mrs Jones, especially when he starts becoming quite fond of her.
At the same time Robert Sheehan was being sweet, romantic Billy on BBC1, he starred on RTE, one of Ireland's TV channels, as Darren in Love/Hate series 3. The   two characters couldn't be more different  and, watching the two series,  you can't but notice how talented the young actor playing them must be.
Darren is  a young man involved in the world of Dublin's  gangland and, especially in the latest series, once he has lost all his redeeming chances,  he acts quite ruthlessly. Not that in the first two series he was an angel - well he quite looked liked one when he was not  holding his gun to kill someone -  but he was torn and hoped to be able to free himself from the yoke of his bosses.
Irish audience must still recover from the shocking comeuppance the writers of the series decided young Darren deserved. "He lived by sword and died by the sword", Robert stated in one of his latest interviews.
He was also incredibly touching as Stephen in Accused Series 2, however, Robert Sheehan most popular TV role so far has maybe been Nathan Young, one of the protagonists of Channel 4 Misfits (series 1 and 2) . Another incredible tranformation for the young actor,  as Nathan is a really bizarre, funny, pestering teenager who discovers to be immortal.
On the silver screen he has recently starred as  Kay von Wollenbarth in Season of the Witch with Nicholas Cage (2011) and  as Ivan Mac Cormick in Killing Bono (2011) where he plays Ben Barnes's brother. Waiting to see him at the cinema again next summer in The Mortal Instruments, what about having a look at him as Billy Delaney in BBC 1 Me and Mrs Jones?

Not sure the Bones one is for me... but aren't Irish actors wonderful?

Love Hate was HUGE here and I missed it! Currently trying to track down a DVD!

Can I also mention Owen McDonnell from Single-Handed (an RTE/ITV series) who is pretty easy on the eye, too! It paints a very realistic picture of rural Ireland.

Well, Prue, The Mortal Instruments is a YA series following the recent paranormal trend featuring a blend of human and supernatural characters. As I wrote in the post, many say it will replace Twilight now the saga is over. But of course the target audience for this movie are teens or adults who like vampires, werewolves and shadowhunters :-) Yes, Irish actors have a certain special charm ;-)
Thanks, Lorna, for contributing to enrich my gallery of Irish talents. I'll check your link out and try discover more about Mr McDonnell.

By the way, I was thinking, I also like several Irish singers/bands. Apart from the evergreen U2, I love The Script, Ronan Keating (another evergreen), The Cranberries.

I've read the Shadowhunters books (as you know, I'm among those adults who like reading such stories, provided that they are original and well written ;-), and Aidan Turner's character is an 'adult' one - step father, if I remember well - and a 'good' one. So I imagine he is meant to be an eye candy for mothers... pity I don't see his charm at all :-/ . But I'm magnanimous, and I wish him a shiny future as a successful actor :P
K/V

You always surprise me, K/V. You've read The Shadowhunters series too? And Harry Potter, The Hunger Games, A Game of Thrones! And many others, I bet. I've often given those books as presents to my nephew and son, so I know about those stories and characters from them or reading articles and watching interviews. I happened to watch some movies adaptions of those novels, but on TV. I even saw the Twilight saga, you know (I know you don't like that one, though) I haven't seen the epilogue "Breaking Dawn II". Not yet. ;-) It'll be on satellite TV sooner or later.
Have a nice day! And thanks for commenting.