WHAT I'VE BEEN WATCHING - THE SCAPEGOAT & WORLD WITHOUT END 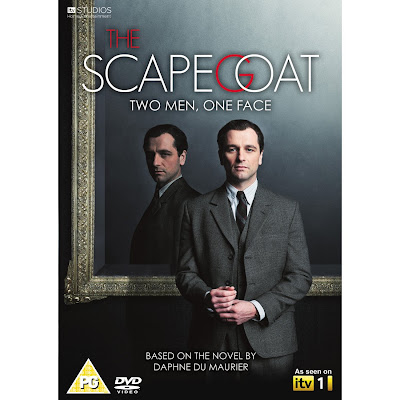 I've been watching quite a bit of great period drama recently nothwistanding my very little spare time. Downton Abbey series 3 and The Paradise ended, what we've got left is ... DVDs and satellite TV. My first recommendation is a brilliant TV movie you now find on DVD, The Scapegoat (2012), first broadcast in September on ITV. Based of Daphne Du Maurier novel, this is a great adaptation, thrilling suspence from beginning to end, dark humour, unexpected twists, stellar cast, amazing performances, awesome locations and costumes.

In 1952 schoolmaster John Standing meets the aristocratic Johnny Spence,his exact double. After a night of drinking John wakes with a hang-over to find that Spence has disappeared,leaving him to substitute for him. John finds he has 'inherited' a country house with a bed-ridden,drug-addicted mother,put-upon wife Frances,scornful sister Blanche,little daughter Mary Lou and two mistresses,one married to his brother Paul. After unsuccessfully trying to explain the situation and make his escape John settles into his new identity,surprising himself with his capability
as he helps his mother off the drugs,turns round the family's ailing glass-making business and gives much-needed affection to Frances,an heiress,whose death would make her widower extremely rich. Then Johnny Spence reappears and it becomes clear why he has used John as a scapegoat,to provide an alibi for a crime he intends to commit. This leads to a showdown between the two doubles,from which only one can remain triumphant.

Epic 8-part saga, World Without End is on Italian Sky 1 these days. Following the success of The Pillars of The Earth, and based on Ken Follet's novel, World Without End has surpassed my expectations. I started watching the series only because of some familiar faces and without reading the book first. I don't know exactly why,  but all the people I know who had read it, had suggested me to avoid it: it was not worth reading according to them, the sequel of The Pillars of the Earth was not as remarkable as the first book.
What I can say,  instead,  is that I like  its TV adaptation even more than the previous series based on The Pillars.
Stunning photography, impressive settings, good actors and lots of twists and turns. Well, I can't say "unexpected" twists and turns, since many are rather  foreseeable but, anyway, the series is fast paced and intriguing.
The familiar faces mentioned above? Peter Firth (Spooks, South Riding), Rupert Evans (North and South,  Fingersmith, Emma), Blake Ritson (Mansfield Park, Emma, Upstairs Downstairs), Tom Weston - Jones (Spooks series 10)


The plot (from the official site)

A paid assassin is sent to murder a king. A mysterious knight flees to the countryside, hotly pursued by the Queen's men. Two teenagers witness an incident in the woods that will change the course of a nation.
In the thriving town of Kingsbridge, the latest marketplace gossip is the strange circumstances of the King's death. The civil war is over, Kingsbridge's economy is robust and merchant coffers are full.
All is well in Kingsbridge until the two noble young men bring their wounded knight to the Priory to be doctored. Sir Thomas Langley surprises all by buying his sanctuary in the Church as a humble monk using a dowry from the Queen. What could he possibly have on Queen Isabella to warrant such support?
Without warning, Kingsbridge seems suddenly under siege. The Queen's ardent supporter, Sir Roland, marches in and usurps the Earldom of neighboring Shiring, condemning the reigning lord to death as a traitor. Roland's list of men, who supported the old King against Her Majesty is long – and they will all hang. The rest must pay dearly in taxes to support her claim to the French Crown - marking the beginning of the 100 Year War.
Caris, a visionary young woman, struggles to rise above the suffering and oppression in order to lead her people out of the dark times. In order to save Kingsbridge, Caris, along with her lover Merthin and Sir Thomas Langley, build a community that stands up to The Crown and The Church. Their courage inspires a nation and throughout Europe commoners and peasants stand up for their rights and revolt against their oppressors - a new age emerges.
The cast
Ben Chaplin Sir Thomas Langley, Charlotte Riley Caris, Nora von Waldstätten Gwenda, Oliver Jackson-Cohen Ralph, Rupert Evans Godwyn, Tom Weston-Jones Merthin, Tom Cullen Wulfric, Blake Ritson Edward III, Cynthia Nixon Petranilla, Aure Atika Queen Isabella, Miranda Richardson Mother Cecilia, Peter Firth Sir Roland. 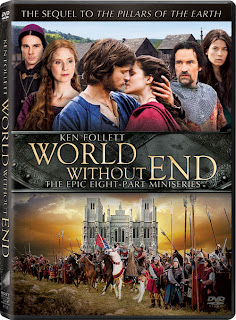 The DVD and Blu-ray

The mini-series is from Ridley Scott's Scott Free Productions, and co-produced by Germany's Tandem Communications. Sony Pictures Home Entertainment will bring this new 8-episode program home to Blu-ray Disc ($75.99 SRP) and DVD ($65.99 SRP) on December 4th. Both 2-disc sets will also include a Featurette, "The Making Of Ken Follett's World Without End." The episodes themselves have a chess theme, being named "Knight," "King," "Prior," "Check," "Pawns," "Rook," "Queen" and "Checkmate." Packaging for the Blu-ray and DVD versions are shown at Amazon.com where you can pre-order them.