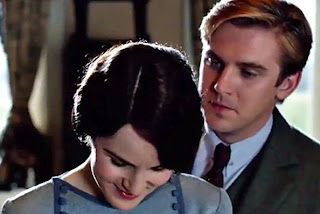 I've been in heaven these last few weeks with two weekly dates with my beloved period dramas: The Paradise on Tuesday and Downtown Abbey on Sunday. Double pure delight!
ITV hugely successful drama, at its third season, will be over tonight at 9 p.m. What do we have to expect? Will we see a series 4? Will the prequel we heard about take its place instead? Let's wait and see: ITV has found a gold mine in this successful   show, I'm sure they won't let it down so soon. 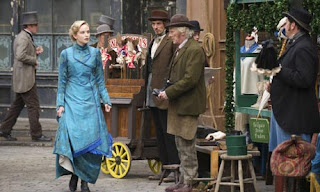 BBC1 The Paradise, on the other hand, is totally new and will go on for two weeks more. It has been recently announced that a second season has been commissioned after the rewarding viewing figures (average audience of 5.9 million viewers) for the first one. And I'm terribly happy to hear that.
What has happened to me is that I've been won by the new BBC1 series loosely based on Zola 's "Au Bonheur des Dames" , by its different setting (a 19th century department store in an unnamed town in the North of England) and by its new characters. So,  I  started waiting for Tuesdays more eagerly  than for Sundays. Mr Moray and his little champion Denise , Miss Audrey and Edmund Lovett, Pauline and Sam, Clara and Mr Dudley, Young Arthur and Mr Jonas have definitely conquered my heart. Did I forget anyone? Oh, yes, Miss Glendenning and her father. Maybe, it is not casual, since they are not exactly my best favourite characters, as you may have guessed.


My interest in the series has been growing episode after episode till the latest one, episode six.  Why was it so special? Lots of things, actually.

Who can resist a dashing hero in a very elegant 19th suit, sitting in despair, his head in his hands and, especially, in shirt sleeves and his necktie gone? Deja vu? Maybe you're right but ... it worked! 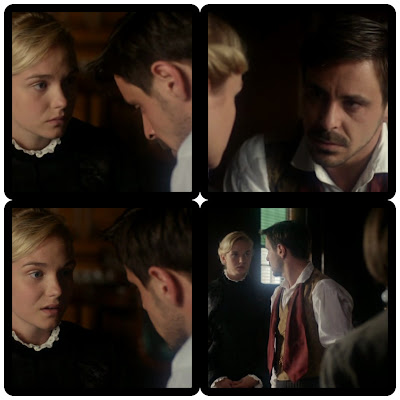 And what about the Dickensian subplot of gloomy Mr Jonas scaring smart young orphan Arthurto death ? 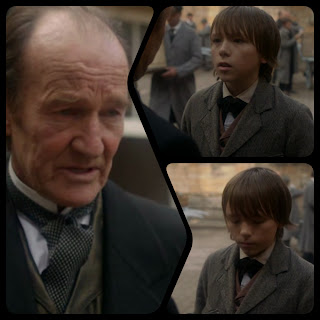 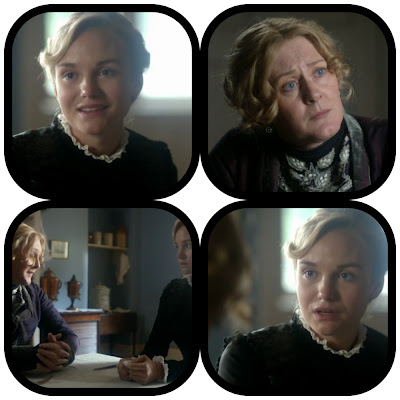 I have to restrain myself not to reveal too much, not to spoil the pleasure of  discovery for those who still have to see it. One thing is certain, if you love costume series, you won't be disappointed by this new BBC show.

Anyway, are you ready for tonight? Ready to say goodbye to the many lovely, pleasurable moments Downton Abbey has given us so far?  I only hope they leave us with a great, shining, memorable season finale. Then, it'll be Tuesday again. Thanks a lot, British TV, for your brilliant period drama series!
Posted by Maria Grazia at Sunday, November 04, 2012
Email ThisBlogThis!Share to TwitterShare to FacebookShare to Pinterest
Labels: BBC Drama, Costume drama, Downton Abbey, ITV Drama, Period Drama, The Paradise

The Paradise sounds wonderful! I hope they decide to show it in the US. I cannot get enough of BBC television! I am so excited to finally watch Downton Abbey season 3 in January and I am really enjoying Call the Midwife right now!=)

How many times have you watched that "certain scene"? I think you already know what my biggest wish is for The Paradise after we saw a "beautiful scene" from episode six. :) I won't say anything more about the series because I don't want to give any spoilers. Please pardon any grammatical errors. :)

@Kelli H @Brooke
Thanks for stopping by and sharing your enthusiasm for period drama with us!
And yes, Brooke, I re-watched that "certain scene" a few times, I must confess. :-)
Have a great Sunday, both of you. MG

i adore bbc tv shows too. their period dramas are especially good, in terms of plot, atmosphere, directors and casting.

I also enjoy watching The Paradise, more than I initially thought I would. Bur Mr. Moray does not intrigue me. I also didn't catch the references you are talking about ;-)
Monica