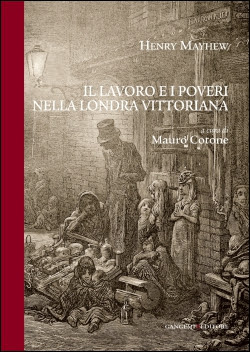 London Labour and the London Poor is a remarkable work of Victorian journalism by Henry Mayhew, Dickens's contemporary and like Dickens celebrating his bicentenary this year (both were born in 1812).
Mayhew observed, documented, interviewed, described hundreds of poor people living in the abyss which was London in the 1840s-50s for a series of articles published in the Morning Chronicle. Those articles were later on compiled  into book form (1851 in 3 volumes, 1861 a fourth Extra Volume was added).

As a fond reader of Victorian literature, yesterday I was in Rome, at Biblioteca Nazionale Centrale, for the presentation of the first Italian translation of Mayhew's work by Mauro Cotone: Il lavoro e i poveri nella Londra Vittoriana.

The Italian version of the work is a selection of 138 articles out of the many hundreds Mayhew wrote. Mauro Cotone selected them obtaining a significant wide range of typical figures from the crowd inhabiting London slums: beggars, street entertainers, mudlarks, prostitutes, labourers and thieves. A great portion of those destitute beings had no fixed place of work nor a fixed abode, they lived in the slum alleys and streets where Mayhew meet them. The caricatures full of pathos we find in Charles Dickens's pages become sketches of real people in these articles, people telling about themselves in authentic first-person accounts and objectively described by a professional reporter.

Mauro Cotone's selection is a thorough work presenting a very rich variety of characters from London underworld with great care for the translation, not only of Mayhew's journalistic prose but also of Victorian poor people's slang, and with the addition of a great deal of information to support readers unfamiliar with the reality and history of the Victorian Age. If you open the book random and read the story chance proposes you,  you'll be taken away into a dark,  desperate world, as compelling as Dickens's, but without his grand eloquence, emphasis or hyperboles.

This work is an incredible data bank completing academic studies of the Victorian Age, a useful supplement to studies of Victorian literature, a wonderful source for historical fiction writers.
It may also suggest stimulating contrasting analysis with works focusing on 19th century London - like Dickens's novels, Marx & Engels's essays or Jack London's People of the Abyss (1903) -  or it can be read following the thread of the social and economical transformations of the age.
Last but not least, this survey can bring forth important reflections and analogies with the appalling underworld  of a 21st century megalopolis. Back to the future?

I still haven't read this yet. Glad it's been translated into Italian for more people to study.

I'm glad you managed to come, MG:
it's been an interesting presentation. Oddly enough, in the novel I'm reading right now, Long John Silver: the True and Eventful History of My Life of Liberty and Adventure as a Gentleman of Fortune and Enemy to Mankind, by B. Larsson, the title chararcter meets Daniel Defoe in London, and they talk for a long time of different topics, including the life of common people in London at their times.
I was struck by the coincidence, but I shoudn't be anymore, should I? ;-)
K/V

Dear K/V and Trudy,
Thanks for your visit and for contributing your comments!
And, K/V, you are engaged with so many different tasks these days, how do you manage to find the time for such interesting readings? Defoe's London is a great link to the book presented in this post. Struck by the coincidence, too!