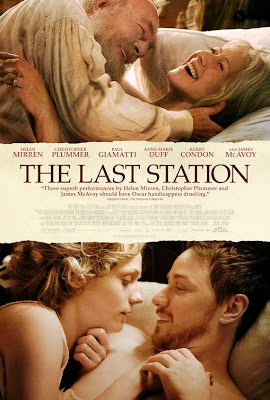 "The greatest way to improve each other's lives is not through money, gifts, good advice, or even work, but through love. Every person's responsibility is to nurture love and bring it into this world,"
(Leo Tolstoy)

I've been looking forward to seeing this movie for a while now and finally saw it yesterday .I thoroughly enjoyed everything about it!
Starring Helen Mirren as Sophia Tolstaya, Christopher Plummer as Count Leo Tolstoy,  James MacAvoy as Valentin Bulgakov, Kerry Condon as Masha and Paul Giamatti as Vladimir Chertkov, THE LAST STATION (2009) is a film directed Michael Hoffman based on Jay Parini's novel telling about the last year in Tolstoy's life. 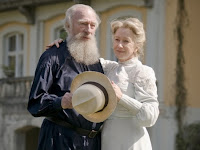 It is indeed a story full of strong feelings and emotions, conveyed by extraordinarily good performances by all the leading actors. They were all awesome, touching, brilliant.
The events take place in the large country estate of Leo Tolstoy who in 1910 is a wise but troubled old man who is trying to take stock of his life and his work, but whose celebrity status gives him no privacy or peace. The story explores the many shades of love in his life and in the lives of those around him. His ideal of nurturing love is a noble one but hard to handle in the world of competition, jealousy, fixed ideas, and rigid ideology.

In 1910 Count Tolstoy was under considerable pressure from his Tolstoyan followers to reject his wealth and surrender the copyright of his works. Tolstoy’s aristocratic wife Sofya was deeply opposed to the Tolstoyans whom she believed were pressuring Tolstoy to remove her from his will. Christopher Plummer as Tolstoy and Helen Mirren as Sofya were both nominated for acting Oscars and they do a fine job at conveying a tender love that persists despite huge political and ideological differences. Paul Giamatti and James McAvoy are also terrific as two Tolstoyans with McAvoy playing the film’s lead character Valentin Bulgakov, Tolstoy’s new secretary whose loyalties are torn between ideals and love.

Valentin, played fetchingly by James McAvoy, is a bewildered witness to the crisis in the stormy relationship between Tolstoy and his wife, which results in Tolstoy fleeing Sofya and his estate, only to die at a lonely railway station many miles away, with the world's media (such as it was in 1910) looking on. Unfortunately Valentin, based on a real person, is not only green but rather ineffectual and he is in the story as a witness rather than as an actor. One of the features of Tolstoyans was that they all seemed to have kept diaries and these provided Parini with most of his material. You can see why Hoffman made Valentin the central character. He is seducted by the lovely Tolstoyan Masha (Kerry Condon) in contradiction to Tolstoyan-mandated chastity but it is the relationship between Leo (Lev) and Sofya that provides the real drama here, and the final scenes between them are genuinely moving.
And moved I was. To tears. 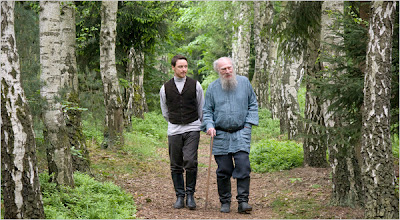 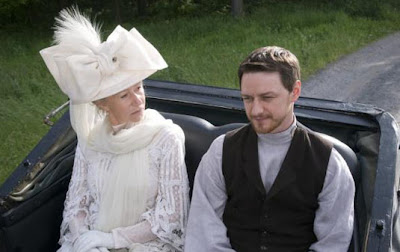 I loved this movie too MG. I also really enjoyed the relationship between Valentin and Sofya. He really seemed to understand her, and was a sympathetic friend when it seemed everyone was against her.
I liked how this movie showed all sides of the picture. It was very strong on characterization which is what made it so poignant. I also found it very moving. Lovely review!