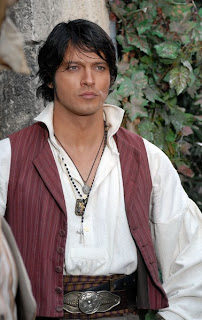 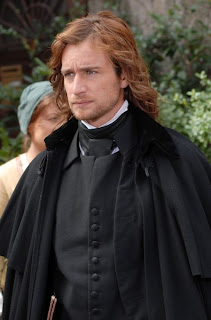 I've been watching this 4-part Italian costume drama, "Il sangue e la rosa" (The Blood and the Rose, 2008). I can't say I'm fond of Italian TV drama, but I can't say I didn't like this series at all either. It was based on a good script, a good blend of comedy and drama set in 19th century Rome. Beautiful settings and costumes, intriguing plot full of the many traditional features of period drama. However, there was something definitely disturbing, something I remember I have already discussed on this blog while  reviewing other Italian TV series ( David Copperfield, Il Falco e la Colomba).

I can't bother the fact that often in Italy you can be "something" or "someone" even when you do not possess the indispensable knowledge, talent or competence . Is it the same in your country? Better I'll stop here, since I've always avoided serious reflections about the state of my country Fly High, especially because it is my escape from sad  reality. But this is what I  won't avoid saying  today: it seems that to be an actor or an actress in Italy you don't need to be  talented or at least decent at acting .

You can just be a popular face from "Big Brother" or other TV  reality shows, a very handsome bloke, a very gorgeous young woman... that is enough to be in a cast . "Il sangue e la rosa" stars  good  actors and actresses such as Giancarlo Giannini, Franco Nero, Virna Lisi , Franco Castellano, Martine Brochard but also several  good-looking "dummies" rather improbable as actors or actresses . Their elocution, the way they deliver their lines,  is often pathetic. Their facial and body language quite static.

This lack of competence and talent is  something I just can't stand. Not only in the acting field,  but also and especially in crucial fields like politics, health care, education. I claim the right to have the right person in the right place.
This is not what I exactly wanted to write about, but this is what came to my mind reflecting on the bad acting of part of the cast . Fortunately  the  acting  standards of the other part were high. Pity is ... It is like mingling "il diavolo e l'acqua santa",  we usually say. It means "mingling the devil with holy water".
Anyhow, I got to the end of it ,6 hours, to see how the story developed and ended and it was amusing, intriguing end even gripping at times. If only those dummies had gone to drama school at least for some days in their lives! Watching the good actors and the dammies together was something  like zapping from a good period drama to the parents' recording of  students' school plays. 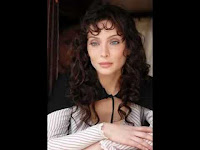 Ok. Sorry for being so blunt, I hate when I have to be that critical. And you will wonder why  I persist in watching Italian period drama if I'm well aware of what it is like... Because from time to time I've found something good and I've been happy and proud. Hope is hard to die.
But as I told you, the script was not that bad. Light, hilarious most of the time,  but also full of twists and turns. The plot is quite complicated but the main level of the narration focuses on the 3 protagonists. In fact, a triangle of friendship and love is at the heart of the story: in the small town of Cave (not far from ny own town) the charming young daughter of the host of the place, Isabella Malvolti (Isabella Orsini) spends her time between forbidden books and his only best friend, Rocco (Gabriel Garko) , a handsome young worker who has always been in love with her.

Rocco tends to be a rebellious leader, ready to risk his own life to defend the weak, he is restless and passionate. He will start getting in troubles with the law. Giulio Mancini (Mirko Petrini), instead, arrives at Cave with his mother Camilla (Martine Brochard). They are from a noble family but they have to hide themselves as outcasts since their respectively father/husband, Count Umberto Mancini (Franco Nero) , died as a "carbonaro" throwing leaflets stirring  to rebellion from the top of a  tower.
An indissoluble bond of friendship and love starts between Isabella, Rocco and Giulio:   the two young men  are loyal  friends to each other but both in love with Isabella, who is torn between her close friendship and love  to both . The 3 will meet again in Rome at the beginning of the 19th century and will have to face many hard experiences, misadventures and sorrows. Isabella will have to make her choice in the end but it won't be easy.


Watch the trailer just to have an idea of the atmosphere in this series.

Looks like my type of film, however I do not think this is available where I live.

I understand your point perfectly. That's why I avoid watching Italian TV. Not everything is bad but the pretty "dummies" as you call them always prevail and I can do better with my time. It's a real pity because there are real talents in Italy but the looks are always more important than talent. Even the News have become a depressing and annoying aimed only to shock and upset the viewers with gory details. Floods and earthquakes around the world and they spend hours on end broadcasting about a murdered teenager somewhere in the South of Italy!!!! Sorry for this too long a comment but I needed to burst it out! Ciao. A.

@Avalon
No, I don't think the English-speaking market buy any Italian product seen the huge quantity of good quality shows in their native toungue! You can find this series on line both in streaming and on Youtube but what about Italian? And can you understand the Roman dialect? Because some characters even use dialect...
@ lunarossa
Copy. MG

Acting quality is probably much the same in most English language cultures. Mine is a big country with a small population; in general, actors are good because the TV market is small. Some of our exports to south of border, though - some, not all, are dubious. At least the Blood and the Rose has Gianini, Franco Nero and Virna Lisi!