London 28 December, 2010
We woke up in a foggy, rainy, cold  London this morning. It was less cold then yesterday though. Our first goal was the Victoria and Albert Museum. We spent the whole morning there till 1.30 p.m.
I didn't expect such an amazing, astonishing variety and quantity of exhibitions and collections, though I had read and studied about the British Empire and Prince Albert's Great Exhibition (1851) . First thoughts that came to my mind in front of  the luxurious show off were pages from Dickens and Gaskell about poor people starving or having to witness, helplessly,  their children's starvation, however, I could but be amazed and feel admiration for such supreme achievements of the Royals of the time. To compensate the awkward feeling I had to be honest and think that  it was during Queen Victoria's reign that England began a stunning  process of reformation and progress. 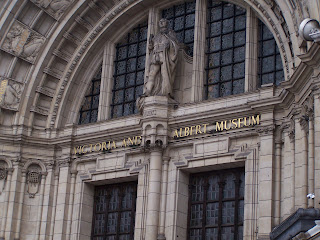 You can find so many interesting things inside this huge museum that you can't see them all and carefully in a few hours: from lots of statues to numerous paintings, from ordinary life utensiles to very precious ancient jewels, from common objects and fabrics  from distant colonies to very British collections. 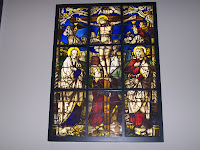 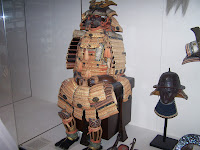 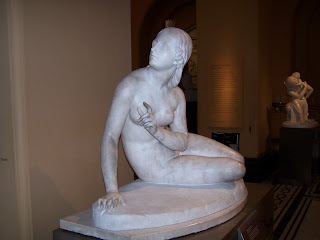 I particularly liked the fashion and furniture items from different ages. Look at these beautiful dresses, for instance... 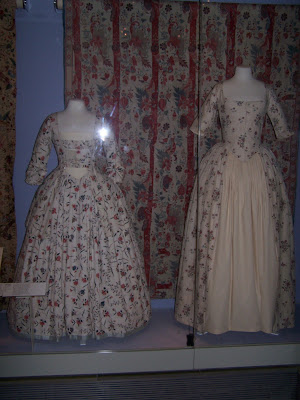 Chintz costumes, a fabric coming from India. At the beginning it was used by humble people then it became  fashionable both among  rich men  for gowns and among fashionable noble  women for their dresses in the 17th century, especially after Willam and Mary ascended the throne  in 1690. It was in fact a successful  Dutch fashion trend they brought into the English court. 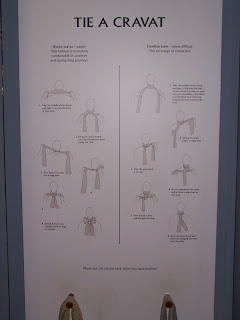 Loving period drama I was enchanted  at the sight of these beautiful clothes above . Gorgeous dress that last one, isn't it? But how could they possibly pass through a door? Well, it was necessary for the wearer to go sideways. No other way. Anyhow, this embroidered silk dress was impressive.
My husband and son had fun  trying to make the Byron cravat and the Gordian knot while I was wandering about.
I also saw  a dress and pottery from the Regency Era and a wonderful book case full of precious volumes from the 18th century. There was not much from my beloved Jane Austen's time  but the little I found was very beautiful.
Dating back to the 18th century there was also a portrait of the Garricks and pieces of the luxurious furniture in their house. David  Garrick was a very famous  actor, playwright and theatre manager  at the time of Jane Austen. Dr Johnson wrote he lived as a prince more than as an actor.
As you can imagine, I've got so many pictures from the Victoria and Albert Museum  that I could go on for long still. But  I'll add just  one more, ok? A painting of the Queen and Prince Albert inaugurating the  1851 Great Exhibition,  from which most of the items I've seen today come from. The location was the Glass Palace in Hyde Park that  was  destroyed by a fire later on. 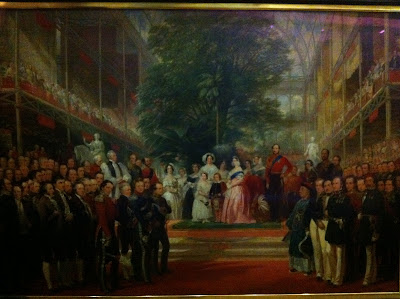 My pictures are not perfect, I know. However they are my memories of these days full of good emotions and positive sensations. I love concretely seeing history with my own eyes after reading about it so much. That is what I did today in this immense museum.
The afternoon was dedicated to shopping and entirely spent in the crowded central streets. Finally, exhausted for the endless wanderings, I had time to finish watching BBC1 Upstairs, Downstairs. The third and final episode was on tonight and I was lucky enough to watch the whole series here in London. Brilliant costume drama. I loved it. It deserves a proper space and a proper review on Fly High, doesn't it? Till very soon from London or home. Hugs. MG

Funny that you're writing about the V&A while I'm reading about it! Part of Antonia Byatt's 'The children's book' is dedicated to the birth of this museum, and to the lives of many artists of that era (potters, arts and crafts, and so on). Not to speak about Fabian and Suffrage movements. Quite interesting, I dare say :)
Enjoy your stay in London, my friend.
See you soon,
xx K

Wonderful pictures, thank you so much for sharing them, Maria! And I am SO jealous you got to see the new Upstairs Downstairs! Looking forward to your reviews!

Long time, no talk:) I am behind in the blogging community as I have been too busy to be online. I hope all is well for you. I am trying to catch up on all my dear blogger buddies blogs. I am WAY behind.


I hope you and your family had a Merry Christmas. I wish you a Happy and Safe New Year.

I love the last dress!

Great posting and love the pictures - I am a big fan of the V&A museum though it is too long since I have visited it. Glad you have been enjoying your second visit to London, and hope you had a wonderful Christmas.

Thanks for the pictures! The museum looks fabulous! I too would be spending much time looking at the clothes and fabric.
I got to see a display of clothing from the Elizabethan era once at the Ontario Science Centre in Toronto and I was totally enthralled. I stayed too long and almost missed my flight home!!

Thank you for the post and the pictures. I loved my own visit to the V&A and was only sorry that I did not do it properly. Next time it will be done so much better.

How to tie a cravat! *can't help but giggle* Brilliant, absolutely brilliant. Love it! :D

Happy new year! Hope you have a fantastic 2011!