HAPPY CHRISTMAS, RA friends! Christmas is a time for family and friends, it's a time for loving and sharing ... So  Christmas Eve is perfect to share my RA Friday corner with a good friend I've met on line thanks to my devotion to Richard Armitage. She lives in Tasmania, I live in Italy. She loves writing, I prefer reading. She likes outdoor activities, I 'd rather spend my free time in less adventurous tasks. Both share a great interest in Richard's work and  in his talent. She even gave  me the occasion to go to a masked ball with him! And, finally, as only a very good friend can do, she gave me the perfect Christmas present.

"This next part of The Sheriff’s Collector is especially dedicated to MG, from Fly High, without whose friendship my love of all the series of Robin Hood would have been much less fun"

This means that she dedicated me the latest -thrilling and romantic - part of her fan fiction inspired to Richard's Gisborne. Perfect gift which I appreciated very much. Prue is my guest today. She is here for this very special Christmas RA Friday. 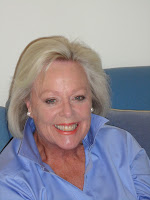 Prue lives in the tiny island state of Australia called Tasmania.  She has a Bachelor of Arts degree majoring in History, Political Science and Legal Systems and post graduate qualifications in librarianship.  She has two adult children and with her husband, runs a wool-growing and cropping farm.  She has had two books published by the UK publishers, YWO, and they are currently being prepared for e-book release.  Her third book is in submission in the UK.
You can follow her on her blog, Mesmered's Blog.


Reading Fly High’s RA Friday has been a highlight of my Saturday mornings here in Australia.  She always manages to come up with some newsworthy item about Richard Armitage’s career, past, present and future, that’s engaging and informative. 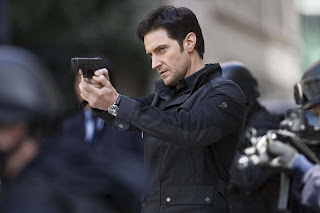 Since the end of Series #9 of Spooks, she’s had a number of guests on RA Friday, all authors and all who were inspired in some way by any one of RA’s many characters.  I found this fascinating.  Because when I began writing my latest book, three years ago, I’d just watched Series #1 of the BBC’s Robin Hood and whilst my heart didn’t flutter each time Guy of Gisborne appeared in a scene, there was something that sharpened my attention; some indefinable thread that flew threw the air, hooked me and reeled me in like a fish on a line.  I would think about it later, halfway through Series#2 . . . and I’ll go back to that point in a moment.  But in the meantime I’d just started the first draft of A Thousand Glass Flowers and was seeking a persona for my male protagonist.
I’ve always flipped through magazines and internet images seeking physical attributes for my characters.  If I’m really lucky, I can often find one person who by appearance and manner, perfectly embodies the character in question.  In TGF, there was no doubt that RA aka Sir Guy of Gisborne was Finnian of the Færan. 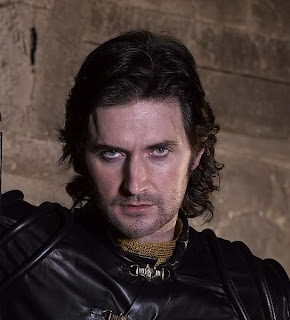 And this is where I go back to my comment of earlier.  Halfway through Series Two of Robin Hood, I began to take serious note of RA’s acting.  It must be every actor’s dream to know that irrespective of your face or physique, and irrespective of the character you play, that you have, by dint of a twist to the head, a way of walking, a tone of voice, grasped your audience so tightly that you are dragging them with you every inch of the way.  In Gisborne’s case, for me it was a brooding stillness, the volatile calm that exists minutes before the worst thunderstorm.  This so embodied my own Finnian – a damaged man whom one would find was given to vast moments of cruel introspection. 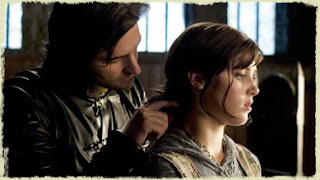 In real life, seeing RA interviewed confirmed my thoughts about stillness.  He would sit and speak without moving, so that the listener became entirely focused on the content of the interview.  I took that characteristic and ran with it, hoping it would create an enigma in my reader’s mind: a protagonist who was a duality; on the one hand this unusual stillness, on the other, an explosion of high emotion.
Right through to the end of RH Series #3, no matter the script, it’s what engaged me the viewer and me the writer.  Much the same existed in the beginning of Spooks#7 and in North and South, which I didn’t watch until much much later.  But of course by then I’d finished the first draft of TGF and Finnian was well and truly established in my own mind and on my computer screen.
Whether I’ve been successful or not is in the lap of the gods.  After the last few months of intensive editorial from London, the story was finally called in and today I mailed the printed manuscript to the UK.  If it’s successful and manages to enchant a publisher, I will owe a great debt to Richard Armitage. 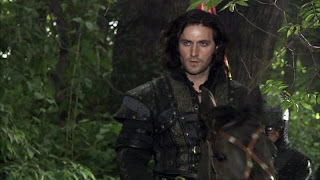 In the meantime, I’m being totally self-indulgent and re-writing the Guy of Gisborne story my way . . . but of course there are no prizes for guessing who inspired the voice and mannerisms of my male protagonist in this instance!
Happy, happy Christmas to all Fly High friends and many many thanks to Fly High (and to Antonio for being so patient) without whom my year would have been so much poorer.

Thank you, Prue. Have a splendid Christmas time. The same wish to you all, dear friends , and to HIM, lovely Richard, who has sent us  his personal Christmas wishing message. Yes, he did it!!!
I bet you've already read it, but if, for any reason,  you've missed it...
go, read and enjoy Richard's message on RichardArmitageonline.
HAPPY CHRISTMAS !!!
Love
MG
(For this RA too I'm indebted to Ali and her
amazing screencap gallery at www.richardarmitagenet.com)
Posted by Maria Grazia at Friday, December 24, 2010
Email ThisBlogThis!Share to TwitterShare to FacebookShare to Pinterest
Labels: Guest posts, Richard Armitage

Thank you Prue and MG, but above all thank you so much Richard for being so wonderfully inspiring to so many talented people :)
Happy Christmas to you all,
xx K

Merry Christmas MG and what a lovely dedication for you. Have a lovely holiday xx

@Karen @Ali
A joyful Christmas time to you who are equally precious to me, the first one in my very-busy-almost-crazy RL and the second one in my very busy-but-often satisfying VL. Big Hugs to both of you.

Happy Christmas to you and thanks for all the brilliant RA posts. Here's to more in 2011. I'm off to read RA's message now, thanks for the tip.x

May your Christmas be blessed with much joy, peace and happiness.

@Debs @Mystica
Joy & peace for your Christmas too. Thanks for your friendly support and your enthusiasm. Hugs. MG

Lovely interview, as only you can do it MG!
How nice to meet an author who was inspired by our wonderful Mr. Armitage. The man is such a muse! :)
Merry Christmas Maria Grazia, Prue and all MG's readers!

@Phylly
Thank you, P. A wonderful Christmas time to you too! The man IS a muse! :)