"Marriage is the tomb of love" . This is one of Casanova's most widely-known quotes. 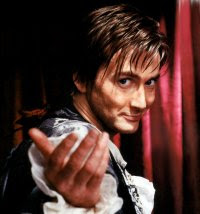 YES! My attraction to libertines and rakes couldn’t but lead into  Giacomo Casanova ’s arms. How could any woman resist his seductive charm? Usually Casanova’s name is confused with that of Don Juan but while the latter is a literary,  fictional rake, the first one is a real man, born in Venice in 1725 and died in Bohemia in 1798. He was so famous as a womanizer that his name remains synonymous with the art of seduction.
His memoirs are considered the swan song of the 18th century libertine. In Bohemia he died surrounded not by lovers but by books. “He did not go down shouting his disdain for morality, like Don Giovanni he went with a wry smile and a knowing joke as the curtain fell.” ( Ian Kelly, “Casanova: Actor, Spy, Lover, Priest”)
The  3-part BBC  version of Casanova I've been watching is extremely delightful. The cast is outstanding, especially David Tennant  as younger Casanova , Peter O'Toole as the older Casanova (who is narrating the story to a young woman years later). The sets and costumes are colorful and romantic and the script is generally witty and funny. David Tennant saying  : "You love your wife, I love your wife, we're on the same side!" is  just memorably brilliant. Most of the plot is focused on Casanova’s romantic relationship with his true love, Henriette (Laura Frazer) , who choses a convenient marriage to Grimani ( Rupert Penry-Jones )and condemns herself and his lover, Casanova, to a life of longing. She will always watch on Giacomo and will come each time he will be in need of help.  Henriette is a beautiful character, as are Rocco (Shaun Parkes ,  his loyal friend and servant) and Bellino (Nina Sosanya  , a castrato? a man! No, Casanova's almost - wife). 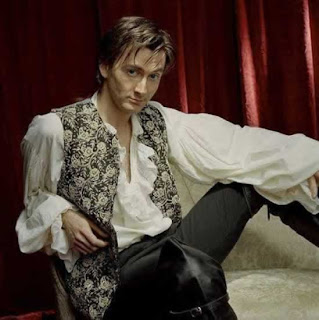 This mini – series is funny, irreverent, very fast moving and it keeps you watching. David Tennant portrays Casanova as a cheeky 21st century  rake and is immediately likable. At first sight.
Peter O'Toole, as the older Casanova explaining his life story to a girl of formerly high family who has fallen on hard times and is acting as his maidservant, performs his part with all the best elements of his enormous experience. 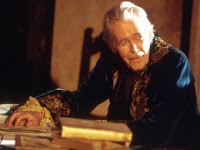 Giacomo Casanova died in 1798. A year earlier, Napoleon had brought an end to the long debauch of the Venetian republic and its even longer decline. The whole 18th century culture would soon die, too, fading away and leaving space to the Romantic ideals. Europe was about to become what playful, joyful Casanova could never manage to be: serious.
Posted by Maria Grazia at Wednesday, August 04, 2010
Email ThisBlogThis!Share to TwitterShare to FacebookShare to Pinterest
Labels: BBC Drama, Costume drama, My DVD collection

I absolutely LOVE this!
I originally decided to watch it because RPJ was in it and I am a huge [spooks] fan. I thought he was wonderful in it - I like the duel!
I am not a Dr. Who fan at all...I've tried to watch...I don't like it.
But when I saw David Tennant as Casanova I fell completely in love with DT! He is perfect as Casanova for me!

@time4t
This is a brilliant Casanova. It is the first time I see something with Tennant in it. I had never seen him acting before. Brilliant as Casanova. Guess what? I got the DVD of Casanova and Hamlet together so, next thing with Tennant I'm going to see...HAMLET!
P.S.
I also appreciated RPJ as odious Grimani ( the duel scene with him crying for love was great!)and have always been a huge Spooks fan (since series 1 with Tom /Matthew Mac Fadyen)
Thanks for commenting.
MG

Yeah, its in my library system!! Definitely looking forward to this!
@t4t: RPJ!! something else to look forward too!
Might have to look for Hamlet as well; Patrick Steward had my fancy a decade (or is it more) ago...
MG: I saw David Tennant for the first time in Viva Blackpool, I've been to Blackpool, but it is a fun, sexy, cheeky show and has other well-known faces. Not period drama!

@iz4blue
Well, I know David Tennant is one of the most popular British actors but I just met him ... by chance! After Damerel, Lovelace and Valmont I'm hooked by libertines. And then I discovered this new BBC/RSC production of Hamlet and I wanted to see it. I'll let you know what's my opinion about it is. I've seen several Hamlets in my life and I usually do not like modern adptations. Let's see what happens with Tennant's Prince of Denmark! Thanks for passing by and commenting. MG

Oh Maria-I’m so glad you did this brilliant review! Ever since I went to Venice four years ago, I’ve been fascinated by Casanova and I love this BBC adaption! It’s witty, entertaining and with depth. “You love your wife, I love your wife, we're on the same side!" This was also one of my favorite lines from the movie.
And I don’t think he was just a womanizer, but he made it an art- the ‘art of seduction’ indeed :)

I need to see this! I adore Peter O'Toole and David Tennant (though I am most familiar with him in the role of Barty Crouch Jr. in Harry Potter and his two appearances in the only two episodes ever made of the amazing farcical cooking show, Posh Nosh). Apparently 2005 was the year for Casanova - a quick search showed three films about him made that year. The only copy I seem to be able to find of the BBC version is on YouTube. I wonder why it isn't available on DVD?

@Lua
You've been to Venice? Dream city! :-)
And I understand you completely in your fascination with Casanova. I like to think he really loved women and wanted to make them happy while Don Juan found his satisfaction in seducing innocent and prudish girls or ladies and crow over their surrendering and over their consequent ruined reputation. He was more sadistic and wicked than joyful, playful Casanova. Thanks for your comment. Big Hug! MG

@Alexa Adams
I'm sorry you can't find this DVD but, maybe it is because you're in the US and the DVD available on line is for Europe. Let's see if I can help you find it...I'll let you know. Thanks for your contibution! Hugs. MG

Hi MG, I don't know why but I cannot find the dvd either here in the UK. The only chance is to get an import from teh Netherlands with Dutch subtitles! Love your review. Thank to you I'm discovering all these little gems that I've missed during all my years living in England! Ciao. A.

Casanova...I need to meet him!

@Avalon...When you meet him, ask him if he has a brother for me....lol

I have only seen bits and pieces of this series, really need to see the whole thing as I like David Tennant - I'm another of those who really liked his recent 'Hamlet', and I also loved him in 'Doctor Who'. I just had a look at Amazon in the UK and they do list the DVD set but only seem to have second-hand copies, some going cheap, so I'm guessing it isn't available new at the moment. Enjoyed your review, MG!