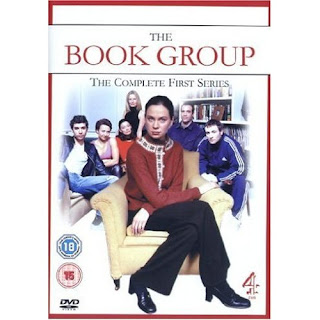 Me & Book Groups - A complex quest for an idillic relationship
I’ve been engaged in a group reading of Jane Austen’s major works in the last six-months, as many of you already know, I guess. I was not the one who had the idea , I was invited as a JA’s lover to lead and moderate the club. The activity was suggested by one of the lady-librarians in the public library  and had to be Jane Austen focused. Each month one of her major novels. I liked the idea so much when she contacted me that I immediately accepted. The ups and downs of our group are told in my journal of the meetings on My Jane Austen Book Club. The fact is that book groups have started haunting me, well, more precisely I’ve become a little obsessed. You thought I was a bit fixated with Richard Armitage? Incorrect. Not only with him. I have many interests, few obsessions and one weakness. For instance, I’m often  surfing the Net to know more about book clubs so that I can read about  reading groups, I’m interested in other bloggers’ ideas and impressions about "group reading". I also re-watch The Jane Austen Book Club from time to time (lovely comedy!)
While surfing the Net for some reasons of the said, I discovered the existence of  this Brit TV series , shown on Channel 4 between 2001-03,  and I was so curious to see it! So curious that I  did it. Just the first series , though. Might this  help me to improve my own group? 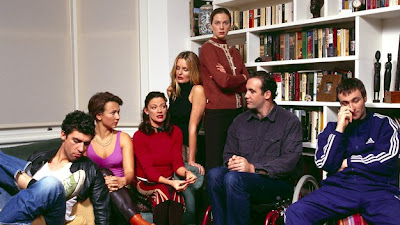 Channel 4 The Book Group - Sex, Drug, Football  ... what about books?
Quirky comedy, six episodes and rather  unknown-but-good actors and actresses (at least to me!) this series is set in Scotland, Glasgow, and turns around a group of completely different people who gather together in a Book Group: the earnest wheelchair-user Kenny;  uptight  depressive mother-haunted American Claire who starts the group to meet new people;  football fetishist  gay Rab;  eccentric , intellectual but perpetual student , and drug-addicted Barney; frustrated wife of a Scottish footballer, Janice; and finally definitely shallow Fist (Dutch) and Dirka (Swedish) both married to footballers and really bored by their lives. 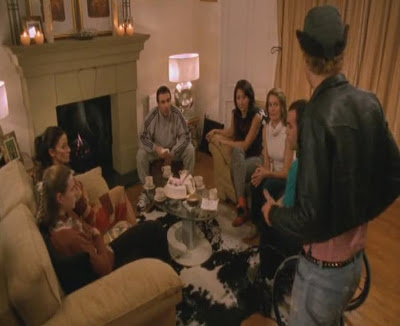 At the time of the airing the two series of The Book Group  proved to be a favourite with critics. They also regularly drew a respectable audience of more than 2 million viewers . What was my reaction? At first ... disorientation, since these people  meet to discuss a book but actually never succeed in discussing it properly, since most of the action is not based on books, since I expected something totally different . However, after that first moment of astonishment, I started liking it because it was...it was... quirk , as I said, and so different from any other series I had seen so far. I started liking the absurd situations narrated and just enjoying the odd twists reserved to the audience. The ill-assorted mix of people and their interaction was just amusing and entertaining but it also stimulated  my my emotional involvement , my sympathy  for that  unlucky bunch of mates. 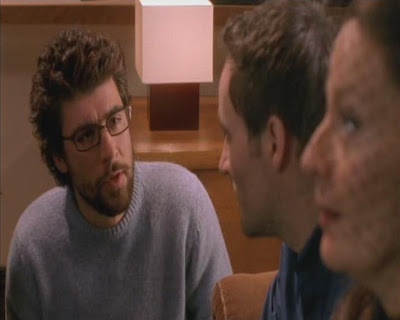 In fact, essentially it's a look at several unhappy characters, they're all unhappy, or insecure, or sexually frustrated in some way, and the combined misery of all the members of this 'book group' all seem to clash in every meeting they have. The first series all dealt with each one's attempts to hit onto each other one; Claire was in love with Barney, Kenny in love with Claire, Dirka & Fist both in love with Kenny... Don't worry, it is not only that,  it is also a good character study and fun-poking at some of the most depressing and heart-breaking human emotions. It's black comedy, it makes you laugh even though there's nothing funny about it.
I've found this clip of one of the most entertaining scenes in Ututbe. The writer of the book they have decided to read this month is hidden and listening to their absurd discussion about his own novel ( he's got an affair with Janice, one of the group, the one who is holding the meeting in her luxurious home) . He can't bear the fact that they got everything wrong and ... Just have a look if you've got some time!
You can get the DVD at a very low price and have some fun if you feel like . The series is fresh and original, with black humour, very witty writing and a sense of the absurd intermixed. It's well worth a look! So distant from my period /costume film standard? You're right . So what? I myself find myself so ... unforeseeable at times!
OFFICIAL SITE AT CHANNEL 4
Posted by Maria Grazia at Thursday, June 24, 2010
Email ThisBlogThis!Share to TwitterShare to FacebookShare to Pinterest
Labels: My DVD collection

I've seen this around, and I know that Heidenkind of Truth, Beauty, and Freedom also mentioned how good this was. She saw it here in the States on Ovation. It doesn't seem that we can get it here anymore though. I'll have to keep my eye out if it becomes available here though.

BTW, you like reading and books, so not that far of a stretch for you. :)

@Becky
As I wrote, Becky, it is very little about books and very much about ...unhappy lives. It is quirk,absurd, with very modern language but ...I unexpectedly liked it very much though it was not what I expected. I saw it on DVD. The episodes last about 30 min. so it was 3 hours' watching on the whole.
It is far from what I usually watch, believe me!
( A part from a certain Strike Back series I've recently watched, but you see, I must admit I go on widening my ... horizons!)

Reading about your JA group at the library, I felt quite envious, as we don't have such exciting activities at the local library, though they usually organize many meetings and movie screenings. I'd love to join a book club if I had the chance, because in my mind I feel they are sort of a "group therapy", helping people working on themselves by thinking about characters. Though I don't really look like a shy person, I'm pretty bashful and introverted, so I enjoy the idea a lot :-)

@Claudia
We are going to have the 6th and last meeting of our JA Book Club next next Saturday, Claudia. Will you join us?
Thanks for stopping by!
Buona serata
MG

I really enjoyed watching The Book Group when it was on TV here, thanks for letting me know about the DVD.I was born in Glasgow so it appealed to me for that reason too. I've seen all the actors in various different things now, they seem to be doing quite well.
There aren't any book groups around here either, you are lucky.

@Katrina
I've only seen the first series, now I want to go on. I'm glad the actors had other opportunities in other projects. They are good. As for book groups, we all are lucky enough to meet and discuss our readings on line. With such a huge community it is easier to find people loving the same things. Real life book groups can be much more complicated. And disappointing sometimes!

Join your group? I'd really love it! I'm going to think about it and see if I can come to Rome, since I'm living a very tricky moment at work. I'll let you know soon, THANKS!