For this event hosted by Jenny at TakeMeAway , this time I've chosen a beautiful novel I've been recently re-reading pages from with my students, MRS DALLOWAY by  Virginia Woolf. Throwback Thursday is a corner to write about good reads from the past. Those books we so much loved and we don't want to forget .
I've been teaching about epiphanies in Joyce as well as  moments of being in Virginia Woolf and I think I've  had one while reading Mrs Dalloway with my students few days ago. 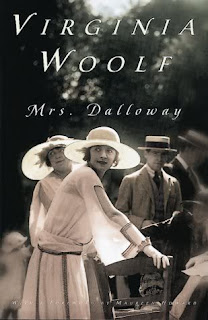 " ... Clarissa Dalloway has recently  turned 51 ... The novel covers one day from morning to night in her life. Clarissa Dalloway, an upper-class housewife, walks through her London neighborhood to prepare for the party she will host that evening. When she returns from flower shopping, an old suitor and friend, Peter Walsh, drops by her house unexpectedly. The two have always judged each other harshly, and their meeting in the present intertwines with their thoughts of the past. Years earlier, Clarissa refused Peter's marriage proposal, and Peter has never quite gotten over it. Peter asks Clarissa if she is happy with her husband, Richard, but before she can answer, her daughter, Elizabeth, enters the room. Peter leaves and goes to Regent's Park. He thinks about Clarissa's refusal, which still obsesses him... (Clarissa Dalloway is 51!?!) " 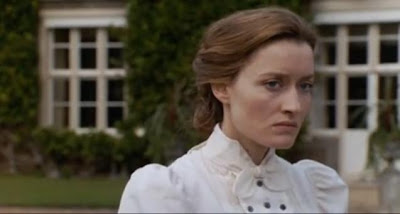 (Young Clarissa refusing Peter Walsh)
I went on talking to  my silent 19-year-old students ,  I was telling them something  about the plot of this novel before reading some passages to them when ...my heart leapt into my mouth... I was talking about Clarissa Dalloway as if she was so much older than me but she actually wasn't! I'm not that far from her age! Why hadn't I realized before? Last year, for instance? Because my mind goes on kind of disconnected from my age. Does this happen to any of you? Not that I go on acting as if I were in my twenties but, I must admit , I have to make an effort to remember how old I am  when asked. And when,  after the effort of recalling,  the answer comes to my mind ... oh, gosh! ...my heart leaps into my mouth, just as it happened while explaining  Woolf to my students. Does this actually means I am becoming old?  What I'm sure of is that I read Virginia Woolf's Mrs Dalloway with a greater sense of self - recognition this year.
Let's go on with the plot of the  novel... 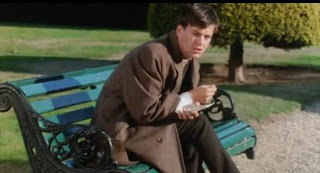 The point of view then shifts to Septimus, a veteran of World War I who was injured in trench warfare and now suffers from shell shock. Septimus has an Italian wife, Lucrezia, they pass time in Regent's Park. They are waiting for Septimus's appointment with Sir William Bradshaw, a celebrated psychiatrist. Before the war, Septimus was a budding young poet and lover of Shakespeare; when the war broke out, he enlisted immediately for romantic patriotic reasons. He became numb to the horrors of war and its aftermath: when his friend Evans died, he felt little sadness. Now Septimus sees nothing of worth in the England he fought for, and he has lost the desire to preserve either his society or himself. Suicidal, he believes his lack of feeling is a crime. Clearly Septimus's experiences in the war have permanently scarred him, and he has serious mental problems. However, Sir William does not listen to what Septimus says and diagnoses “a lack of proportion.” Sir William plans to separate Septimus from Lucrezia and send him to a mental institution in the country.
This theme of shell - shocked veterans from WWI is quite recurrent on my blog these days (Regeneration, A Month in the Country) and I do  find it quite interesting . It is especially interesting to see how Woolf deals with it. In fact,  she wrote “I adumbrate here a study of insanity and suicide; the world seen by the sane and the insane side by side” (14 October 1922).  At the end of this story Septimus will choose death and Clarissa Dalloway life (and old age),  but all through the day they will often be in the same places in London reacting differently to the same events, watching with different eyes the same reality. They share much, though.
Let's go back to my notes... 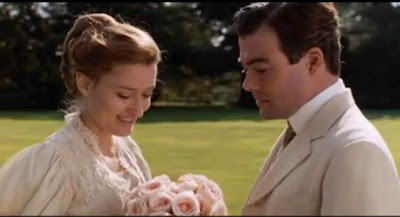 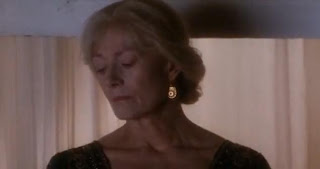 Constantly overlaying the past and the present, Clarissa strives to reconcile herself to life despite her potent memories. For most of the novel she considers aging and death with trepidation, even as she performs life-affirming actions, such as buying flowers. Though content, Clarissa never lets go of the doubt she feels about the decisions that have shaped her life, particularly her decision to marry Richard instead of Peter Walsh. She understands that life with Peter would have been difficult, but at the same time she is uneasily aware that she sacrificed passion for the security and tranquillity of an upper-class life. At times she wishes for a chance to live life over again. She experiences a moment of clarity and peace when she watches her old neighbor through her window, and by the end of the day she has come to terms with the possibility of death. Like Septimus, Clarissa feels keenly the oppressive forces in life, and she accepts that the life she has is all she'll get. Her will to endure, however, prevails.

I love this novel, melancholic and tragic as it is, I just love it.
( The pictures and the clip in this post are taken from  Mrs Dalloway 1997 )
Posted by Maria Grazia at Thursday, June 03, 2010
Email ThisBlogThis!Share to TwitterShare to FacebookShare to Pinterest
Labels: Books, From my bookshelf, Throwback Thursday

I guess I need to read this book!
I am wondering if you have seen the movie "The Hours" which was supposedly based on this book. If you did I would like to know what you thought of it?
Thanks for the great post, Maria Grazia!

@phylly3
The Hours is a wonderful novel I read several years ago. It'd be perfect for one of my next Throwback Thursdays! I also saw the movie, which is quite good too. But, as it often happens, I prefer Michael Cunningham 's novel.
Thanks for commenting, P.!

This book is wating for me on my TBR pile. I like VW, but I've only read her essays. It's time to read one of her novels.

@Luciana
Her essays are extremely interesting but reading Virginia Woolf's interior monologue is not an easy task, her narrative technique can be puzzling and following the flow of thoughts of her characters rather complicated. Anyhow, Mrs Dalloway is not her most complex work. I hope you'll enjoy reading it.