CHARLOTTE HAWKINS, THE TEMPEST (A Guy of Gisborne Story) 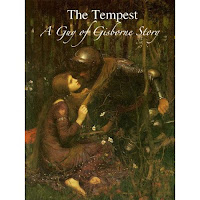 Sir Guy of Gisborne is a fierce , brooding knight. He is both feared and scorned by those under his command. But under his harsh exterior is a lonely soul, haunted by his many sins ...
Cassia is a peasant with a gift for healing... and a secret longing for the feared lord Gisborne. When fate thrusts him into her hands, she quickly learns that he lives up to his dark reputation. But she also discovers there is more to him than meets the eye...
These are the protagonists of THE TEMPEST , A GUY OF GISBORNE STORY , a novel I asked the author herself to introduce to you not long ago. Sarah Pawley, pen-name Charlotte Hawkins. Do you remember my interview with her ? And there was also a double giveaway of the book on that occasion. I received it directly from Sarah, it arrived last Friday by mail and I couldn't resist reading it at the weekend since I was fascinating by the idea of  a story in which the unfortunate fate of Gisborne had been changed. After watching BBC Robin Hood for 3 series and Richard Armitage's stunning performance as  evil black leather-cad Guy, it is impossible not to recognize him in this story. Sarah said she was partly inspired by Richard's Gisborne while writing her story but I must disagree: her hero is totally and utterly the Sir Guy we so well know with  his smirks and frownings, his evil glares and his looks of contempt. 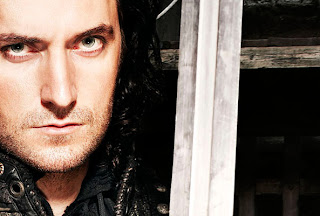 Just read this brief excerpt: "His arms were crossed, his broad shoulders hunched. His head was lowered, causing the unruly waves of his dark hair to fall forward, almost covering his eyes. Except for the red and gold coat of arms etched upon his surcoat, he was dressed entirely in black. His long legs took up great strides as he moved back and forth, giving him the likeness of a prowling panther. Impatience was written in every line of his face and figure..."
Does that remind you of ... anyone? I couldn't avoid thinking of Gisborne, waiting  for the same bride, Lady Marian. Well,  yes, also at the beginning of "The Tempest" Gisborne is going to marry Marian and is waiting for her at the altar. But  apparently and at first,   the story  goes on like in the series while in the following pages the mocked man's initial disappointment  becomes furious anger, Marian is imprisoned for her betrayal and things start turning out to be very different after a while. Very different from the story we know, I mean. 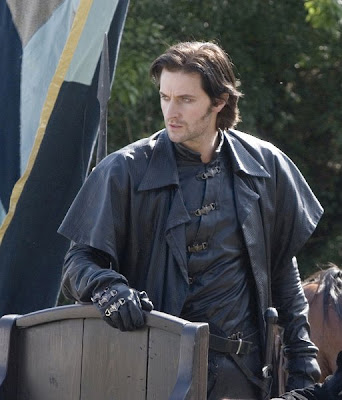 Fan Fiction is a trend I've  only lately discovered thanks to friends and  blogofriends . It's quite an interesting, fascinating world, made of infinite variables. It is, first of all ,  great fun. It makes the fictional characters you love - from films, TV series and books - go on living in other stories, beyond  the words "the end", beyond the last word in the last printed page. And when in these sequels or  spin-off stories you find your heroes and heroines get what they deserved , but coudln't have in the original tale, well , you feel very  satisfied,  at last.
This is what happens to Gisborne here: he got his redemption thanks to a woman's love, he discovers what being loved means and how being appreciated and not feared makes you feel happy.
I particularly like the first half of the novel, where Guy keeps his bold,  cheeky , quite ill-tempered self that causes amusing skirmishes between him and Cassia. Quite amusing,  until everything becomes  different: a passionate love story. 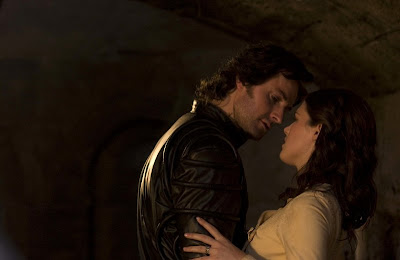 Warning. The adult content juxtaposed to the mind  projection of  a certain familiar T(all) D(ark) H(andsome) bloke can make  female readers become very, very naughty and start dreaming very, very naughty things.
May serious literature teachers like stuff like this? After reading huge quantities of Austen, Victorian literature, commited writers and the like? Yes, they can find them delightfully sinful! Ehm... let's go back to seriousness. 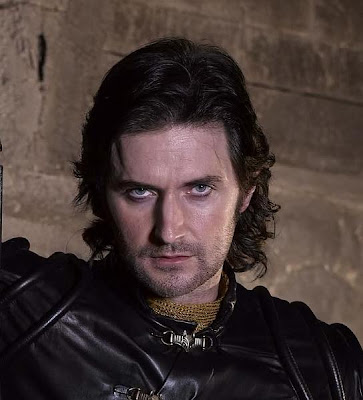 Serious enough?
Let's have a look at the heroine now. She's proud, stubborn, strong-willed, brave and extremely beautiful of course. And she loves Gisborne devoutedly, even before she actually meets him (Have you ever loved at a distance? ) She's loyal to him and manages his aggressiveness without being scared of him . She can see beyond his rough surface, directly to his wounded haunted soul longing for love. They are just a perfect match. Too perfect to be true? They are , in fact, romantic fictional characters created to help readers dream, escape, amuse themselves.
From perfection,  we come to the flaws...
Guy's relationship with the sheriff (here, Wiliam Briwere) is based on strong dependence, awe and subjection . Cassia's bond to her father (Robert De Warren) is based on love, loyalty and obedience. But when they meet and hit it off with each other,  they are ready to forget and break any other tie in their lives forever... What will happen to the happy couple after the last word printed on the last page of this novel?
There's already an answer since Sarah has recently posted the first pages of her new novel, REBEL MINE ,  which is a sequel to THE TEMPEST, on her blog ( HERE) . A promising beginning, full of tenderness and joy. What is going to spoil that perfect idillic family picture? I'm eagerly waiting to know.


ANOTHER DOUBLE GIVEAWAY!!!
Check Sarah's blog, From the Quill Tip, there's a giveaway ending on July 6th. Leave your comment there + your e-mail address. You have a double chance to win a copy of The Tempest.  You'll get it directly from the author with a very personal dedication.
Posted by Maria Grazia at Tuesday, June 22, 2010
Email ThisBlogThis!Share to TwitterShare to FacebookShare to Pinterest
Labels: Books, From my bookshelf, Guy of Gisborne, Richard Armitage

Thanks for the review, Maria! I love the feedback. I hope to have another post ready soon. :)

I just ordered this book and can't wait to read it. Good to hear there will be a sequel!

I hadn't checked your blog in a few days, so I was really excited to find this review to read! (I was just about to email you and ask if you'd received/read "The Tempest" yet.) Like I said, you have a talent for writing reviews. :)