Yes, I know, it’s Tuesday but I had no time to write in the last couple of days. I’m supposed to be on holiday since I stopped giving lessons, but , do you know teachers go on working after that? So, I’ve just found some time to write down a brief report of my delightful Sunday! 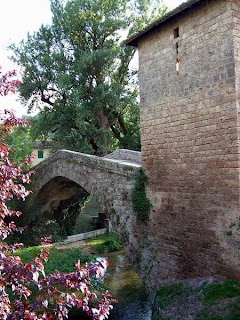 I live near Rome, among beautiful mountains and in wonderful wilderness. My town  (Subiaco, on the left,  medieval bridge)  is small and ancient and I love living here. I am always rather busy at weekends and I stay at home coping with the housework left behind in weekdays. Last Sunday I was invited to join two special friends on a trip and decided to leave everything apart: school deadlines and ironing piles, husband and sons!
Ariccia and Nemi are very picturesque small towns I had never been to, they are really close to Rome. The landscape is similar to the one I’m used to , but they are near volcanic lakes, just pretty spots of greenish blue among the mountains. I am usually so attracted by lakes and the sea! But it is odd because I’m afraid of water and can’t swim. 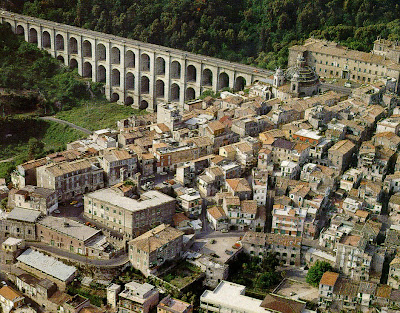 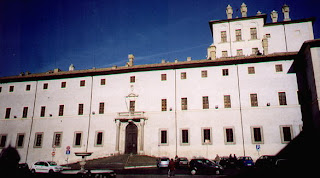 In the morning we visited Palazzo Chigi in Ariccia, a luxurious baroque country residence, which belonged to one of the most powerful families in Rome. It was given to the City of Ariccia on 29th December 1988 under special conditions, by Prince Agostino Chigi Albani della Rovere, and is now a museum and cultural centre, hosting various activities such as exhibits, concerts, guided tours, meetings, and the like.
Begun in the second half of the sixteenth century by the Savelli family, the palace was transformed into a lavish baroque home between 1664 and 1672 using plans by Gian Lorenzo Bernini, with the collaboration of his young student Carlo Fontana.
The most curious place  in the palace is called , “la stanza delle belle”, the room of the beauties; in it, Cardinal Flavio Chigi collected the portraits of his beauties … his lovers!There are so many on those walls, not all of them so beautiful,  but Cardinal F. C. didn’t waste much of his (free) time!
This stunning location has been used to shoot period series and movies more than once. The most remarkable of them is Luchino Visconti ’s “Il Gattopardo” ( The Leopard, 1963) starring Alain Delon, Burt Lancaster and Claudia Cardinale. 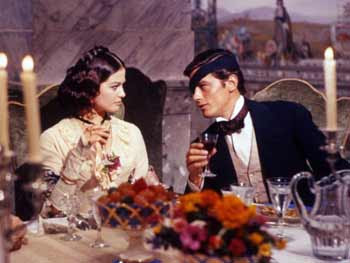 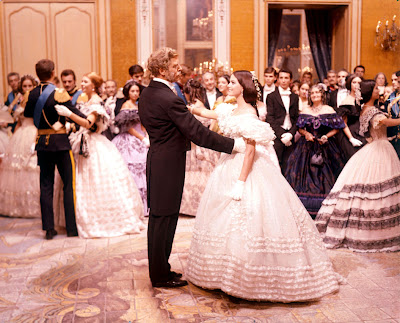 It was not only Art and History, mind you! We ate in a typical “fraschetta” (inn) in Ariccia … we ate a lot of genuine, tasty food at a very special price. They said it was an appetizer but , good God! … it was impossible to finish all that goodness! 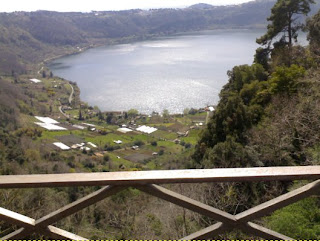 After lunch we moved to Nemi, a pretty ancient resort overlooking a small volcanic crater lake. We had our dessert there, a very special one, “fragoline di Nemi” (strawberries from the area) with ice- cream. A delicious tasty completion for a great trip. We sat on a terrace, admired the lake, tasted the strawberries and chatted pleasantly. We were free to share our opinions on everything we like or dislike :  books, Tv series, colleagues (we work in different places and they are not teachers like me, lucky them!) , families , next holidays, dream holidays, friends … yes … we talked a lot… am I forgetting anything …? Well, a certain Brit bloke. A tall, dark, handsome guy ... He was very often the subject of our conversation. Any guess?

(Nemi - Rome)
What a lovely Sunday! Thanks to my friends for planning it and driving me there! It was just the right way to gather some enthusiasm and energy to start the school meetings I’m having these days. They can be stressing, they are the worst part of my job: assessing and deciding who fails, who passes ... not easy matters, not stuff that I particularly like.
I only regret I forgot my camera! These pictures are taken from the Net!!!
Posted by Maria Grazia at Tuesday, June 15, 2010
Email ThisBlogThis!Share to TwitterShare to FacebookShare to Pinterest
Labels: Trips and Journeys

How beautiful! One day, I want to go to Italy. If I'm ever near your neighborhood, you might have to be my tour guide. Lol.

You'd be welcome, Sarah! Thanks for passing by.
MG

so lovely! I was in Italy last summer (just Rome and florence) and had a wonderful time. I could visit every year

You forgot to say that you ate half of my wild strawberries with icecream and Grand Marnier, MG! ;)
Thank you for this lovely post: so many nice memories!
*hugs*,
KB

@Helen's Book Blog
I'm glad you love Italy. Come back soon and thanks for passing by!
@Karen
Forgive me, I didn't me to eat half of your strawberries but the waitress , well... I also forgot to say that one of the topics of our conversation was ... age, our age ! :-( SIGH! This is why I often forget things! LOL!!!

Good luck with those final grade decisions. I hate that part as well, especially when the student and/or parents don't agree. It looks like you had an amazingly beautiful little getaway to gear you up though. So beautiful!

@Becky
Thanks, Becky! Only teachers can understand teachers! Big Hug!
P.S. I've sent you a message via Google Friends. Did you get it?

What fantastic places! Thanks for reminding me and the other readers that Italy is not only Florence, Venice, Rome and the Amalfi coast (although I like them all!) but there is much more! I've never been to Subiaco or Ariccia or Nemi but they look great. Great you had a lovely time. Strawberry with ice-cream and grand marnier??? Heaven! Baci. A.

@lunarossa
Think, A., that I live nearby and I was there first time only last Sunday! There are still so many beautiful places I'd love to see!
Well the strawberries with grand marnier were for my friend K. but the waitress gave them to me and I partly ate them! I only realized they were with that liquor when I had eaten half of them! We laughed a lot!
Thanks for commenting. Un abbraccio.MG.

This post reminded me I miss Rome a lot. I really need to plan a new trip there, I'm realizing I visited Rome more than three years ago! Maybe this summer...

Ciao, Claudia!
Thanks for passing by and commenting. I'll wait for you in Rome, then!

A gorgeous Sunday! My father just called me this morning from Firenze, to brag that he was eating at my favorite restaurant. Between this post and that phone call, I am in full wanderlust mode.

Wow! So beautiful! I would love to visit there some day. Do people swim in the crater lake? It must be quite warm there now. It is finally starting to feel like summer where I am.
I am glad you enjoyed a lovely day!

@Phylly
I couldn't see anybody swimming in the lake from up there where I was but I think it may happen in the summer. It's quite hot here. Summer has come at last!
Special hug to you, P.!