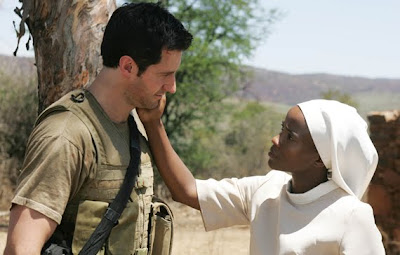 “Are you a good man sent by God, Mr Porter? Or evil, not to be trusted”?
Again  ( my previous post HERE ) this doesn’t want to be a proper review but just notes about my impressions and reactions to the  other episodes of STRIKE BACK. Just my very personal way of watching it . This time I’d like to start with me changing my mind:  I liked episodes 3 and 4 more than the first two ones, and episodes 5 and 6 immensely!
Richard Armitage must always be trusted ..."Whatever happens,  you must trust me... trust me!" had said John Porter in episode 2 and he was right. 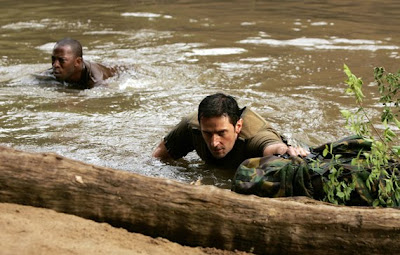 EPISODE 3-4
Strike Back all action hero with a gold heart has come completely to the light little by little, episode after episode, and – pulp, bloody scenes included - he has touched my heart. Who doubted it? I , first of all. I didn’t imagine I might come to sympathize with this hero, not at all. 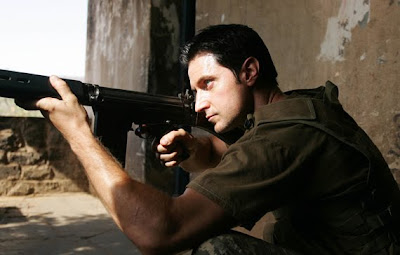 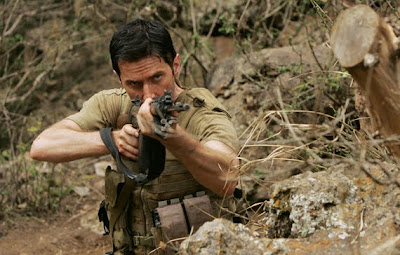 Look at him! Boldly showing off his muscles, his power and strength , aiming his gun at his foes. Not my kind of hero, indeed! But he risks his life, supporting and helping the weak and the subjected in ep. 3-4, fights and feels pity, strives to escape his sense of guilt in search for atonement, sympathize with people’s sufferings , keeps up his strength until exhaustion in the service of others, bravely bears physical efforts and pains. He is strong-willed , smart, talented, resourceful but, and especially, generous and sensitive. What more can one ask for? 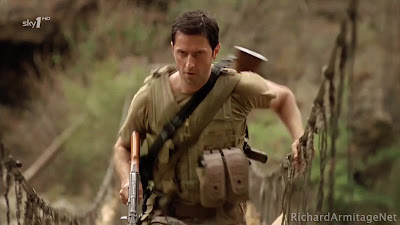 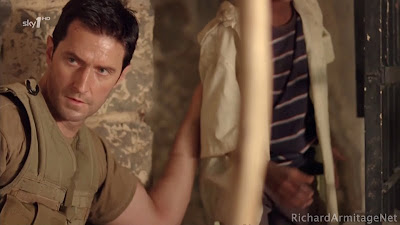 His family ties remain the least plausible part in the story but JP’s suffering , while trying to console his teenage daughter at a distance, his caressing her face on a laptop screen with distress painted on his  deeply moved face, was one of the most compelling moments in this second part set in Zimbabwe. The script, the dialogues, are again rather simple and full of ... well ... you know what I mean! 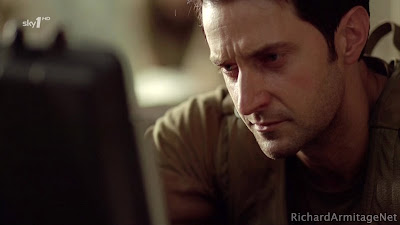 But I enjoyed watching these two episodes more than the first two ones and  I even  bore the violent moments better, much better. Not that I  liked all that shooting but I tried to control my reactions which are always quite exaggerated. I liked them,  though  the prison scenes were full of clichès and the second part,  with the darling nun slapping poor JP on his face for killing so easily and taking care of all those orphans,  was also a bit déjà vu.
What is surprising is just the complex personality of this new action hero who doesn't hide his fragility. And that , I'm sure,  is what Richard has brought to JP. This especially in the closing episodes. 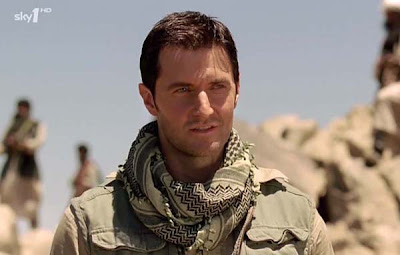 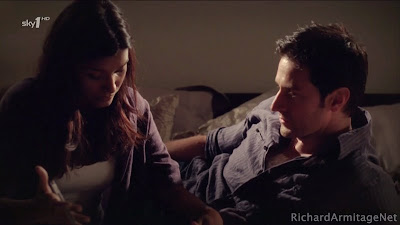 The final episodes , 5-6, were definitely the best in the series and they took me stuck at my pillows in total ravishing emotions each second of the two  hours' watching . I was moved more than once, touched deeply, and even whispered out : "... incredible man, unbelievable JP!" I was not swept away by his shirtless gorgeousness or his successful escaping strategies,   but by his humane skills. The minefield  scene and the final confrontation with Collinson left me breathless and so thrilled!  I can assure you more by the words and the looks than by the hectic action. 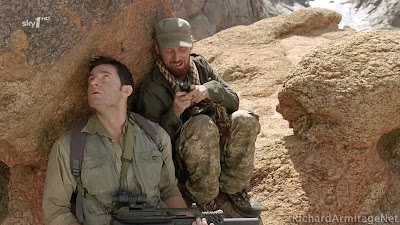 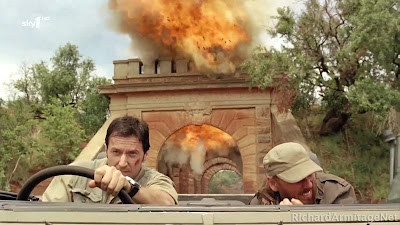 I don't want to give away much, for those who haven't seen it yet to enjoy it fully,  but let me  confess I felt for the ginger bearded Gerry Baxter I had hated at first and, unexpectedly, for treacherous Collinson too. It was as if I could experience the same overwhelming sensations John Porter was experiencing in those moments: he could feel total empathy for  those two men  and their disgraced destiny and pitied them, with no sense of judgement and sincere forgiveness. No hatred and no revenge for John Porter but forgiveness.  And, in the end , my new-born sympathy for JP had turned into  huge admiration. 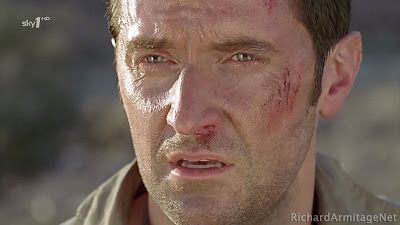 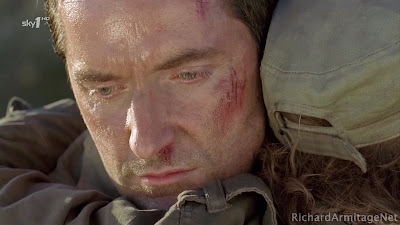 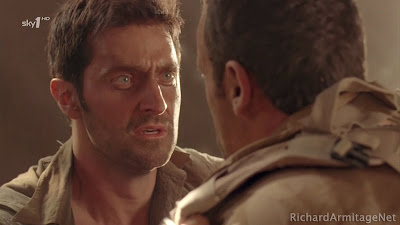 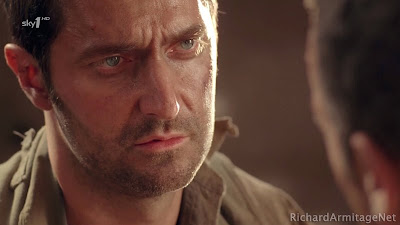 Now I'm happy I  have another John to love among Richard's characters. After JS ( Sparkhouse), JT ( North & South) and JM (Drowning not waving, Moving on series), I will be indebted forever to JP , Strike Back hero, for a special gift:   first tears  performed by Richard on screen and beautiful touching moments. 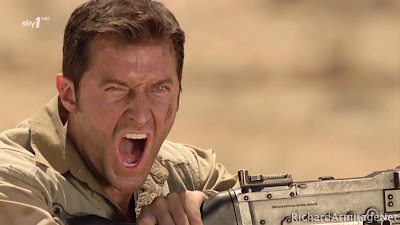 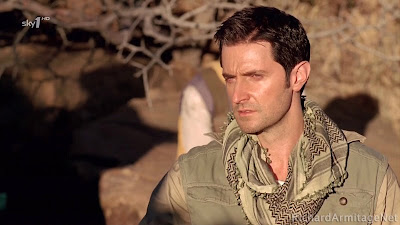 "I've got the answer to my question, Mr Porter. May God protect you”
Posted by Maria Grazia at Friday, May 21, 2010
Email ThisBlogThis!Share to TwitterShare to FacebookShare to Pinterest
Labels: Richard Armitage, Strike Back

I really hope we get to see this in Australia soon! And I have to say that camo gear and dirt really brings out the blue eyes!

I watched episode 5 earlier, and while deleting episodes of Supernatural to free up space on the DVR, I seem to have deleted episodes 1+2 of SB. D'OH! Now I'll be obliged to get a hold of the DVD! (Which might have extras on it - ooooh.)

Great thoughts on the series, and thank you for sharing them with us. :) I agree, Porter is dreamy... in the sense that he's not just the big, tough guy who can kick butt but also a sensitive, caring, intelligent and altogether decent bloke who is a TRUE hero. He has flaws, sure, but thank goodness for that! He's not just some macho action superman, he's a fairly regular guy. No, he's a gorgeous regular guy, who keeps losing his shirt every ten seconds. Not that I'm complaining. ;)

Have a great weekend!

I'm glad you liked the last episodes best. And that it didn't turned out to be only violence after all!

I liked eps 3-4 although they were fully packed of clichés, but absolutely loved 5-6, because there was fast-paced action, very good acting by everyone, and some funny lines too.
And, at last, we got some dialogue!
Richard's acting was.... well, extraordinarily good, and also moving at times.
Yes, I agree: characters named John are among his best performances, definitely!
(Oh, with the exception of Guy, ça va de soi ;-D )

I haven't watched the final episode yet but I have really enjoyed this series! Has your son watched all the episodes? I will be interested to hear what he thinks. The digital spy forum has favourable comments from quite a few of the male audience which bodes well for the popularity of the show and a possible re-commissioning :)

@Mulubinba
Since my son has watched and liked epp. 1/4 very much, I think he'll love the final episodes as soon as he sees them. He hasn't done that yet!
I'm glad to hear male audience have been quite positive. This series deserves popularity and a re-commissioning, of course!
Have a great weekend!

Excellent overview; I agree with so many of your perceptions and esp about the family ties question being the most problematic aspect of the script.