BOOK REVIEW - THE EDGE OF DARK BY PAMELA HARTSHORNE 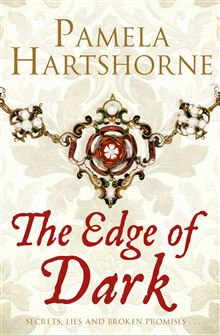 A dark, page-turning tale from Pamela Hartshorne, author of The Memory of Midnight and Time's Echo, and a perfect read for fans of Barbara Erskine and Diana Gabaldon's Outlander series.

Part of a trilogy

This novel shares much with the previous two in the trilogy, Time’s Echo and The Memory of Midnight - which I both read and reviewed - but it is not a sequel, nor a prequel,  the three plots and the characters are not related any way.
The three novels share the geographical setting (York), the time-slip pattern (Elizabethan Age/present day), the presence of supernatural events and the fact of having two female protagonists.

In The Edge of Dark, the two heroines live in distant eras but share a great deal of tragicality in their respective lives. Roz Acclam is the only survivor to her family’s slaughter by fire and Jane Birkby faces the outcomes of her vow on  deathbed  and the hardship of being a woman in the 16th century. “Beware what you wish for” may well be the leit motiv for them both.

Jane believes in keeping her promises but she’s caught on a twisting path of deceit and joy that takes her from the dark secrets of Holmwood House in York to the sign of the golden lily in London's Mincing Lane. Getting what you want, Jane discovers, comes at a price. For the child that she longed for, the child she promised to love and to keep safe, turns out to be a darker spirit than she could ever have imagined.

Over four centuries later, Roz Acclam remembers nothing of the fire that killed her family - or of the brother who set it. Trying on a beautiful Elizabethan necklace found in the newly restored Holmwood House triggers disturbing memories of the past at last - but the past Roz remembers is not her own .

The rich descriptive pattern and the care for the details let the readers live in their minds the changes of landscape Roz experiences.  She finds herself displaced,  when she realizes that what is happening to her is not simply "dreaming" another person's life, Jane’s  life in the 16th century. She really suffers in first person everything Jane felt and suffered in the past.  Despite being distressed and scared, Roz wants to discover what happened to Jane and starts a quest which is also a journey of self-discovery and self-revelation.

In the opening, the readers find themselves caught in medias res, plunged into a gripping, overwhelming,  if not shocking,   event involving one of the two protagonists. From that moment on, they can't stop wondering what's next!

That is what  happened to me while reading The Edge of Dark. Its intriguing mystery tale got me hooked, I simply could  not put it down, so I read it in a very short time. Fast paced and drawn on two intertwined time-lines, the narration rhythmically slips from one to the other, building up suspence and thrill page after page.

What I said for The Memory of Midnight  is also true for The Edge of Dark: "It's an intense story which takes the reader on a thrilling, dramatic ride, blending romance and brutality, supernatural and accurate historical fiction, psychological insight and action".

About the author: Pamela Hartshorne


Author, historian, project editor, freelance writer, editor, proofreader, tutor, traveller, walker, talker, card player, food lover, Pamela is fascinated by the relationship between the past and the present, in fact as in fiction. 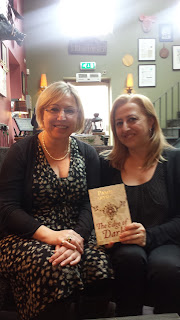 I was in York for a long weekend in March and, on that occasion,  I met Pamela Hartshorne for a chat on a coffee. Our meeting was arranged by my good friend Antonella, who is Italian but lives in York.
Antonella had met Pamela at one of her book signings after she had read the copy of Time's Echo I had given her after posting both a review and an author interview here at FLY HIGH! "You live in York! - I had told her - You must read it, it's brilliant!"

So Pamela and Antonella practically met each other through me and my blogging activity and they have been seeing each other in town from time to time. We had to celebrate the fortunate coincidences that had brought the three of us in contact  and we finally met on a Saturday morning in York!

We had a lovely time chatting about several interesting topics, especially writing and research, Pamela's future projects and her busy life. We also talked about ghosts and York or which were the most interesting historical periods to read or write about to us. Although Pamela was really busy - she was going to leave for London on a working trip in the afternoon and planning an event to present The Edge of Dark in York - she was extremely kind and found some spare time to meet us. She gave me a copy of her new book on that day,  which I'll treasure on  my shelves with the other two  in the trilogy.