QUICK, LIGHT, ROMANTIC SUMMER READS: IN A CLASS OF HIS OWN AND UNMAPPED COUNTRY (THE STORY OF NORTH AND SOUTH CONTINUES) 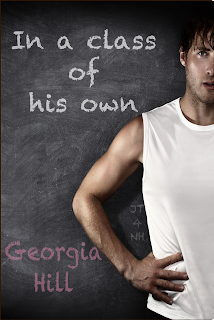 In A Class of His Own by Georgia Hill
I am used to seeing gorgeous male teachers, well they are often gorgeous on TV, especially in American  series! Only ... I have been a teacher for such a long time now and 1. men teaching as their profession are very rare beings (the great majority of teachers are female in Italy) 2. handsomeness is not the most common peculiarity in teachers (writitng female one included).
So when Georgia Hill was my guest and I posted the cover of her latest book, In a Class of His Own, I immediately became curious to discover more about the good-looking bloke featured on it. "A gym teacher, I bet" was my first thought. But no, I was wrong. The man in question was the headmaster! "I must read it!" was my second thought.

Synopsis  (from Amazon.com)
Forsaking the bright lights of London, Nicky Hathaway comes to live and teach in a sleepy Herefordshire town. She’s expecting the quiet life but then Jack Thorpe takes over as her headmaster...Nicky is a woman who won’t take no for an answer and soon all sorts of sparks are flying between her and the implacable but gorgeous Jack. But, is it hate or love that’s growing between them? And just what is Jack’s big secret?


I read this lovely romance in a couple of days while on holiday in England. It was amazing to read it just while I was in Lyme Regis because a romantic key scene (well, it was supposed to be romantic but ... ok,   no spoilers) is set just there. What else can I tell you without giving away too much? Well, it takes a while for the two protagonists to find their way to happiness. What is more gratifying than delayed gratification? And finally, if you are looking for an easy quick summer read which is also sexy and sassy, this one is for you! 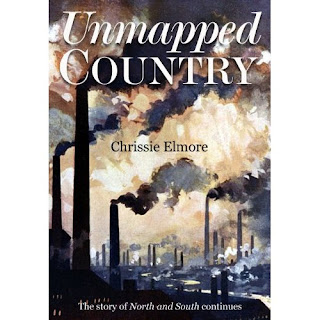 I've just finished reading this e-book on my iPad. It also took me a couple of days. The cover says : The story of  North and South continues. How could I resist? Chrissie Elmore has recently published this sequel to Mrs Gaskell's novel, a what if story which starts from Margaret's journey to Milton to make her business proposition to Mr Thornton, soon  after she heard of his financial failure. This is actually something we saw in the TV series, because in the book Margaret and John Thornton meet in London after a year she had left Milton and the generous proposition takes place there, in her cousin Edith's house.
However, like in the TV series, in Unmapped Country Margaret meets Mrs Thornton first, John's stern mother,  and the meeting is as harsh as we remember it. Unfortunately, neither the meeting between Margaret and John comes out as very successful,  so here is the occasion for more than 300 new pages of romantic longing and misunderstandings. 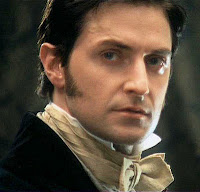 Think of Manchester in the mid Nineteenth century and mention Margaret Hale & John Thornton to people and many will immediately tell you how they fell in love with North & South by Elizabeth Gaskell. For them this will be an extension of the extreme pleasure they had first time round. As the author has discarded Mrs Gaskell’s much disliked ending (even by herself), John and Margaret’s struggles continues. Will they ever truly understand one another? Or will their opposing ethics and social prejudice force them to seek companionship with more appropriate partners?Written in the original’s Victorian style, the frenetic city and the original participants all stay true to Mrs Gaskell’s creation, while contemporary events and new characters both help and hinder John and Margaret’s progress towards a conclusion.

What is especially to appreciate in this new sequel to North and South is Chrissie Elmore's effort to stay true to Mrs Gaskell's language and style. Each page is the result of a serious work of research and documentation  both as for the diction and for the historical, social and economic context which took her years.
There are new characters that interact with the ones we know from the original story and animate  Milton scene with new relationships and twists. However, dear readers unfamiliar with this unforgettable classic don't worry, you need not turn away. Elmore's  novel stands alone and only entices you to discover the back-story. And if you have any doubt, you can always ask me. I  never have enough of this story!

What do these two novels have in common? Romance, delayed gratification and the haunting presence of handsome , tall, dark haired, blue-eyed hero. Last but not least, you can easily find them both on Amazon Kindle Store.
Posted by Maria Grazia at Monday, August 06, 2012
Email ThisBlogThis!Share to TwitterShare to FacebookShare to Pinterest
Labels: E-books, From my Kindle reader, North and South, Reviews, Romance

@Herba
You're welcome! It's always a pleasure to share. I'm reading several different books these days. These two ones were lovely.

Lovely to hear about another North and South continuation! Thanks for the review!

Although I never go by looks when a male teacher is a good teacher, hard to find as it is, it's ultra sexy, I admire & respect any teacher for that matter. :) I will put that book on my wish list!

@Fanny/iz4blue
Yes, a new sequel for N&S. It has just been released and it was a surprise to me too and I'm was glad to add it to my N&Ssequel shelf.
As for the male teacher in A Class of his Own, he's not simply a teacher but the headmaster :-) Never met a young and gorgeous one. Where do they live and work? But, like you, I never go by looks when a male teacher/headmaster is a good one!
Thanks for your comments :-)

Yay. A new North & South sequel! Thanks for sharing!!

I had no idea there was a new N&S sequel out! Chrissie, where are you?! Welcome to the world of N&S fans. You don't leave any way for your readers to contact you! Have you tagged your book as a North and South sequel at Amazon?
As more and more people find N&S on Netflix, the fanship grows. Best wishes for your success.